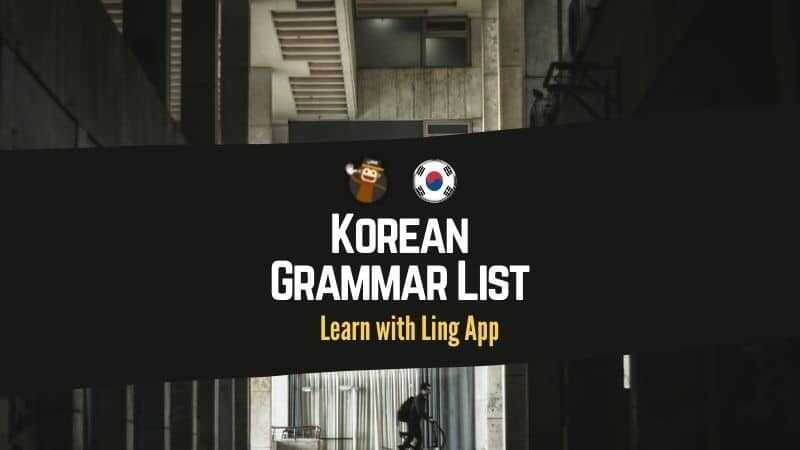 Looking for a guideline or a Korean grammar list to follow? We got you covered! In this post, will walk you through all the essential grammar points you need to know before diving into the detailed rules. If you are ready for that and more, then let's get started!

The basic English grammar structure follows the Subject + Verb + Object order. But in the case of Korean sentence structure, it follows a Subject + Object + Verb structure. Below are some examples.

In the case of simple sentences, it has the same sentence structure as English grammar, for example, Subject + Verb:

Korean pronouns are considered to be complex. You should know about the Korean personal pronouns and interrogative pronouns; The first-person pronouns are of six different types.

Most Korean people like to avoid the second-person pronouns "you" because they consider it disrespectful, so they use specific titles for the person they are talking to, like "noona" for older sister ( used by males ) or "ajumma" for an aged woman.

Korean pronouns also have two kinds, formal and informal, if you talk to someone elder or at a higher position. You have to use appropriate and formal pronouns. Otherwise, you can use informal pronouns in your daily conversation.

Nouns are considered to be most essential when it comes to structuring a sentence. A noun is a word that almost identifies everything. Korean does not have noun cases. The Korean language also does not have noun gender, articles, and plural noun forms. This is the reason why Korean nouns are easier to learn. Let's take a look at basic Korean nouns.

There are different nouns in the Korean language for time and date. Let's look at the most common nouns for time.

Verbs are the most important part of the sentences. The verb in Korean is written as 동사. They have many different rules and four different categories. These include Action Verbs, Stative Verbs, Existential Verbs, and Copulative Verbs. Korean verbs at least have one suffix, and many have different pronunciations due to the final addition of the suffix. Each Korean verb has two-part word stems and a suffix. Here is a list of some common Korean verbs that are used in daily conversation :

Korean has three tenses: present, past, and future. With the help of Korean verb conjugation, we can find out the tenses.

To express Korean verbs in the past tense, we remove the verb endings and add Verb stems like 아요, 어요, 여요. Let's look at some examples given below:

To express Korean past tense, we add Verb stems like 았어요, 었어요, 였어요. Let's look at some examples below:

To express future Korean Verb, we add Verb stems like (으)ㄹ 거예요. Let's look at some examples below:

Korean adverbs can be tricky for beginners. Even Korean themself consider these adverbs difficult. Like verbs and adjectives, Korean adverbs are also formed by removing ending words and adding stems. The adverb always comes before the Verb. Some adverbs exist in the form of adverbs in the first place. Let's look at some examples below:

There are also other particles in Korean grammar like the object particles, which are "를/을" (eur/reur). You should also know that there are different possessive particles like "-의" (hui).

Korean Adjectives Are Used As A Verb

Some Korean adjectives take the place of the Verb at the end of the sentences. These are also called descriptive verbs. In the Korean language, some adjectives are written in the infinitive form. Following are some examples given below:

Korean Adjectives That Come Before The Noun

These adjectives are used before a noun in the sentences. These are formed by adding the consonant or adjective stem "ㄴ" at the end of the words. Let's look at some examples:

Learning 10+ common Korean adjectives can help you get started with the adjectives.

Honorifics are used for older people or people with higher ranks. These are used to show respect and politeness. The use of honorifics also depends upon someone's age. That is the reason why most Korean people ask about each other age, so they get to know how to address someone concerning their age. Following are some examples of honorifics used in daily life:

While most people are paying more attention to Korean nouns, verbs, and adjectives, they often miss studying the Korean conjunctions, which are also a very important part of the Korean grammar list. Thus the people should also know about them.

Here is a list of the most common coordinating conjunctions in Korean:

Another common type of Korean conjunctions is subordinating conjunctions. If you master these two types of conjunctions, your sentence structure can improve significantly.

Declarative sentences are used to explain something or in response to any question.

Imperative sentences are used to make demands or to give advice.

By now, you must have an ultimate guide to starting learning Korean. All these grammar points are important for you to learn. To stay organized, you can follow the grammar points mentioned in this article to continue studying the Korean language. You can also create a list of your choice with basic Korean grammar rules based on these elements. You can find almost everything about the Korean language on Ling App by Simya Solutions. Ling App is a great place to start learning any language.