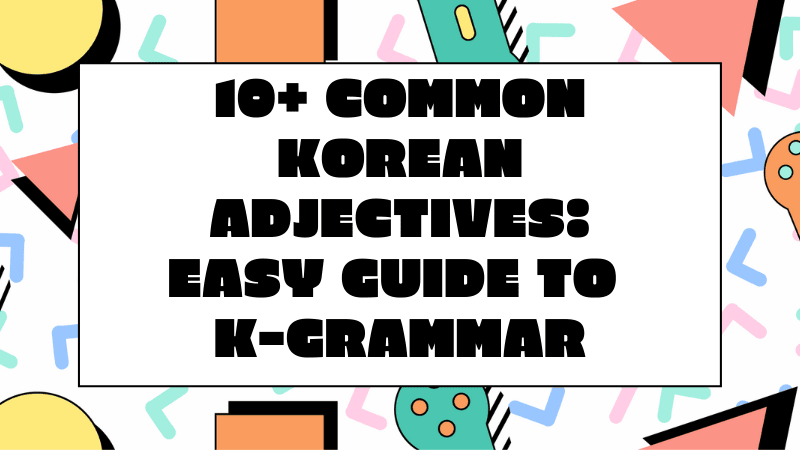 Are you interested in conversing in a much deeper way with a native speaker? The key to connecting better and becoming understood by the locals is learning the correct grammatical construction of utterances. For today’s blog, let us know common Korean adjectives that can add to your vocabulary.

Suppose you want to learn the Korean language. In that case, it is crucial to introduce yourself to the different Korean parts of speech such as verbs, nouns, pronouns, adjectives, adverbs, prepositions, conjunctions, interjection, and determiners of the Korean language. It may seem overwhelming, but it is necessary to learn since these can affect the meaning of a particular statement.

In addition, you need to master and achieve your target language by understanding the meaning and functions of the Hangul or Korean alphabet. But if you are now familiar with hangul, below is a simple overview of how to learn Korean adjectives. Ready to know more about the Korean Language? Let’s get it on!

Remember, when using Korean adjectives in Korean sentences, you should use the infinitive verb form then conjugate it in the appropriate tense.

Korean conjugation is just like the basic verb conjugation. Below are the steps in conjugating Korean adjectives:

After removing 다, you now need to add in the suffix. Adding ending may result in another unit of meaning to your verb stem.

When the verb stem ends in ㅂ, drop it and add 운.

After dropping the 다, then the verb stem ends in ㅂ like 쉽다 — “to be easy.”

You now have 쉬운, the Korean word for “easy.”

When the verb stem ends in ㄹ, drop it and add ㄴ.

After dropping the 다 then the verb stem ends in ㄹ like 길다 — “to belong.”

You now have 긴, which is Korean for “long.”

Korean Adjectives According To Tenses

Same with Korean verbs, Korean adjectives also functions based on the tense. Adjectives in Korean indicate past tense differently. You should need to look at the last vowel in the stem. Below are the example functions for past tense and future tense:

For example: like 맛있다 (delicious) would be 맛있었어요 (was delicious).

For Korean adjectives stems, you add ㄹ 거예요 or 을 거예요 to the verb stem.

For example, 예쁘 (pretty) would be 예쁠 거예요 (will be pretty).

For instance, 늦 (late) would be 늦을 거예요 “will be late.”

YG Entertainment is a big agency.

All Korean artists have pretty and unique voices.

Tzuyu is the tallest member of Twice.

1 night and 2 days is the funniest Korean variety show that I watched.

A mad man is watching over you.

You make me feel special.

Let me know if you have any reactions and reflections about this article by commenting down below. If you also want to learn more, you can check my other blog post about other Korean parts of speech like common Korean verbs, Korean pronouns, and useful Korean prepositions. If you are genuinely passionate about mastering this language, then now is the best time to start learning about the Korean language through the best language learning app, Ling App!

The Ling App by Simya Solutions is a user-friendly and hassle-free language learning application that can help you achieve your target language. This platform provides interactive games with 60+different languages worldwide, such as Korea, Japanese, Georgian, Spanish, Thai, Malay, German, Vietnamese, Cantonese, Serbian, Tagalog, Irish, Khmer, and other minority languages, to help you fast-track your vocabulary learning. Moreover, you can visit and read creative and informative blog posts to understand your target language better.