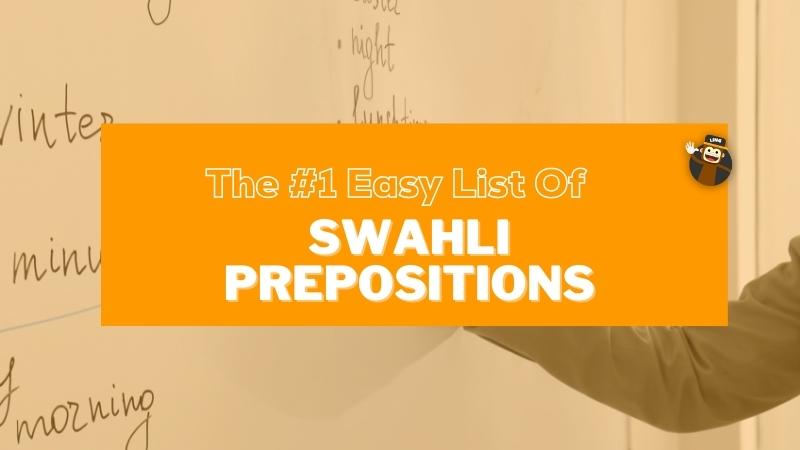 Prepositions play a major role in sentence formation, and it is important to pay attention to them when learning a new language, alongside verbs, adjectives, and nouns. It shows a correlation between two objects and sometimes gives meaning to sentences. In the Swahili language, prepositions or Kihusishi in Swahili is important. That is why we are going through the important Swahili prepositions you must know to be able to formulate correct sentences and become a fluent speaker. With many examples listed here, we can ensure that you’ll understand this topic instantly. Without further ado, let’s get started.

If you are a Swahili language learner and you do not want to go over the grammar point right away, you can also check out how to introduce yourself in case a local asks you, basic greetings, and other necessary Swahili vocabulary.

A Quick Intro To Swahili Grammar

The Swahili grammar is a Bantu language spoken mainly in Eastern Africa. With approximately 200 million speakers, the Swahili language is spoken alongside French and English in Tanzania, Kenya, Congo republic, and other eastern African countries. The Swahili grammar follows the subject-verb-object order and has a rich array of agglutination words, noun classes, and tenses.

Ideally, prepositions are placed before the noun or the pronouns, whether demonstrative or any pronoun. However, when it comes to some prepositions of location, it is added as a suffix when there is a proper noun in the sentence.

What Is A Preposition

We’ve established that prepositions are an essential part of a sentence, but what exactly are they? A preposition is a word or group used before a noun or pronoun to show direction, place, location, or spatial relationship. In layman’s language, a preposition is simply a word that links words together or shows a relationship between both terms.

For example: The cat is under the table

The English preposition ‘under’ shows the relationship between the cat and the table. Another quick example is My phone is in the car. You will realize that the phone and the car are linked together by the preposition ‘in.’

Now that we know what a preposition is and its importance let’s look at the common prepositions you need to know in Swahili.

Let’s look at the common Swahili prepositions essential for the smooth flow of your learning process.

Like I said earlier, we will look at the common examples using these listed prepositions.

Other Swahili Phrases You Should Know

Let’s take a look at other basic Swahili vocabularies to know, especially if you are traveling to any of the Swahili-speaking countries soon.

There Is Still More To Learn

The Ling App is a language learning platform with a gamified experience to make language learning easy and fun. It comes with every feature you need to move from a beginner in the Swahili language to a fluent speaker. You’ll get access to grammar lessons that move from basic words to advanced sentences, interactive quizzes and exercises, flashcards, and even an AI chatbot that helps you develop your conversational skills. With Ling, you rest assured that you will develop reading, listening, writing, and speaking skills in your target language.

What are you waiting for? Download the Ling App today from the Play Store or App Store to get started!