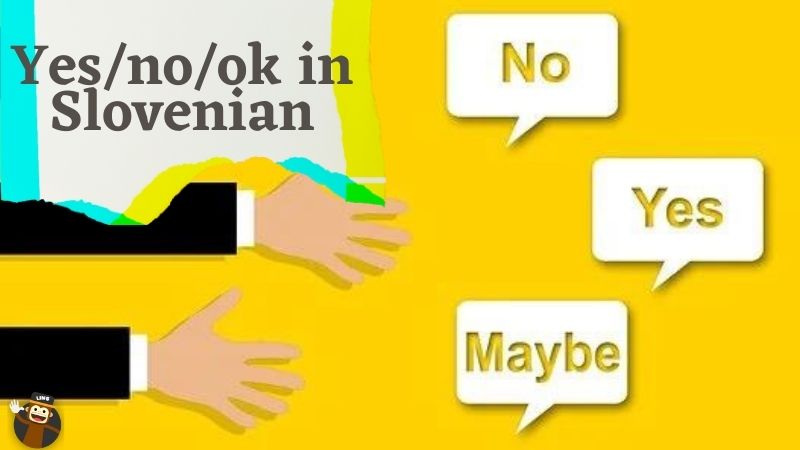 In this post, we will walk you through several ways which you can use to say yes/no/ok in Slovenian. After all, learning these three basic responses can certainly help you navigate your way when communicating with the locals. Fortunately, the translations for these are pretty easy to remember! So without further ado, let's get started.

Every culture has its ways of responding to different questions and statements. Some questions are simply yes/no questions that need answers in yes or no. Let's learn how the locals would say these three expressions in Slovenian.

Já in Slovenian is yes. There are different uses of já mentioned here:

Dà has a somewhat similar purpose as já. However, it is mostly used in the written script of Slovenian. Slovenian people usually write Dà when they want to show confirmation/affirmation.

Saying No In Slovenian

No is a funny word in Slovenian. If you speak English, you must know that the word no is used to negate a sentence or provide a negative answer. Imagine asking someone out, and they reply with a "no," how embarrassing and painful the rejection might sound.

Well, don't be embarrassed while you are in Slovenia and especially Lubljana. In Ljubljana, no is used as a word for affirmation and confirmation and not the other way around, as seen in most languages like English and Spanish, etc.

Note. You should still be slightly careful with using no as a yes. Since most people are learning the English language, they tend to use no. Your sentence structure should be appropriate. You can also find many examples of "no" in the newspapers and magazines.

There are different ways of saying No in Slovenian, and some of them are listed below:

If you are given a weird choice like vadba ali dieta? (exercise or diet?) and you equally hate both; you can say prav nobèn (none whatever).

Ne is yet another way of saying no. You can use it to ask if something is true or when you need the affirmation of another person. Kako grozen dan, kaj-ne? (What an awful day, isn't it?).

What could be a better way of denying a proposal without breaking someone's heart? A great way of saying no in the Slovenian culture is by giving an ambiguous answer. Saying that Slovenian people are extremely straightforward would be the wrong way to put it.

Slovenian people are really friendly, and therefore they prefer to ensure that other people's feelings are taken care of. Saying this nonchalantly is often considered rude in the Slovenian culture, and thus they are often seen using the term "Mogoče" which means maybe.

There are several situations in which you can use "Mogoče." For instance, if your co-workers ask you if you would like to join their protest. You might want to say "no" at that moment, but you need time to think and also don't want to hurt the sentiments of your colleagues, you can say "Mogoče."

Here are some of the easy ways to say okay in Slovenian.

If you want to say okay, you can say prav. Saying prav is a casual and straightforward way of saying okay in Slovenian. Slovenian people use prav a lot in their everyday life. For instance, lahko gremo danes, če prav z večerjo zunaj (We can go today if you are okay with dining outside).

Another great way of saying okay is by saying v redu. Slovenian people often ask si v redu? when they think someone seems a little under the weather. If you are up all night studying for an exam, then someone might ask you, "si v redu? Tvoje oči so videti utrujene." (Are you okay? your eyes look tired).

If you wish to say something like "sure, okay," you could use kar v redu. This translates to pretty good and is usually used in place of okay. You can use this in any casual or slightly formal situation.

Let's now look at some examples using each word.

Learn many different languages with no fuss. Contrary to common belief, you do not have to struggle anymore to find the best website to learn Slovene. If you want to learn Slovenian or other Slavic languages, try using Ling App by Simya Solutions. Ling App provides proper lessons on each Slavic language fun and easy way. It also helps you improve your pronunciation with audio examples of different words, thus enhancing your vocabulary and improving your spoken Slovenian. You can learn both formal and informal ways of talking in each language. You should also check out Ways To Say Cheers In Slovenian and Slovenian Names And Nicknames.