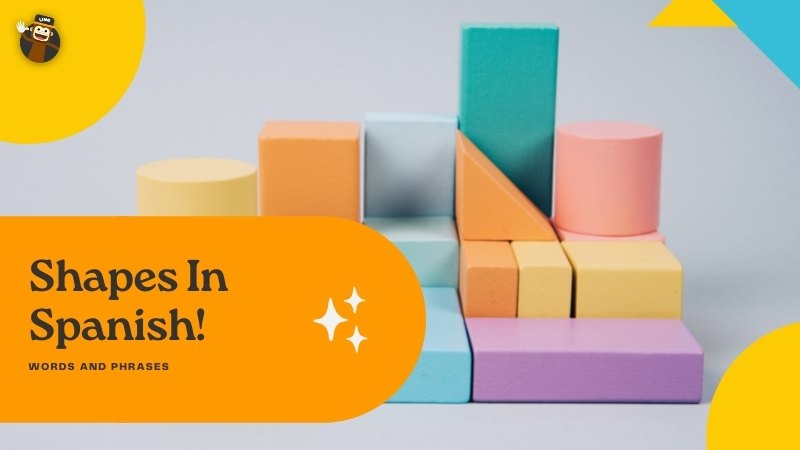 Shapes! What would we do without them! Imagine how strange it would be not to be able to define the form of an object. However, you might have felt that way if you wanted to do it in a foreign language.

Remember when you learned about the shapes of each object by reading a children's book with phrases like 'The roof is a triangle'? This is fundamental vocabulary that every learner should study! While studying a new language, you might need to go to the basics to learn the shapes in Spanish by relating to your surrounding objects.

Improve and broaden your Spanish vocabulary and talk about objects and their shapes fluently.

Let's begin with some basic information about geometric shapes.

The word for 'shapes' in the Spanish language is 'forma.' You might have already noticed that it sounds similar to the English term 'form.' It is because it comes from the Latin 'fōrma/fōrmae,' which means image, figure, configuration, and beautiful.

This word usually expresses the beauty of things. For example, the human body has been seen as a beautiful figure of magnificent proportions for centuries. And so, the word 'forma' generally connotes beauty.

It is even said that the term has origins in the Greek word άμορφος - ámorfos (Amorphous - Eng/Amorfo - Esp), which has the same meaning as the Latin term.

And as you know, we often use the term 'amorphous' to talk about objects that do not have clear shapes.

In mathematics, shapes are the outlines and structure of objects. The shape includes the angles, the surface, and the boundary lines, and it can be two-dimensional or three-dimensional.

If you want a clearer idea of these kinds of shapes, look around. If you are traveling through Spain, for example, focus on the forms of the architecture, and you might be able to name many of these shapes, such as baroque, abstract, or contemporary styles.

For example, the Auditorium of the Canarian Islands. Have you seen it before? It has such an interesting and amazing composition of shapes that you might be able to explore it all and practice your vocabulary by trying to understand what you see.

Let's learn the most common shapes in Spanish regarding remember them easier and sentence examples.

'Triángulo' or triangle is a polygon of three sides, three vertices, and three interior angles. The polygon, in addition, is a geometric figure that can be formed of 3 sides, such as the triangle, or even more to create shapes like the pentagon with five sides.

The triangle shape is the most basic to learn along with the circle, and it is considered one of the most important figures as it is the base of other polygons.

To relate this shape with something popular in Hispanic countries, you can see the gothic architecture of Spain or Latin American churches, which will often have triangle shapes on the roofs, as seen in the image below.

The circle is a two-dimensional geometric figure represented by a closed curved line -circumference- where any point on the line has the same distance from the center. The area of the plane bounded by the circumference is also called a circle.

The circle is another two-dimensional figure that differs from the triangle, as it is a closed curved line or circumference. Any point on the circle's perimeter has the same distance from the center as every other point.

So whenever you want to say the name of any object enclosed by a circumference, you can use the term 'círculo.'

To vividly remember the term 'círculo', I will have you travel to Chile. Let me tell you that in this country you will enjoy the most delicious afternoon coffee time. The tables are filled with so many ingredients, and one of them is the circular-shaped bread, known in Spanish as 'pan amasado' () or 'Hallulla.'

One of the basic flat shapes you will learn first is the square or 'cuadrado.' It is a type of parallelogram with four sides of equal length and opposite sides parallel to each other.

You can easily recognize the term 'cuadrado' by remembering the numbers in Spanish. The number four is called 'cuatro,' and it comes from the Latin 'quattuor' (four), which is linked to the Indo-European root 'kʷetu̯er' (four).

Now, what does 'drado' mean? If we research the etymology of this term, we will find that the word 'cuadrado' comes from the Latin quadratus, which means: "figura geométrica de cuatro lados iguales y cuatro ángulos rectos" ( a geometric figure with four equal sides and four right angles).

Old architecture in Latin American countries has its origin in the Spanish colonization. The buildings are usually square-shaped and have an internal square garden in the middle.

The image is the impressive Casa de Alabado in the historical zone in Quito, Ecuador, with a square form and garden. You can also see the tiles on the floor being 'cuadrados'!

Rectángulo, or rectangle in English, is a quadrilateral figure formed by 4 straight lines called sides. Their opposite sides are parallel, and their 4 angles measure 90º.

The term 'rectangle' means "geometric figure formed by right angles." It comes from the Latin 'rectus' (straight) and the Greek' ankulos' (bent/crooked).

You often find the rectangle in doors, posters, photographs, A4 papers, etc. While in Mexico, visit the ‘Biblioteca de la Universidad Autónoma de México’ (Central Library UNAM). There you will notice that the building is formed by a big rectangle, which has many other shapes in the drawings, and a smaller rectangle on the upper side.

El Óvalo/The Oval is a two-dimensional shape that does not have straight lines or vertices. This shape has a flat face that does not cross at any point.

The main object that often comes to mind when thinking about an oval is the egg. Other oval objects are sports balls, watermelons, balloons, and racing tracks.

That reminds me, if you like skating, you can visit the beautiful oval-shaped (ovalada) skating rink (pista de patinaje) in Bogotá, Colombia, which has been renovated to become a good park environment for families to practice sports.

A rhombus is a flat geometric figure with four equal sides and parallel opposite sides. Therefore, it is a parallelogram.

The term 'rhombus' has Latin roots from the word 'rhombus,' which, in turn, derives from the Greek language.

Many jewels are usually in the shape of a rhombus. Some objects we generally associate with this form are the kite and the toy 'trompo' ( spinning top).

The next time you travel around Latin America, notice the colonial floors with rhombus-shaped tiles and beautiful drawings of diverse shapes. For example, in Barranquilla, you will find many different beautiful tiles.

'Pirámide' (Pyramid) is a three-dimensional (3D) figure created with a polygon as its base and triangles as its other faces.

All the triangles meet at a common vertex on the top. The pyramid parts are the base, the height, the lateral faces, the inclined height, and the vertex.

According to the BBC, the origin of this word comes from the greek 'pyramis,' meaning 'wheat cake.' Those cakes had the shape of what we know today as pyramids.

It is so fascinating to know this fact because the Greeks gave the name of the Pyramids of Egypt, which reminded them of their wheat cakes.

Indeed, when we hear the term 'pyramid,' we often think of the Pyramids of Egypt, but there are impressive pyramids in many parts of the world. In Latin America, you can visit the Mayan pyramids, such as the ‘Pirámides de Tikal’ in Guatemala or the ‘Templo de Kukulkán (El Castillo)’ in México.

The Sphere (esfera) is another 3D geometric body created by a semicircle that rotates around a certain axis. It looks like a circle, but as it is a three-dimensional object, it is not flat and has volume.

The term 'sphere' comes from the Greek word 'σφαῖρα' (sphaîra), meaning 'ball.' Generally, a ball is an object that is delimited by a sphere.

The shapes of Earth, the moon, the sun, and many other planets are described with the term 'spherical' (esférico); although our planet may not be a perfect sphere, it is the shape that most describes it.

For instance, if you travel to Ecuador, specifically to its capital city Quito, you can visit the 'Ciudad Mitad del Mundo' (Middle of the World City).

It has a museum and a monument with the great spheric shape of our Earth on top. A place where, in history, latitude 00°00'00" was measured, and the center of the Earth was defined.

Actually, in this monument, you see so many shapes, from rectangles to squares and more!

Now you can practice on your own by naming each object in your room and describing its shape. If you have also learned the colors in Spanish, you can make longer sentences describing the object's color too!

Ling is here to save the day. A user-friendly and cost-effective language app with more than 60 languages to learn, including Spanish.

If you have been looking for an easy and fun app that you can use any time and everywhere, and on top of that, it teaches you essential and survival vocabulary words, Ling is the answer.

Trying out its lessons will help you learn grammar, vocabulary, listening, reading, and everything you must know before traveling to a Spanish-speaking country without getting bored. Its gamified concept is ideal for those who usually have trouble studying languages with books. Learning languages can also be fascinating and entertaining for you if you use the right resources.

So if you are ready to increase your Spanish skills and start talking with the locals, try out the first lessons on the Ling App for free!

Your goal of achieving becoming a pro in the Spanish language is just a click away. Start learning Spanish with Ling Now!