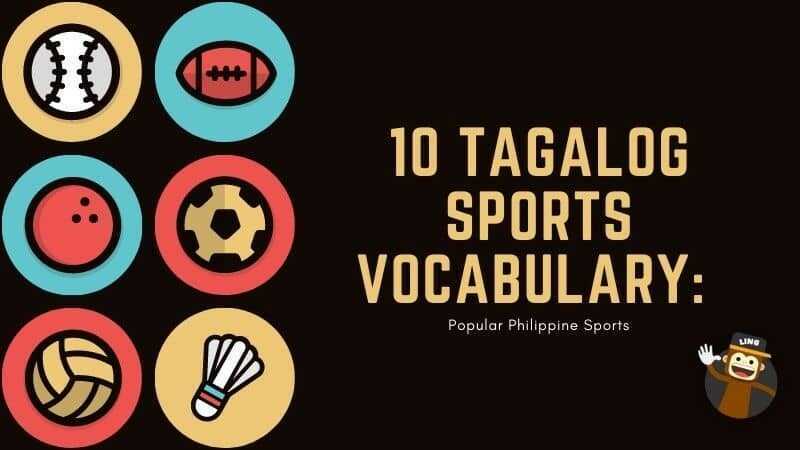 Are you interested to know some of the most popular Tagalog sports? In today's post, we will walk you through the sports loved by the locals and mention some of the biggest names in each of those fields. In case you didn't know, the Philippines is also home to some of the best athletes in the world, which is why many of the locals are interested in this topic. So if you are looking for a good topic for a conversation with the locals, be sure to mention about Philippines' paligsahan or laro. Are you ready? Let's get started!

Various Filipino athletes participated and have been included in the Southeast Asian Games or SEA games in the past years. This shows that many Filipinos are known for being good in athletics despite living in a tropical country and being in a third-world country.

Nowadays, Filipino athletes are inspired by their seniors. That's why they still try their best even if they keep on losing in several sports events. After several losses, the dream to become a winner reflects the Filipino's optimistic and fun characteristics. To sum it up, sports in the Philippines is an acknowledged and appreciated culture, both young and adults. Want to know the ten popular Tagalog sports and famous Filipino athletes who played those sports? Let's get started!

Arnis is known as the national martial art sport in the Philippines. Aside from the translated English word, it is also called Kali and Eskrima. This is prevalent in the Philippines as a defensive sport because of other provinces, which are surrounded by several forests and wild animals. Moreover, the Philippines is recognized for the usage of bladed weapons. That's why this culture inspires arnis.

Boxing is one of the popular sports in the Philippines because there are various Filipino world champions such as Nonito Donaire and Manny 'Pacman' Pacquiao that became the pride of the country. At a young age, some Filipinos are playing boxing because these two athletes inspire them.

Filipinos are known for being devoted fans of basketball. Several young adults played 'paliga' or basketball leagues from different barangays in some provinces. Aside from that, watching the Philippine Basketball Association or PBA and  University Athletic Association of the Philippines or UAAP  on television and even in live studios is one of the fun habits of Filipino fans.

Moreover, the Philippines have the International Basketball Federation, the Gilas Pilipinas. They won several awards in the Southeast Asian Games (SEA Games) and other international sports events.

The higher class usually plays this sport in the Philippines. They tend to play golf as their relaxing time and hobby. Some golf courses are found in big resorts and hotels, like in Tagaytay Highlands, which is known for being Asia's most exciting golf course because of the cold breeze and pine trees.

There are various Filipinos who compete in playing golf inside and outside the country, but as of now, the country is still waiting for a person who can bring home the bacon.

Like basketball, volleyball is also one of the most exciting sports in the Philippines. For instance, the UAAP women's volleyball ex-player like Alyssa Valdez is one of the famous athletes that inspired young Filipinos to pursue their dream of becoming like her. This sport is very common to young Filipino women.

Billiards are often played by Filipino adults, particularly by men with the presence of beer. This sport is usually associated with the great Filipino pool player Efren 'Bata' Reyes, a.k.a The Magician, because of his magic tricks to win against his opponents.

Like golf, bowling is also played by the higher class in the Philippines because the bowling center in the country is quite expensive. One of the well-known Filipino bowlers is  Rafael 'Paeng' Nepomuceno. He has won the World Cup in bowling and the Hall of Famer four times in three decades.

The most famous national Filipino football league is the Azkals.

The Sipa or Sepak Takraw is similar to volleyball, but the players only use their feet to kick the ball. Also, they use a small ball made from rattan instead of a rubber ball. Also, this sport is one of the traditional games in the country and became the national sport in 2009.

Famous Filipino players of Sepak Takraw lived in Palawan Province. Jason Huerta and Mark Jason Gonzales are some players who participated in the SEA Games 2019.

Taekwondo as a sport is commonly played by kids in the higher class of society. Various private associations and schools offer this sport every summer. But now, the Philippine Taekwondo Association or PTA offers free courses and webinars for those who want to be taekwondo practitioners.

One of the renowned Filipino taekwondo practitioners is Roberto "Kitoy" Cruz, who played in the international competition in the Philippines.

Looking for the best language learning application in learning the most common words in the Tagalog language? Ling App is here to help you achieve language acquisition and proficiency. You can read and learn other Tagalog topics such as Tagalog Alphabet, Learning Tagalog Fast, and Common Tagalog Animal Names to master other Tagalog vocabulary today.

The Ling App by Simya Solutions is a user-friendly language learning application suitable for beginners, intermediate and advanced levels of a target language. Users can choose other languages because Ling App offers 60+ foreign languages. Moreover, learning the target language is made easy because the app is equipped with engaging language activities like interactive quizzes and appealing flashcards. The embedded A.I. chatbot is also an exciting feature of the Ling app because language learners can ask queries about the meaning, synonyms, translations, and other information related to their target language.

If you are all set to learn your target language, download Ling App now and start a fun way of learning!