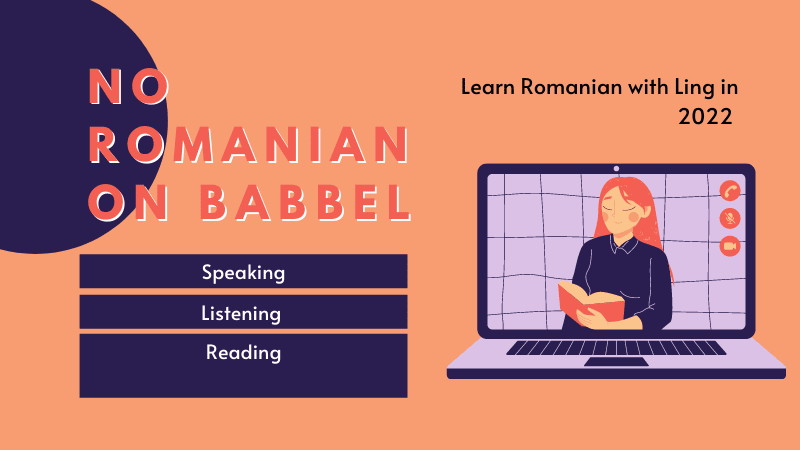 Calling all language learners: Today, we're going to investigate why there's No Romanian On Babbel. If you've been following this blog, you'll know that Babbel has unfortunately eschewed some of the lesser spoken languages favoring behemoths like Spanish, Italian, and French. The reasons for this are clear. There is more money to be made when you have more speakers. But we, at Ling, believe learning Romanian is just as valid as learning any other language.

Why It's Important To Protect Languages From Going Extinct

It is estimated that 400 languages have gone extinct over the past century. That basically equates to four a year. Of the 6500 languages remaining, scientists expect half to disappear by the turn of the next century.

Historically, the death of a language has been a brutal affair. Take the Native American languages over the last 200 years. Although things improved for the native Americans in the 20th century, or at least they weren't being hunted, they were often sent to schools where it was forbidden to speak their native tongue.

In the 21st century, languages usually aren't lost by military destruction instead by globalization. English has become the lingua franca. Given a choice between teaching their children the language of their native village, parents in Africa and Asia choose English to secure their children's financial future. This is particularly common in migrant populations where assimilation is seen as tantamount.

Unesco estimates that there are 576 endangered languages in the world as things stand.

Some people view language loss as a fact of life, survival of the fittest, but this Darwinian view is wrong. We don't let a species die out because its habitat has come under threat. Or at least we don't now. It is even more critical when you consider how much of a language makes us human. Language is not just a biological phenomenon; it is the oral history of an entire race of people. And all races are created equal. Imagine if it had been English that had lost the roulette game and was set to become extinct. Think of the cultural artifacts that would be lost.

But it's not just the cultural artifacts. Each culture and its language is a repository of knowledge about topics as diverse as pharmacology, geography and navigation. For example, you would quickly realize the use of one of the native American languages if you were lost in the American wilderness. Their knowledge base of novel plants is extraordinary and would save your life.

No Romanian On Babbel: The Alternatives

Ling by Simya Solutions is on a mission to bring you lesser spoken languages that aren't on Babbel, Duolingo or other language learning apps. We care about those overlooked languages because we believe preserving them is important.

We have everything you've come to expect from an app, including gamification elements, a leaderboard, mini-games, listening and speaking practice with our A.I.

My philosophy is to build Ling into my daily routine. The lessons are designed to be consumed in 15-minute bite-sized chunks. I do one over breakfast and then another over lunch, and I find it sets my language learning antenna up for the rest of the day for other language practice opportunities.

We also have our blog that is updated 20+ times a week. Unfortunately, we don't have a dedicated Romanian blog on the site, but there are blogs for Slavic languages like Serbian and Latvian. So even though you may not be learning Serbian, it is good to know your language goals and what a list of suitable vocabulary looks like for your new language level.

We hope you enjoyed reading this blog. In this day and age, knowing your native language is not enough. So come over and speak Romanian today.

More From The Romanian Blog