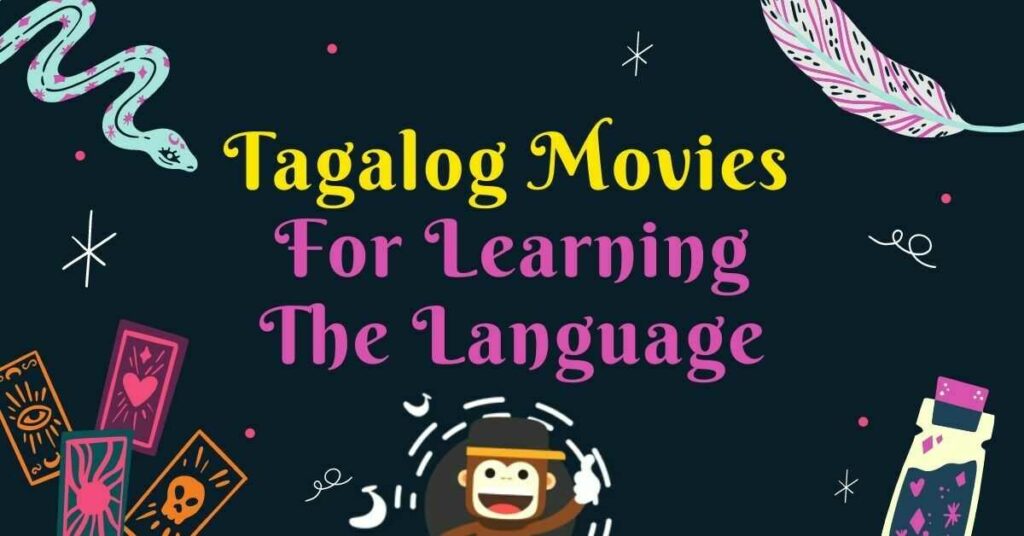 Whenever we think about learning the Tagalog language, what usually comes to mind is dreadfully long and expensive language courses. However, contrary to common belief, you can also use Tagalog movies as a supplementary resource. This can be one of the best ways to explore and immerse yourself in how the language is used in real life. Also, this can be an excellent way to hit two birds with one stone since you can relax and enjoy while you are gaining more information about the slang and special cases of the language.

Are you a fan of katatakutan (horror in the English language), romantika (romantic films), or katatawanan (comedy)? No matter what floats your boat, we bet that there is at least one Tagalog film out there that will suit your taste. You see, the movies of the Philippines are best known in the industry as one of those that greatly reflect the culture and ideals of every Filipino. Despite major cinemas being dominated by Western movies, Filipino films and indie movies are guaranteed to give you a chance to know specific things about the country, its language, and its people.

As of writing, the top 5 highest-grossing Filipino films of all time are the following:

As you probably can notice from the titles of the shows above, most of these make use of English or Taglish. Such a naming convention already gives you much about what to expect: Taglish is spoken throughout the films! With this being said, you as an English speaker can at least get an idea of the movie’s topic just by listening to the linguistic exchanges and using the subtitles.

On the flip side, if you are someone who is not interested in mainstream movies and would like to get a taste of what the Philippines really is all about… we highly recommend that you check out some of the top indie movies. You may consider this because these are independently created, and their goal is mainly to give a new perspective to stories that are not usually seen in mainstream media. Some of the top topics featured here are based on real-life experiences of Filipinos about poverty, death, provincial life, and the lives of the people behind the scenes.

Below are some of the award-winning, internationally recognized Filipino movies created by independent filmmakers:

But before you watch these Pinoy films, I bet you are wondering, how exactly can you learn Tagalog language using these alone, right? To answer your question and understand how it works, continue reading below.

Learning a language must always be on a holistic approach which means that you shouldn’t just be stuck memorizing but also understanding through immersion. Aside from reading books and listening to podcasts, learning through movies is significantly effective in enhancing the language learning process and the student’s motivation.

However, don’t just jump into a Tagalog film and watch tons with the expectation to become fluent right away! In order to fully learn and understand using the Tagalog movies, you need to take on a systematic approach. Below are the exact steps which have worked for our learners:

Step 1: Choose A Genre And A Movie Title You Want To Watch

There is nothing more demotivating than trying to get through a movie you are not interested in. Luckily, Tagalog movies are pretty versatile, meaning you can always get a story from a genre you are happiest about. However, if you are a beginner, we recommend that you stay away from comedy films since most comedies in mainstream Tagalog films can be offensive, especially if not spoken correctly.

As a rule of thumb, it is wise if you research the film first and read the summary so that you will not get lost about what the title is all about. More often than not, you can find that many Filipino films may have deceiving or philosophical titles that you may not easily understand without any guidance.

Thinking that an hour-long movie in a language you still do not know can be overwhelming? Instead of going all out and watching the whole film in one sitting, you must consider chunking it into smaller pieces so that you can focus on one scene at a time. Then, using your notes, try to write out all the information you have learned and the expressions used by the characters. Also, you may download the entire script (if it is available online) so that you can review the script and take notes on what every single line meant based on the context.

As you review your notes and write down the contextual meaning of each line in the story, you can also replay the scenes and use English audio to check if you really understood the meaning. However, do remember that you should not move to the next scene if you do not understand the language exchange between the characters completely.

If the audio is not available, you may also find the film’s subtitles or manually download the srt file. You may skip this step, but this is recommended, especially if you are really new to the language, and your goal for watching is to train your ear regarding the tone and sound of the Tagalog language.

Want to get to know some of the best shows you can tune in to this 2021 to learn the Filipino culture and the Tagalog language? Check out our three most recommended movies that will feature different aspects of what makes a Filipino a “real” Filipino.

This Tagalog indie film shows the lives of the Filipinos during the Philippine-American War, which means that the movie will feature languages such as Tagalog, English, and even Spanish. The main character here is General Luna, best known as one of the Philippines’ Best Army General and Chief of Staff of the Armed Forces of the Philippines. While the whole story may be a bit twisted, it still reflects much about the Pinoy identity and how the locals use Tagalog.

This Tagalog indie movie features the life of the 118-year old grandmother known as Lola Igna and has won the top prize for the Pista ng Pelikulang Pilipino (Festival of Filipino Movies). The whole film uses the Tagalog language, but it also adds a few lines from other local languages from the Philippines and some slang, making it a great film to learn the language.

This mainstream-directed film follows the life of a Filipino transgender woman who is dreaming of becoming a celebrity. As part of her dying wish, she asked the closest people around her to be dressed as a different celebrity on every single night of her wake. This is an excellent film to watch as it uses the Filipino language and some Bekimon, which means that it is perfect for those looking to understand the complexities of the language.

As we reach this part of the post, we hope that you are able to discover a whole new way to learn the language of the Philippines like a real pro. So, if you enjoyed this post, please check out our previous Tagalog posts, like the slang, history, and its difference to Spanish. Also, don’t forget to practice learning the language using the Ling App by Simya Solutions.

The Ling App is a language learning platform guaranteed to move your through from total beginners to a language pro in no time! Just by using the platform for at least 10 minutes per day, you can get to master Tagalog and about 60+ other foreign languages, making it one of the best free applications out there. So download it today and explore your target language with the Ling App.