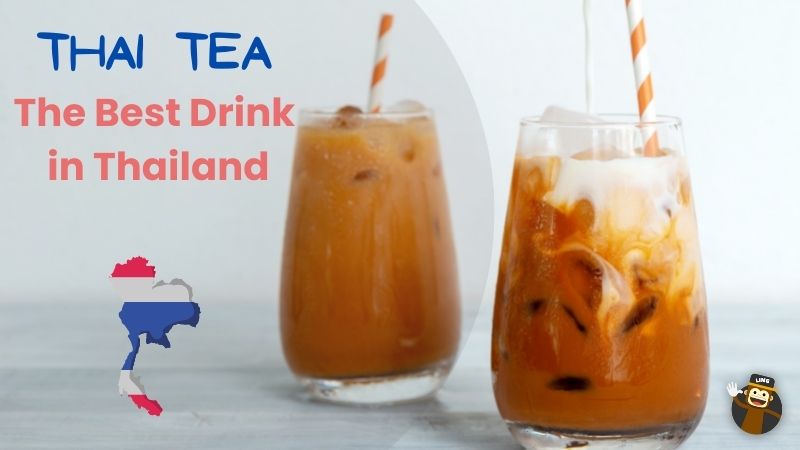 There is nothing quite like Thai tea. It's so different from any other tea that you may not even recognize it as tea. As opposed to the usual watery rendition we typically drink, Thai tea is thick, colorful, and can be served hot or cold. It's also very sweet.

In Thailand, the drink is served everywhere, from drink stalls on the street to 7-11 or fancy Thai restaurants. It's almost always served over ice and is a trendy drink here in Thailand. Thai tea has since been replicated worldwide, becoming a specialty drink.

Elsewhere in the world, the drink may be known as Thai iced tea. But in Thailand, it's known as ชาไทย (cha Thai) or ชาไทยเย็น (cha Thai yen), which means cold Thai tea, or you can ask for ชานมไทยเย็น (cha nom Thai yen) which translates to iced Thai milk tea.

The History Of Thai Tea

Originating in Thailand, it's theorized that one of the kings in the 19th century, King Rama IV or King Rama V, wanted a Thai twist on traditional English tea.

So they mixed in milk and sugar with tea and poured it over ice to differentiate. Plus, it's hot in Thailand, so drinking a nice cold tea would have been (and still is) a refreshing way to drink tea.

Why Is Thai Tea Orange?

Thai tea is actually made with black tea, which makes you wonder, how does it get its orange color?

This can be traced back to the time when the kitchen staff of the royals or influential people would reuse the tea leaves, which of course, had lost nearly all of their flavor.

To compensate for this lack of taste, they added spices. The tamarind, turmeric, and star anise seed give it its bright color.

Sometimes you may see brownish tea, but this isn't traditional Thai iced tea, which should always be orange. Be mindful that if the tea is a very bright color, almost neon, chances are food coloring has been used, which may not be to your liking.

What's In Thai Tea? What Are The Ingredients?

If you wanted to make Thai iced tea from scratch, these are the ingredients you would need:

Oh, Thai tea tastes absolutely delicious! Although you have to like sweet drinks.

It's creamy and thick, cool and refreshing. The taste of tea packs a punch, so you know you're drinking tea, but the condensed milk gives it a powerfully sweet flavor.

Within Thailand, it's possible to ask for Thai tea with less sugar. But, it's impossible to get it with no sugar because otherwise, it wouldn't be the drink it is!

Here's how to ask in Thai to make the tea less sweet:

Are There Any Health Benefits To Drinking Thai Tea?

There would be (and probably still are) health benefits. However, the high sugar content may negate them. Black tea on its own can prevent cardiovascular disease and can combat weight gain.

Turmeric can prevent inflammation, and tamarind is a powerful antioxidant.

The calorie intake from one glass of Thai tea is around 200 calories but can go much higher than 300 calories due to the condensed milk and sugar content.

Here's an authentic Thai tea recipe and how to make your own tea from scratch:

You can fool around with the amount of tea, sugar, and spice to get your desired personal taste. There isn't a measured amount of ingredients for Thai tea. Like every person and every shop in Thailand makes it their own way.

Also, you can replace sweetened condensed milk with alternatives such as whole, coconut, or almond milk.

How to make a Thai tea recipe using a Thai iced tea mix:

Most people prefer to use a Thai tea mix because it's way easier and takes far less time to make!

While you can buy dozens of Thai tea mixes, the one in the above photo is the best! It's the 'original' Thai tea mix that everyone uses in Thailand.

If you use this product to make Thai tea, you're guaranteed to get the best-tasting Thai iced tea.

How To Order Thai Tea In Thailand

Always remember to add the Thai pleasantries of คะ (ka) for women and ครับ (krub) for men at the end of each sentence. It's polite and expected in Thai culture.

Here are a few different ways to ask for your tea when you're in Thailand:

While you can make Thai iced tea at home, nothing compares to the authentic Thai tea recipe you will get in Thailand. When you visit, this is a must-try drink. It's kind of addictive because it does have caffeine in it.

Unfortunately, there is no such thing as a non-caffeinated version because no such tea exists.

We hope you enjoyed learning about Thai tea and picked up some phrases you can use in Thailand. There is so much more Thai to learn! Head over to Ling App, which boasts of being the first (and best) language app for learning Thai.

Learning Thai with Ling is not only fun, but we help you stay accountable for your learning. There are games, conversations, listening, reading, and writing skills to practice within our app.

Our goal is to make you proficient in any of the 60-plus languages we offer.