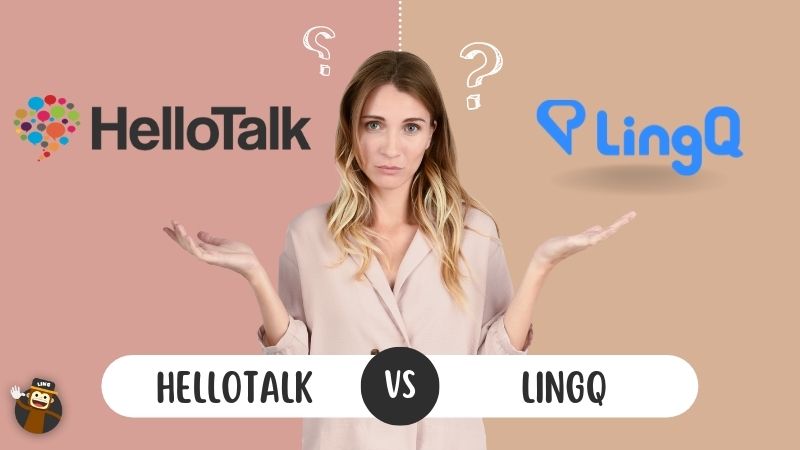 Let's face it. The language learning app market is densely saturated. You have your hard-earned cash to spend but making an informed decision is like trekking through the jungle without a compass. What we want to do today is give you a little assistance, and we're going to do that by comparing two relatively well-known apps. Read on to see our HelloTalk vs. LingQ review.

HelloTalk has an amazing array of languages. It's so high it's difficult to pin down the exact number. Our guess is around 160. Because the app is user-driven and runs more like a social media platform, it has languages from anyone in any country who has access to the internet. Needless to say, languages like English and Spanish have more users because of the population demographics. However, languages that have become en vogue in recent years, such as Korean, also have a high degree of representation.

About HelloTalk (HelloTalk vs. LingQ)

HelloTalk is a curious mix of language learning app and social media platform. You have many options to navigate on the home screen, such as 'chat,' 'search learners,' and 'moments,' which is more of a Facebook-style news feed with pictures.

HelloTalk also has recently introduced an app function similar to traditional language learning apps where you work through lessons and courses; however, it remains relatively small scale. The best element of this is HelloTalk vocabulary, where you can practice using flashcards(however, there is only 1 lesson per day on the free version).

HelloTalk is all about participation. Speakers give translations, pronunciation tips, etc., to other users, and the number of times you contributed shows in your profile.

About LingQ (HelloTalk vs. LingQ)

The best way to judge an app is often by its USP- unique selling point. This USP is often in the title of the app itself, which is the concept of LingQ.

LingQ is a reading platform, and when you do some reading and come across a word you don't understand, you 'LingQ' it, and it is presented later in the form of a flashcard.

LingQ has an unlimited amount of online articles you can draw from, so unlike other apps, it is very expansive and can be used by highly advanced learners.

HelloTalk premium is $6.99 a month. However, the free version is great.

Which Is Better? HelloTalk Or LingQ?

In all honesty, it feels slightly disingenuous comparing these 2 apps. It's like comparing apples and oranges.

Although HelloTalk has started to incorporate elements of traditional language learning apps popularized by Duolingo, it still remains a user-driven social media platform.

Although LingQ has elements of a community in how materials are shared, it is nothing like HelloTalk. (That might change as the market becomes increasingly homogenized.)

So to say which is better is slightly missing the point because I would recommend using both in tandem. HelloTalk is so cheap(and its free version so good) that you can easily afford a subscription to HelloTalk as well as another app.

One final thing to say is that LingQ's free version is terrible, so don't rely on that.

How About Learning With Ling?

We reached a definitive answer today. A hybrid between the two apps. Although I'm a fan of LingQ as a traditional language learning app, I think there are better options on the market, such as LingQ.

Ling is great for beginner and intermediate learners to gain a foothold in the language and perhaps not quite as good as LingQ at enticing advanced learners. However, comparing Ling to LingQ, we can see its undeniable advantages such as it costs 25% less per month and offers far more languages. I also find that Ling's use of multimedia elements is better and the interactive lessons are far superior.

If you enjoyed this blog, why not check out some others. We have blogs about the best language learning apps such as as well as reviews by our writers of other apps such as iTalki Review and Busuu Vs. Duolingo.

One final call to native speakers of English. Pick a new language and go for it (either with Ling language courses) or one of the numerous other language apps. One thing I realized as a solely native speaker was that only having your native language in the 21st century just isn't enough. We live in the most interconnected time in history and if we all become language learners whether, on language exchange apps like HelloTalk or a traditional language app like LingQ, we can hit those target language goals and improve our overall language skills.