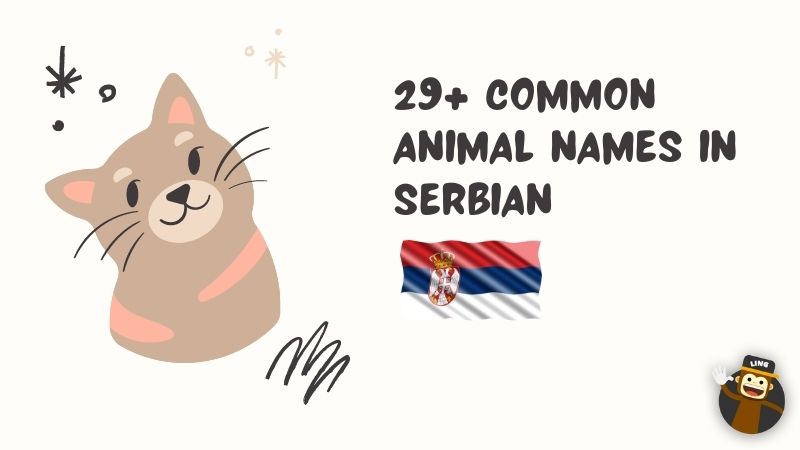 Are you wondering what the common animal names in Serbian are? If so, you have arrived in the right place. If you are an animal lover and are learning Serbian, you can't miss knowing how to say the common animals.
Since there are many species and animal names, this article will cover the ones that are most likely to be used during a conversation.

The first thing to learn is how to say the most common animals in Serbian. If you speak with Serbian people, you might need to know how to say cat, dog, fish, or horse.

Here are some useful animal names:

When talking about animal names in the Serbian language, it could be beneficial also to know some related words in the associated topic, such as mammals, insects, forests, wildlife, etc.

Here is how you say them:

Serbian dog names are very original, and some of them are even famous through popular TV shows. For example, Sima is a trendy dog name in Serbia. As a result, dogs' names can be a subject of an exciting conversation.

Here are some of the most popular male Serbian dog names:

If you are looking for female dogs' names, they are also very original and catchy. It is not uncommon to call a pet by an Eastern Europe name.
Here are some ideas:

Serbia is the home of unique animal species typical of the country. But it is the home of also many mammal species, over 2000 butterfly types, and over 380 bird species. But some of the animals you can find are native to Serbia. Those are:

In Serbia, it is possible to find a population of brown bears that can be seen at the Tara National Park. At the same time, wild boars are visible running around the country and are known for destroying things and wandering in some of the cities at times.

Grey wolves are ordinary in Europe, but many wander through various forests in Serbia, especially in the southwest and eastern part of the country. The red deer is a native Serbian animal, and it is one of the largest species living on the planet.

Fortunately, their numbers have been increasing through the years, and it is very easy to see them if you travel to Serbia.

The Eurasian Lynx is an attractive feline living in the mountains and characteristics of the Serbian wildlife. Therefore, it is easy to find them in central and Eastern Europe. Similarly, the red fox is a common animal in Europe due to its remarkable ability to adapt to living in different scenarios.

It is common to see a red fox near Belgrade or in the forests outside the cities. In addition, butterflies are widespread to see throughout the country. You will see many variations of butterflies with many bright and flashy colors. While there are many butterflies already, their number is only planned to increase further.

Would you like to learn more about the Serbian Language? Then you can read also Thank You In Serbian. and Clothing In Serbian.

Learn More With The Ling App!

There are over 60+ languages available through Ling to learn at your own pace and where you want. In fact, the app is available for desktop and mobile devices likewise. It is filled with grammar tips, high-quality lessons, and fun quizzes.

It is fun to learn whether you have only 5 minutes a day or maybe just an hour a week; this app can help you reach your goals.

You can find Ling in the App Store, Google Play, and a desktop version! The app has lessons for beginners and advanced language learners. So, you don't have to worry about your language level when using Ling.

This platform redefines language learning by making learning languages more accessible and fun. So don't keep waiting if you want to learn Serbian. Make sure to download and check out the Ling App today!