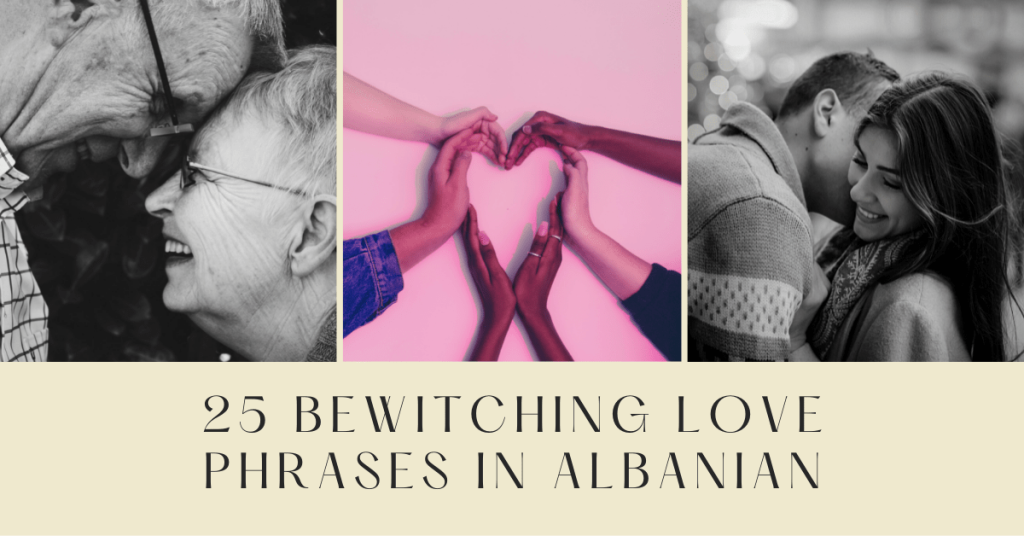 I love you- Unë të dua. Even if you’ve never heard any love phrases in Albanian before, you still get the sense from how they sound that they mean something important. Today we’re going to take you on a romantic exploration of one of the most beautiful languages in Europe.

There is a different version of I love you: Të dashuroj, a longer version of the first. It has three translations: to need, to want, and to love.

So when an Albanian says Unë të dua, they really mean it!

Culture And Love In Albania

The most powerful Albanian word is dua, but what does this translate to culturally?

When it comes to dating and love, every country is different, and there isn’t a one-size-fits-all generalization you can make about a nation.

That being said, Albania is definitely a more conservative culture. For example, there is a lower divorce rate compared to Western Europe, and women dress a lot more conservatively(as they do in other majority Muslim countries).

Albanian weddings are crazy in all the right kinds of ways. Weddings are sometimes week-long affairs that involve everyone in the community, and there are many elaborate rituals between the bride and groom’s families.

It is common, particularly in rural settings, to fire guns in the air when the bride arrives at the groom’s house. It is a tradition that goes back years and has its roots in Albania’s warrior past. However, perhaps the people who started it couldn’t imagine modern people with their automatic rifles.

As discussed elsewhere in the Albanian blog, the number of Albanians living abroad is three times higher than that of people who live in Albania. Nowadays, in the likes of America, you will see combinations of old Albanian traditions and the modern elements of a wedding. For example, the bride and her bridesmaids might start the ceremony wearing veshje e katunit, a traditional Albanian outfit, and then, later on, change into modern wedding gowns.

Veshje e katunit is combined with a jelek, a vest made of 24-karat gold thread and adorned with crystals. If there’s one thing about Albanians, it’s that they don’t do things by half measures. That being said, what you spend on the dress and the reception can often be recouped in the gifts you receive from family, friends, and community members.

As a country with such a complicated and sad history, there are some excellent examples of romance and love poetry. The most famous is Lahuta e Malcís or the highland lute. It was first published in 1937 by Gjergj Fishta.

It isn’t a love poem about a girl rather a love letter to the Albanian nation itself. From its length, 17000 verses, we can presume Gjergj Fishta really loved Albania.

The translated poem opens with:

The Bandits, Help me God as you once helped me, Five hundred years are now behind us, Since Albania, the fair was taken.

The Look Of Love, Ling, And The Albanian Language

The engineers and teachers at Ling understand that you cannot just focus on basic vocabulary to learn Albanian phrases. You need to drill deeper. If you learn Albanian with us, three separate units deal with love and romance, not forgetting the chatbot function, which allows you to practice free talk with our AI algorithm.

Luckily Albanian has the same alphabet as the most common European languages, so you don’t need to practice your writing, but when it comes to learning Lao, for example, we have writing practice in the app, which allows you to get used to the new script.

The world is opening back up. So don’t be caught short when you meet the nicest Albanian girl in Tirana on the dancefloor of the city’s coolest nightclub. We have blogs on basic Albanian phrases like please ju lutem, and How cool O sa Mirë, as well as verb forms like to come down të zbresë

Unë e dua Ling. We hope that you will come over, sign up, and join our Albanian community today. It is the perfect antidote for loneliness.

If you have any questions, please leave a comment, and we’ll get back to you.