How To Express Greetings In Malay?

The Malaysian language is the mother tongue of the Malaysian people. It is also known as Bahasa Malaysia and Bahasa Melayu, or BM for short, as to how the Malaysians call it. If you are not born Malay, don't be afraid to learn it because Bahasa Melayu is a very easy language to learn!

Before we start learning about Malay greetings, here's one helpful tip - though Bahasa Malaysia may seem identical to the mother tongue of Indonesians, both languages have significant differences, especially in their pronunciations.

So, you can start off learning Bahasa Melayu by recognizing and understanding how to pronounce 'selamat pagi' and 'apa khabar' like a true Malaysian!

Common Malay Greetings And How To Pronounce It

If you are keen on learning and acquiring Bahasa, the first thing you need to understand is the common phrases of the language. What are the basic Malay phrases and expressions that the native Malay speakers often use upon greeting each other?

Here are some of the most typical Malay phrases that a Malaysian uses when greeting someone:

Now, we know the most common Malay phrases for greeting. However, when is the most suitable time to verbalize expressions like apa khabar and hai? Let's see what do these Malay phrases mean, how to pronounce, and when to express them.

Well, these words are quite self-explanatory since it's universally used. In Malaysia, the locals would articulate 'Hello' and 'Hai' whenever they greet people. The way it is articulated is exactly how it is pronounced in English.

Similar to other countries, those in Malaysia simply greet each other by saying Hai and Hello. These basic phrases fit both formal and informal occasions. You can casually greet an individual by saying Hai and the same word can even be used as a formal means of greeting. So, if you're sending an email to a colleague in Malaysia, you can simply start by saying 'Hai'!

For your information, the culture in Malaysia normalizes the act of handshaking whenever greeting people, especially if you and your interlocutor are of the same gender. The act of handshaking is also locally known as ‘salam’. Typically, when shaking hands, a local would ask apa khabar (how are you) to greet someone, right after saying ‘Hai’. 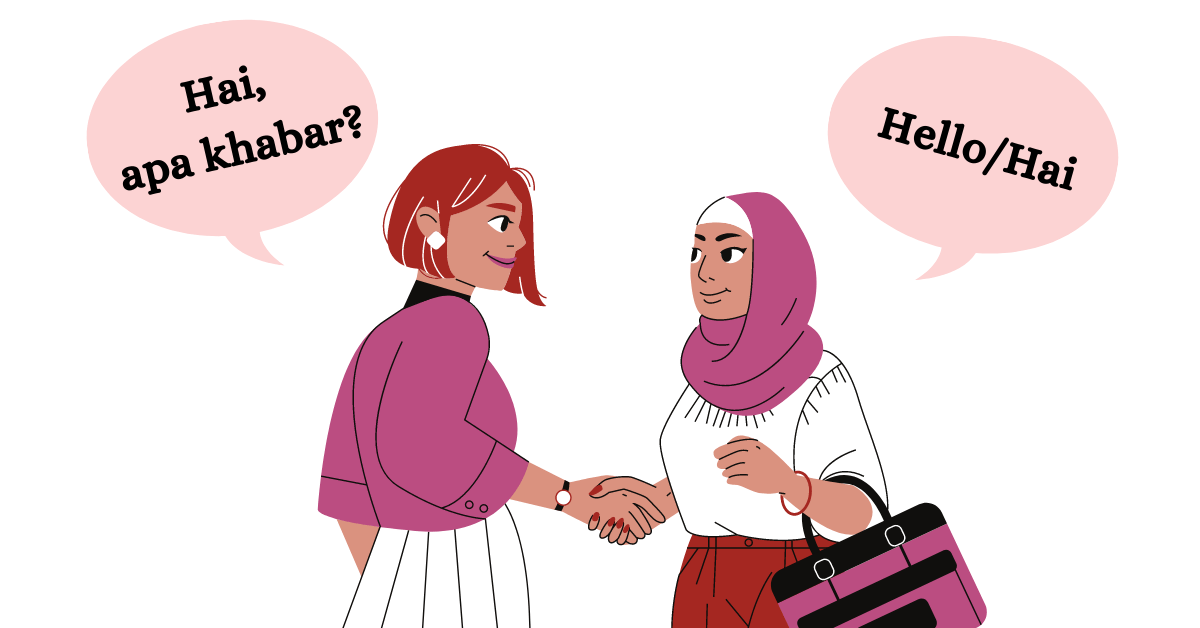 In a literal sense, the word apa means what. It is a question word in the Malaysian language context. Khabar, alternatively, refers to news in Bahasa Malaysia. When put together, apa khabar means how are you.

As the phonetic transcription above is based on how Malaysians commonly articulate it, it’s best for you to remember that it’s a rather colloquial, casual way of articulating the phrase. It is how Malaysians say apa khabar in almost every context of their lives, even on professional occasions.

Then again, you might want to be careful when it involves a formal, high-status ceremony. On official occasions with very strict ceremonial or royal protocols, apa khabar will be articulated in its standard, formal way.

So, in such context, it would be best if you pronounce it as /ɑpɑ kɑbɑr/, instead of /ɑpə kɑbɑr/. The figure below shows how the vocal sound ‘a’ in apa changes when the setting is strictly formal:-

Congratulations! Now you know the secret on how to pronounce apa khabar in Malay the right way (just like a local from Malaysia!)

How Do I Reply?

Now, as you have understood how to utter how are you in the Malaysian language, what should you reply in return if someone asks that question to you? In Bahasa, if someone asked apa khabar, you should answer “khabar baik (I'm fine)” in return.

Khabar means news and baik means good. Shortly, that phrase means good news. Overall, it implies that you’re good/ fine. Sometimes, Malaysians love to drop the khabar in front and only state baik as an answer, especially in a casual context. How To Say Good Morning In Malay?

Other than apa khabar and khabar baik, if you’re a tourist or a non-native of Malaysia, you may need to find out how to pronounce good morning in Bahasa, especially if you’re working with the locals for a long term. Being able to say some basic expressions may please them and that will gain a fantastic networking experience with the native Malay speakers. So, let’s look at the phonetic transcriptions below and learn how to wish good morning, good afternoon, and a good night in Bahasa.

In Malaysia, this is mostly how these expressions are used:

An important tip if you’re new to Bahasa – we don’t use selamat malam to greet! When do you say it then? Well, selamat malam is usually used when you want to bid someone a good night before going to bed. So, in the Malaysian temporal context, you can opt for selamat petang if you need to greet an audience (especially in a professional setting like a conference or meeting) and only say selamat malam once it’s time to call it a day. You can also utter selamat tinggal to bid your goodbye. The locals, however, commonly verbalize the word babai to signify parting (pronounced exactly like bye-bye). If you and the other person will meet again the next day, you can say jumpa lagi esok, which means see you tomorrow.

If you are still wondering when should you opt for these greeting expressions, here are a few examples:

Significance Of Greetings In Malay Culture

Why is it important to greet people when being in Malaysia? Why? Well, if Malaysia is a foreign country to you, then you need to know some key points why greetings are essential in Asian culture.

1. Most importantly, native speakers are easily impressed if you choose to express in their Bahasa (it resembles appreciation to the local community by using their native tongue instead of your own).

2. Greetings in the local culture will reflect your overall personality as an individual; in a sense of manners and courtesy, regardless of background identity.

3. If you continuously show interest in their linguistics and heritage, it will definitely help you to have a great experience mingling around with the locals!

Learning more about how to greet in the Malay language will definitely make you popular among the Malay speakers. Feel free to learn other Malay basic phrases and expressions or even other languages through Ling App – the best, interactive website that provides you access to language learning for free!