Are you struggling to memorize some of the words in the Latvian language? Well, there have been a lot of cases where people fail to understand the core and essential elements and unwittingly jump forward to form complex sentences. It is a common mistake among new language learners, and I can tell you that from my experience. However, the problem is not unsolvable. You can also become a pro-Latvian speaker within a few months. One way to do this is by memorizing terms that you can use in daily life. For instance, you can start with the basic Latvian relationship vocab.

Thus, to give you the best guide, this blog is prepared with comprehensive content covering all the basic relationship vocabulary and some examples of phrases you can immediately use to engage in conversations with Latvian people. If you are willing to reach the heights of enhancement, buckle up and let this blog take you on a language learning journey!

The History Of The Latvian Language

Before learning any new language, knowing its background and nature is always a prerequisite. Especially for native English speakers who have no connection to other different languages with unique dialects and grammatical structures other than their own, it is necessary to have a short brief of the new language.

The Latvian language is the official language of the East Baltic country known as Latvia. It is also known as Lettish among Latvian families and is among the Baltic branch of Indo-European language family members. It is an old language with similar ancestral roots to Lithuanian, so Lithuanian dialects are often identical to the Latvian locals. Although many researchers consider it challenging to learn, it is not impossible to know, especially if you are familiar with languages like Russian or Lithuanian.

To help you with the language, we will now proceed to the next lesson, which will give us a deep insight into the essential relationship words with Latvian translation that are the primary stepping stones towards attaining a complete understanding of the language culture as foreigners. 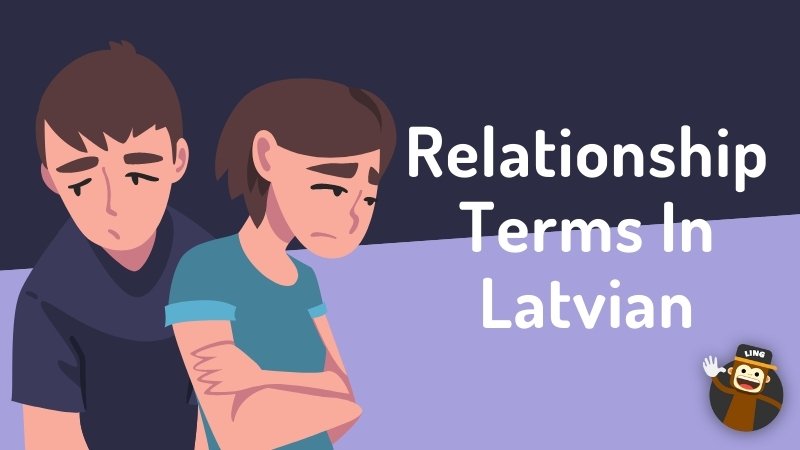 We will move on and get involved with relationship terms such as married, divorced, break up, etc., with proper translations that will help us identify the relationship status in the Latvian language. Further, we will take up some example phrases as well. So, keep reading and try to memorize each word with proper care.

The first status word that we need to know is Precējies. Precējies means married, and it refers to two individuals who are legally dependent on each other and have taken vows to accept each other's presence for eternity.

When two partners are fond of each other and are together but not married, they are said to be in a status where they are engaged. So, Saderinājies refers to human relations in Latvian culture where two people call each other fiance (Līgavainis).

Another important term that describes the relationship between two people who were previously married but have separated now with all legally binding laws is pronounced as Izšķīries. Usually, this means a married couple no longer considers each other their partners and are involved only in co-parenting if they have a child or children.

Another word similar to divorced but slightly different is pronounced Atdalīts. Atdalīts in the Latvian dictionary can refer to those couples who no longer live together under the same roof despite being married. In some cases, they have either entered a divorce settlement or are still legally together. But they seem to have separated on their own will of understanding. Such a relation can be named Atdalīts.

Be careful when you say Izšķirties. It looks very similar to the previous word Izšķīries. However, Izšķīries is something we use to refer to a relationship that has failed without including any legal affiliation. That means the couple was not married. They were what we call girlfriend (Draudzene) and boyfriend (Draugs) and have now decided to part ways.

As you can already guess, Viens means single, which refers to a person who is unmarried, single, or celibate. It can refer to any human being, from youngsters to elders, who have no affection towards another mate. It does not mean they have no friends but being Viens means having no partner engaged in an emotional or physical relationship with them.

In Latvian tradition, when two individuals have borne a child together, they are called Vecāki. Similar to the English term Parents. Irrespective of their relationship status, whether married or divorced, the two partners who gave birth to a child are said to be the child's parents or Vecāki in the Latvian language.