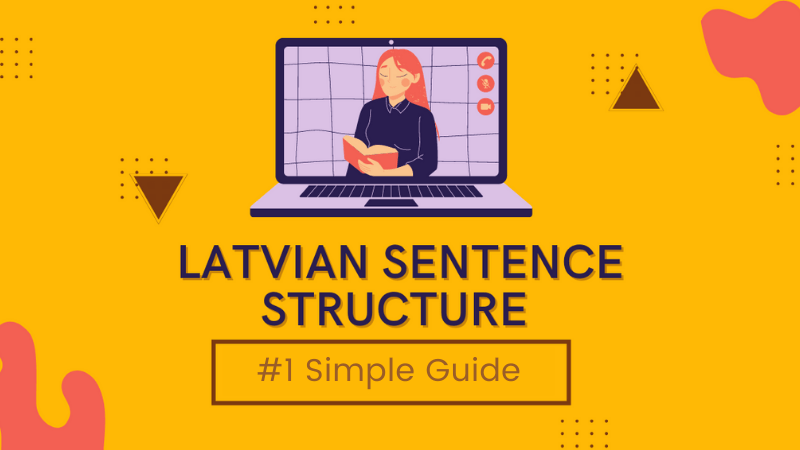 Learning a new language means having a new soul! So, Learn the basics of Latvian sentence structure and master yourself in your targeted modern and international language.

Latvian, also known as Lettish, belongs to the Baltic branch of the Indo-European language family. Approximately 1.5 million people in Latvia use it. It is also used in Australia, Belarus, Brazil, Canada, Estonia, Germany, Lithuania, Russia, Sweden, the United Kingdom, Ukraine, New Zealand, and the United States. Ethnologue estimates that approximately 1.7 million people worldwide claim that Latvian is their primary language.

Although the closest relative of Latvian is Lithuanian, the two languages cannot understand each other. Both are believed to have evolved from a hypothetical common ancestor and are called primitive Baltic Slavic languages. Further, both Lithuanian and Latvian retain many of the characteristics of primitive Indo-European languages, especially in their noun systems. Of these two languages, Lithuanian is more traditional and retains more ancient forms than Latvian.

Although Latvia is small in size, Latvian has many regional dialects that can be understood mutually. There are some disputes about its classification. Latvian scholars have traditionally divided it into three groups, namely:

The Latvian language is highly inflected with complex grammar.

In Latvian sentence structure, nouns are marked for the following categories:

Latvian verbs agree with their subjects in person and number. They are marked for the following categories:

The order of neutral words in the Latvian sentence structure is “subject – verb – object.” Despite this, other orders are possible. Inflectional endings are concerned with keeping relationships and grammatical roles in a sentence clear. Word order is determined mainly by subject (the sentence or old information) and emphasis (new information). Components with outdated information precede components with new information or those with the most emphasis. Adjectives generally precede nouns that modify them.

The basic vocabulary is essentially Latvian, but the language borrows heavily from Russian, Polish, Swedish, and German because these countries annexed Latvia at different times in its history. Below are some of the common words and phrases in Latvian.

Speak Modern Latvian Like A Native Speakers With Ling App

If you’re tired of using Google Translate or have poor speaking skills, why not search and try Simya Solutions‘ Ling-app or SimplyLearn apps to learn your target language. These language apps are designed to support your learning of different languages, regardless of your current level. So, if you are familiar with the Latvian sentence structure, why not relate Latvian essential words and phrases or love words and expressions?

The Ling app could be accessed via a web-based platform or downloaded for free so that you can learn anytime, anywhere.

On the other hand, SimplyLearn is the perfect travel companion for backpackers. It contains a complete set of phrases (with audio) that can be used for real-world interaction. So, download and log in to the SimplyLearn and Ling app, and start learning Latvian right away!