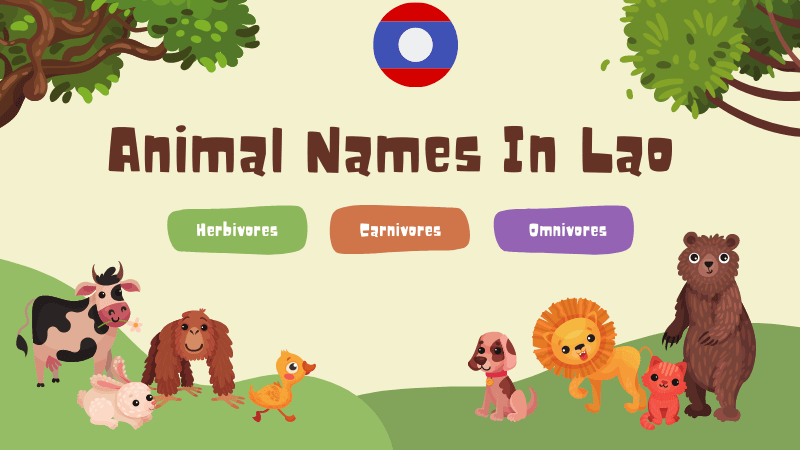 With a moniker like the land of a million elephants, it is no surprise that the elephant is one of the most famous animals in Lao. In the Lao language, the elephant is known as ຊ້າງ sang. Given that Laos is a highly diverse place, there is no surprise why it is also the home to countless species that you can only find in the country. Let's learn more about this in today's post.

Flora And Climate In Lao

The first thing to note about the people's democratic republic of Laos is that it is a densely forested and landlocked country meaning there isn't any marine life to speak of and plenty of tropical forests. The Mekong River, which runs from Northern Laos to Southern Laos, is also another area where many unique species can be found.

It is also a tropical monsoon climate—something again which greatly affects flora and fauna of the country. The dry season is typically between December and April, and the wet season is from May to November. It rains so heavy that you can barely see in front of your face, and then in 10 minutes, it's a bright sunny day and 30 degrees.

This is something Lao people are very used to. Only the heaviest rain will stop people from going out on their motorbikes and traveling at roughly the same speed, albeit with a raincoat on. Note: Even if the front of the raincoat is obscuring their headlight.

Laos is particularly famous for its Gibbons- there are six different species found in the country. Unfortunately, as we'll see a lot on this list, gibbons' habitat is under threat. Thankfully there are people out there to protect them. In 1996 a team at Gibbon experience started a project which endeavored to protect them. They provide sustainable tours and preserve and conserve the land of the Bokeo Forest that the gibbons use. Not only that, but they also help out the local Lao community by providing 120 jobs- something much needed in rural Lao.

The Asian elephant is the most iconic animal in the region and the most cherished by the Lao people. As mentioned earlier, elephants were so abundant and free reigning in Laos; there were millions of them. But, unfortunately, there are estimated to be only 400 wild elephants left in Laos, making them a critically endangered species.

There are myriad reasons for such a rapid decline in numbers, but the central one is deforestation. Laos has lost 30% of its forests over the last 70 years.

The tale of the Indochinese Tiger is another sad one mirroring the decline of the Asian elephant.

For all intents and purposes, tigers are extinct in Laos, although there are still sightings in the jungle between Laos and Vietnam, where the landscape provides them the best protection.

As well as habitat encroachment, another massive problem affecting Lao tigers is poaching. There is an erroneous belief that parts of tigers have medicinal effects, particularly in China.

Globally the population of tigers is a sad state of affairs. It is estimated that there are only 4000 tigers left in the world.

Undoubtedly the most feared is the monocled cobra. A bite will kill an average person in 60 minutes, which means you definitely don't want to get bitten in a rural area. Although far from being a 'polite animal,' fear around snakes is unfounded and is just sensationalism. The chances of encountering a snake in Laos(at least one that has is deadly and bites you) is tiny. About 2500 people per year are killed in the whole of South East Asia, which sounds like a lot until you consider that 22000 people are killed each year in road traffic accidents in Thailand alone.

Unfortunately, we've run out of time today but keep an eye out for future articles on future animals like sun bears, wild water buffalo, clouded leopard, and pygmy slow loris. As I end this post, it's time for me to recommend that you learn Lao with Ling.

We are unrivaled when it comes to an app that uses gamification elements for lesser-spoken languages. A thing not to overlook is that all our listening exercises are recorded by native speakers and not from non-native speakers, or worse, from a bot.

Also, keep an eye out for Ling Live. At the moment, we're only focusing on connecting Thai learners with Thai teachers, but we hope to do the same with Lao in the future.

Being part of a community is vital for your language learning. It is easy to drift into not doing the work because you don't have other people to spur you on. That's why we're also trying to build the community around this blog. My favorite blogs recently have been rooms in Lao and Lao sports vocabulary.