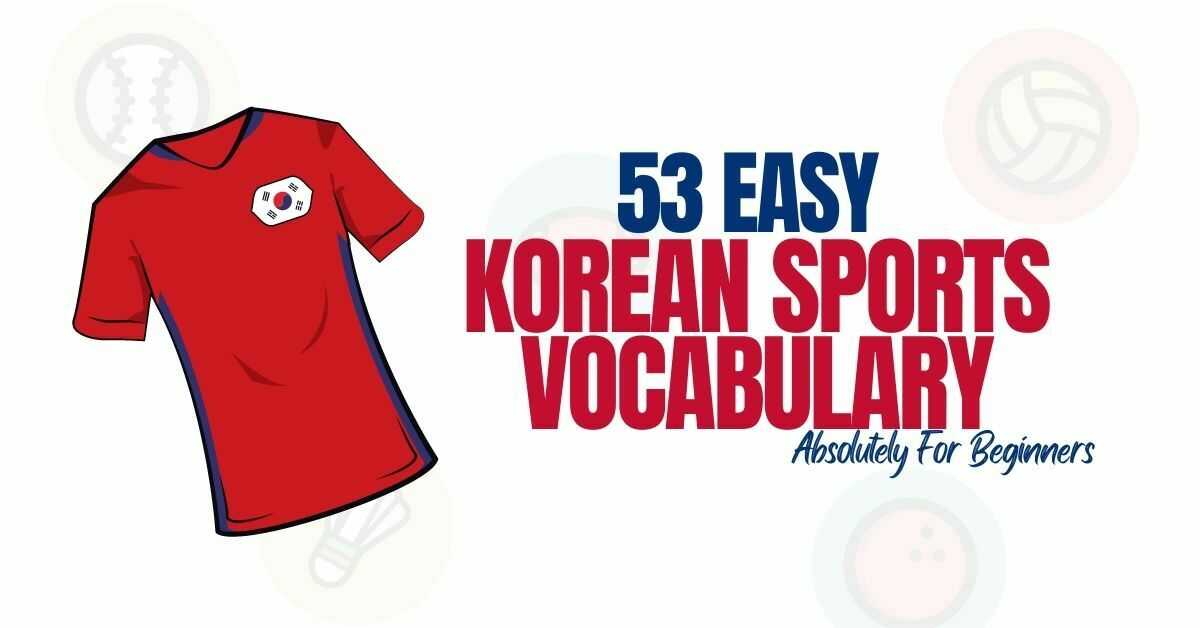 Are you a sporty type of person? Are you inspired by different K-dramas like Weightlifting Fairy Kim Bok Joo? Then, you're in the right place to learn Korean sports vocabulary.

In this blog post, you will learn that Korea is more than just smartphones, cosmetics, K-pop, and K-dramas. They also have a lot to offer when it comes to sports. So, if you love sports and Korean culture, let's start learning Korean sports vocabulary. You may also check the Ling App website for more fun activities and topics to learn.

How To Say Sports In Korean Language

The first Korean sports vocabulary that we need to learn is the word sports. The Korean word for sports is 스포츠 (Seupocheu). It sounds almost like the English translation, so it's not that hard to remember.

Did you know that in the late 19th century, the Joseon dynasty opened up to the outside world, which led them to introduce Korea to modern sports? Since then, Koreans have been part of the international arena carrying their fighting spirit even during the most challenging times.

While Korea is currently famous for its iconic K-pop idols and K-drama actors and actresses, little did you know that Koreans also have sports athletes that brought their flag to the international stage? Let me name some of them:

Most Popular Sports To Play With Your Korean Friends

Do you remember the scene in "Crash Landing On You" when they watched a football match between Korea and Japan? During that time, the North Korean soldiers did not mind that they were in South Korea. All they felt was that they were one country competing against another country.

Now that you're down here, why don't we learn some of the most popular sports in South Korea that you can play with your friends? This Korean sports vocabulary will also help those joining the Olympics or Asian Games when it will be held in South Korea.

So, channel your inner sporty self, and let's start learning Korean sports vocabulary.

Taekwondo-태권도 (Taegwondo) is a self-defense sport/discipline that is famous in South Korea. If you want to see a glimpse of this sport while enjoying the Korean culture, I will suggest watching the K-drama "Fight For My Way." Like what Gong Man said, "I may live embarrassingly every day, but you shouldn’t! Don’t look down on yourself!".

Did you know that South Korea was the first team Asian Football Confederation that reached the 2002 FIFA World Cup semi-finals? This is another one of the most popular sports in South Korea that almost every Korean is interested in. The South Korea National Football Team represents their country and their captain is Son Heung-min.

You may also want to learn the word American football 미식축구 (misikchukgu) which is related to 축구 (Chukgu). Of course, when we talk about football, we can't miss the iconic scene in Reply 1988 when they play football 축구 (Chukgu) in a restricted open lot. You know what happened next.

In Korea, they have the KBO League which is the highest level league of baseball. Some of the popular teams are Hanwha, Doosan, and Kiwoom. You might also hear the names of Jung Eun-won, Kim Min-woo, and Choi Jae-hoon as popular baseball players.

If you heard about the Kdrama "Hot Stove League," although this drama doesn't actually tell you about playing baseball, it would teach you the hard work you'll give just to make a winning team.

When we talk about Korean sports vocabulary, we should not miss learning about basketball which is also a huge sport in the world. In Korea, they have the Korean Basketball League, a professional men's basketball league in their country. They are also represented by South Korea Men's National Basketball Team in different international competitions.

If you have watched "18 Again" you will surely fall in love with this sport. Although it's not the main theme of the drama, they are showing off some basketball moves and life lessons related to playing basketball. And who would forget this touching line? "You said you were the happiest when you watch me play. I wanted to show you again."

You wouldn't want to miss watching "Thumping Spike" if you love volleyball 배구 (Baegu) because it will teach you a lot from winning and losing a game. Like what they say, "Well. It's good to dream big."

Another sport that you will usually see in their dramas is the golf 골프 (Gol peu). In Korea, they have the Korean Tour, which is a professional men's golf tour which is run by Korea Professional Golfers' Association of South Korea.

If you're into Korean golf, you have surely heard of "Birdie Buddy," which story revolves around a pro golfer and her journey into being the golf queen. There's this memorable line from this drama that says, "I really want to do well at this upcoming match! I’m going to try really, really hard! Because it may be my dad’s first memory of a match. I really want to win.” – Mi Soo"

If you love hockey 하키 (haki) so much, but you're in Korea, you'll also fall in love with ice hockey 아이스하키 (Aiseuhaki). The Republic of Korea is proudly represented by the South Korea Men's National Ice Hockey Team, which is currently ranked 16th in the IIHF World Rankings.

You might as well want to check the Kdrama "Puck!" if you really love ice hockey 아이스하키 (Aiseuhaki). You'll enjoy the ups and downs of being an iced hockey coach and an iced hockey player.

Talking about the sport Rugby, the world should watch out for the South Korea National Rugby Union Team as they are yet to make their debut at the Rugby World Cup. Having Charles Louw as their Head coach and Kim Jeong-Min as their captain will surely make Koreans proud.

The Kdrama "Innocent Thing " will make your heart warm when you love 럭비 (Reokbi). The inspiring scene and lines from this drama will definitely inspire you to pursue this sport more.

Talking about swimming, the name Park Tae-hwan will never be forgotten. He is an Olympic gold medalist and world champion in swimming. Korea also has the Republic of Korea Swimming team who represents Korea in the Olympics.

Did you know that the gaming culture started in South Korea? If you're an Esport player, you definitely know this. In fact, Korea has the  Korea Esports Association (KeSPA), which manages Esports E스포츠 (Eseupocheu) in their country. Koreans can get really hyped and competitive when it comes to this sport. In fact, there's this scene in "Crash Landing on You," where it features how competitive they can get when playing. Remember Desperate Effort and Tomato Cultivator?

Other Sports In Korean Language

Did you have fun learning popular sports in Korea that you can play with your friends? If yes, here's more. Let's enrich your Korean sports vocabulary by learning these other sports in Korean.

Now that you have learned the different sports in Korean, let's widen your Korean sports vocabulary by learning these Korean words and Korean phrases.