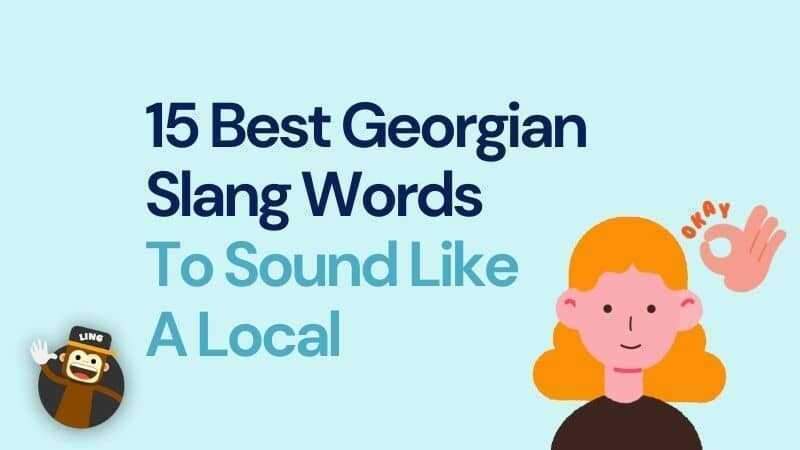 During your trip to the Republic of Georgia, you talk with native speakers but still can’t sound like a local. Do you relate? Then we suggest you start learning Georgian slang words today!

The country has a lot to offer, from amusing tourist attractions and delicious foods. If you are genuinely passionate about impressing the locals with your linguistic skills, then be sure to take note of these best words to use in daily interactions.

Remember that you shouldn’t use these in a professional setting since these are slang words. So, start practicing them with your close Georgian friends!

This term came from the Russian word that means ‘Hello’ or ‘Hey!’ and is often used when talking informally to the locals. This greeting is commonly used in everyday life of Georgian people such as family, relatives, or acquaintances.

This Georgian slang word describes an individual who lives on someone’s liability or demands a favor without being grateful in return.

Direct translation: a place of living

This term originated from the Jewish word that describes a place of living.’ Because the country adopted the Southern hospitality tradition, Georgians often used this slang word to invite their acquaintances to their house or shack (to have a party or a good time).

Most of the people in Georgia used this term to characterize a person who used to be outdated in fashion. Also, they used this slang word to describe an individual with a conservative mindset who doesn’t shift their perspective quickly.

Direct translation: have a preference for something or someone

This Georgian slang word is ordinarily used to assert and convey their state of preference and affection for something or someone. For instance, some Georgians use this term when a person talks about their interest in someone, such as musicians, actors, or politicians.

This term is similar to the English slang word ‘chick.’ Also, this term is commonly used by men to refer to a woman as beautiful with an alluring physical appearance, dresses elegantly, and looks classy all the time.

Direct translation: for sure or alright

This term is commonly used to answer when there’s an agreement between the community, partners, or acquaintances. For instance, you can hear several Georgian groups saying ‘bazari’ when they agree to do something jointly.

Direct translation: agreed 100% or for sure.

Similar to ‘bazari,’ it has the same meaning, but this saying is frequently used by youngsters from the street regarding fashion and style.

Direct translation: you made me gloomy.

If you have a bad day or are feeling dejected and tell the situation to a Georgian friend, he or she may give comments and say ‘dagruzva.’

Direct translation: I don’t care or f*ck it

This slang word can also be pronounced as ‘daikide,’ often used when a person doesn’t care about a particular person or situation. Moreover, people in Georgian use this term in various situations that connotate the phrase ‘at ease.’

Knowing the basic words when communicating to the locals as a foreigner may surprise them. Using the Georgian term for ‘ara’ when they ask you something that you do not want, like act unlawfully, is a good defense from the abusers (if there is). This term can also be used for foreigners for their safety.

Direct translation: I do not understand

If you are a foreigner in the country and want to hear the complete truth but do not understand what Georgians are saying to you, you should say ‘Ver Gavige’ so that they can explain it again to you.

Eating traditional Georgian foods with your friends is more meaningful if you give worthy and appreciative comments like telling the cooks that the foods they prepared are ‘Gemrieli.’

Direct translation: How much is this?

You should be careful when buying particular goods and products in Georgia so that they (not all of them) may not take advantage of your financial gain. Use this Georgian term to save some money and avoid a crime like overpaying.

Now that you learned some slang words to use in Georgia, you probably want to explore more about its language. If you want to delve into other Georgian words and phrases like ‘seven fridays’ and ‘left-leg’, there are other blog posts that you can read over, like the 15+ Basic Georgian Verbs: Easiest Guide and 33 Georgian Alphabet: Easy Guide In Georgian Script.

Likewise, you can learn the Georgian Language by using the Ling App by Simya Solutions.

The Ling App is an interactive language learning application that guides a beginner or a language learner in achieving language acquisition and proficiency of a specific target language.

Users can also choose other languages to learn because the Ling app offers 60+ foreign languages, both famous and other minority languages.

Moreover, you can learn these different languages in a hassle-free and exciting way because of the gamified activities and engaging language learning skills. Unique features like interactive quizzes, enjoyable flashcards, and exchanging messages and queries using the A.I. chatbot are there to help you master your target language.

In addition, language learners can read educational blog posts based on their target language that has topics like alphabet ad writing system, history, culture, economy, government, parts of speech, and other language-related topics.

Furthermore, the Ling app also provides reliable and honest reviews about other language learning applications. So if you are looking for reviews and relevant blog posts, the professional writers from Ling App will deliver them to you right away.

Can’t wait to witness and unveil the new way of learning a language? Hurry and download Ling App now!