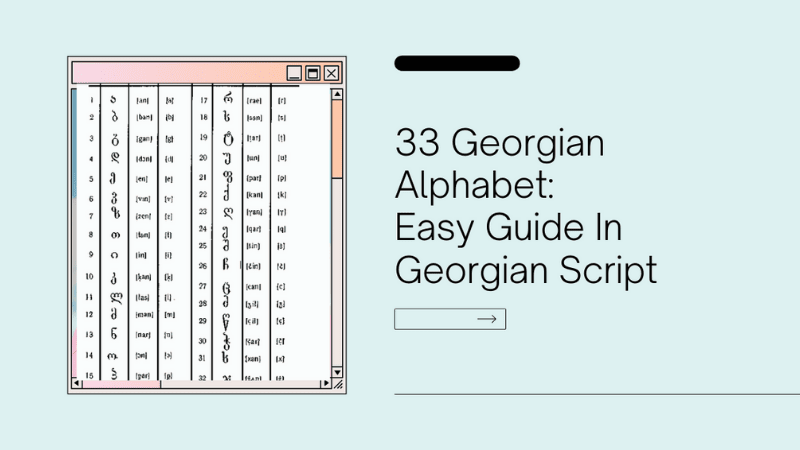 As language learners of the Georgian language, we must understand that it is never enough to focus on memorizing expressions to sound like a native speaker. If you are ready to learn more about that, then let’s begin! What is even more important is to be familiar with the Georgian Alphabet or Ⴋხედრული (Mkhedruli) as well as the unique script.

The official language of Georgian is ქართული ენა (kartuli ena), also known as the Southern Caucasian Language, wherein it is the primary language of 83% of the population in the country (3.9 million). The Georgian language is also used in other countries abroad, such as Armenia, Azerbaijan, Iran, Kazakhstan, Kyrgyzstan, Russia, Tajikistan, Turkey, Turkmenistan, Ukraine, USA, and Uzbekistan. Moreover, it is used throughout ethnographic groups in the country like the South Caucasian language: Svans, Mingrelians, and the Laz.

Also, there is this Judaeo-Georgian Language, also known as the ‘Kirvuli.’ This is considered a separate Jewish language that is spoken by other Georgians (mostly in Israel). According to historians and linguists, the Judaeo-Gerpgoan have separated from Megrelian and Laz, Svan from another language, and Megrelian and Laz from Georgian occurred in the second millennium B.C. or earlier.

Here are the definitions of Caucasian Languages:

Because of the transition and changes of Georgian languages, there are several Georgian literary that was made. That is why the country has a rich literary tradition. For instance, the oldest surviving literary text from the 5th Century A.D. in Georgian scripts is the “Martyrdom of the Holy Queen Shushanik” (Tsamebay tsmindisa Shushanikisi, dedoplisa ) by Iakob Tsurtaveli, from the 5th century A.D. Also, the Georgian national epic from the 12th century, “The Knight in the Panther’s Skin” ( Vepkhistqaosani ), by Shota Rustaveli.

History Of The Georgian Alphabet

But today, Georgians use the modern Georgian alphabet, which has 33 letters. This is the Mkhedruli, a Georgian script that doesn’t have capital letters. Furthermore, this is the only alphabet in the whole world that has the same enunciation the same way that it is written. In short, each of the Georgian letters represents one sound and oppositely. On the other hand, if you look at the old Georgian script, some of the letters are now obsolete.

The Mkhedruli alphabet originated between the 11th and 13th centuries, from an older Georgian alphabet which is the Nuskhuri/Nuskhakhutsuri. It was derived from the word mkhedari, meaning ‘of horseman.’

Before, Mkhedruli Alphabet was only used in secular writings, and the mixture of the two older alphabets was used for religious writings, religious manuscripts, and religious texts. Just like what I mentioned, it is used by the priest who is called the khutsuri.

After some time, the Asomtavruli script and the Nuskhakhutsuri script were no longer used; that’s why Mkhedruli became the exclusive alphabet used to write Georgian. The Mkhedruli is written horizontally (left to right). It can be written in cursive handwriting, but when printed, the letters are not connected. In addition, the letters of Mkhedruli have the same alphabet order as the Greek alphabet.

Vowels In The Georgian Alphabet

In the Georgian writing system, they do not use diphthongs because it does not exist.

Consonants In The Georgian Alphabet

As mentioned above, the modern Georgian script has 28 consonants. It has two kinds (six ejective consonants and two velar fricatives). Below are the 28 consonants that Georgians used.

Below are the Georgian alphabets with their writing systems, Georgian names and International Phonetic Alphabet (IPA).

These six letters are pronounced the same as in English pronunciation

Georgian alphabet has eight fricatives, and six of these are found in the English alphabet. Below are the examples:

The six aspirated Georgian consonants are pronounced with a small breath of air. Georgian pronounced these letters only if the letter is in the first syllable. Below are some of the examples:

These are the uniquely Georgian sounds that English speakers may find difficult to pronounce.

Is Georgian Alphabet Hard To Learn?

As you read the lessons about Georgian alphabets, many of you will probably think that it is hard, but it is not. Just because the Georgian fonts (Mkhedruli letters) or their writing style (strictly structural terms) has this kind of unique element than other languages, you can understand it thoroughly if you practice well. Based on the discussion above, each Georgian letter represents one sound. So you must first familiarize yourself with the Georgian alphabet so that you may be able to understand and use its functions.

Another thing is, Georgian today adapts many foreign words, such as the Turkish, Persian, and Arabic languages. So you may be familiar with other Georgian terms if you somehow live or know some words in these countries. You can also read other blog posts related to the Georgian language, such as Common Georgian animal names and Common Georgian vegetable names, and see if you can read the Georgian scripts based on what you have learned in today’s blog post.

Want to know more about the Georgian language? You can discover more of this language by downloading Ling App by Simya Solutions.

Ling App is a user-friendly language learning application that offers interactive games like mini-games to learn in a fun way. Through this, it can help you master your target language for 10 minutes a day. It can also teach you other languages because it provides 60 languages from different countries. Furthermore, you can read informative blog posts every day to know more about the language you are learning.

So, what are you waiting for? Download and learn a new language with Ling App now!