Are you struggling to speak German fluently? Learning German idioms may give you the boost you need to improve your german speaking skills. Perhaps, after some time learning the language, you might feel that you’re at a plateau, stuck at a level where you cannot move forward— we know how you feel. That’s why today we bring you a series of German Idioms that will help you feel more confident when communicating with your German friends. You’ll be able to understand/perceive nuances of the language that you may not have gotten before. Are you interested? Los geht’s!

A Little About German Communication Culture

You might have heard that Germans are pretty direct, and that’s true. Unlike other cultures, where people tend to communicate more indirectly and implicitly, Germans tend to get straight to the point.

This communication style makes some foreigners feel that Germans are a bit blunt. However, it is important to understand that their intention is not to offend but to speak clearly and avoid misunderstandings.

Another aspect of German culture that differs from other cultures is the concept of “throwing ideas in the air,” something very common in North American or Spanish-speaking cultures. Germans usually give an opinion when they have something concrete to say. Small talk is not something they do a lot.

In order to improve your German language skills, you need to understand the German communication style. By understanding their intent and the sense of humor hidden behind some of their phrases and idioms, you will be able to perceive much more than you would with common textbook phrases.

Let’s look at some popular German idioms that might be useful among your fellow Germans.

Sometimes for better, sometimes for worse. We all know that every beginning has an end. This expression exists in most languages, but the Germans added a personal touch to it. If we translate it literally, “Alles hat ein Ende, nur die Wurst hat zwei” means “Everything has an end. Only a sausage has two.” But its English equivalent would be “everything comes to an end” or “All good things must come to an end.”

Have you ever come across a person who talks so much that you want to cut off your ear? Well, this expression could be very useful in a similar moment. This phrase means “chew someone’s ear,” it is used when you feel tired and bored of listening to a person talking non-stop.

I love this expression! The first time I heard it, I felt exactly like its meaning, clueless. It means “I only understand train station,” but its English equivalent would be “it’s all Greek to me.” You can use it when someone says something you don’t understand or are unfamiliar with.

I remember the first time a German friend wished me luck with an upcoming exam. We experienced a culture shock when it came to gestures. As I crossed my fingers, she pressed her thumb into the palm of her hand. I learned that day that this expression/gesture means “to press your thumbs for someone” and is used to wish someone good luck.

This expression is used when someone is extremely tired. Translated into English, it means “I’m all done and dusted” or “I’m exhausted.”

Sometimes we get so excited or involved in something that we lose control of our emotions or behavior. In those moments, the phrase “die Kirche im dorf lassen” could remind us to keep our cool. Literally, it means “to leave the church in the village.” Its English equivalent would be “to not get carried away.”

Here is another example where Germans use sausages in their expressions/vocabulary. “Eine Extrawurst haben” literally means to ask for an extra sausage, and it is to ask for special treatment.

The truth always comes out, and according to the Germans, “lies have short legs.” This means that a lie will not get very far.

If you had a night out and had too much to drink, you might wake up the next day with a cat. In German, you use the expression “Einen Kater haben” to say you are hungover.

Has it ever happened to you that you have something right in front of your eyes and don’t see it? Something so obvious that you would have to be blind not to notice it? In situations like that, Germans might say that you “have a tomato in your eye.”

Here’s another sausage expression! Die beleidigte Leberwurst spielen means “to play the offended liver sausage”. It’s used when someone is upset or mad about something simple or unnecessary. It’s making a big deal out of something.

This term generally indicates that a problem starts at the top of a company or organization. Despite its literal meaning (the fish stinks from the head), it is used as a metaphor for bosses who cause problems.

If we have expressions with sausages, why not add vegetables? For example, “da haben wir den Salat” means “there we have the salad,” indicating that a problem or an issue has arisen.

This expression is a little feisty! “Ich bin keine Kuh, die man melken kann meaning “I am not a cow to be milked.” It can be used to call someone out when they’re trying to advantage of you.

When there is tension in the air, the Germans say that the air is burning. Therefore, “da brennt die Luft” means the atmosphere is a little tense.

Finally, we have a slightly Stinky expression. “Die Kacke ist am dampfen” means “the poop is steaming” and is used to express that someone is in trouble.

There you have it! 17 German idioms that will not only allow you to understand the nuances of the language but will also help you to express yourself more fluently using the German sense of humor, which will bring you closer to your German peers.

Are you ready to test your knowledge of German Idioms?

Ling brings you multiple activities where you can test your knowledge and increase your proficiency in the German language. Sign up for a free account and take advantage of Fun and interactive activities to help you memorize and expand your vocabulary. And not only that! Ling has oral activities made in collaboration with native German speakers and educators who truly understand your language-learning needs. As a result, you will be able to improve your pronunciation with each lesson.

Download it today from the App Store or Play Store and start speaking German like a local! Tschüss! 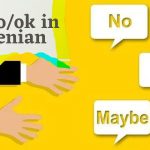 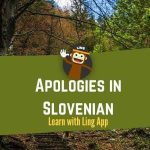 7+ Apologies In Slovenian With Useful Examples 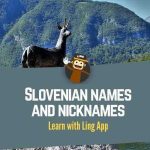 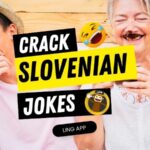 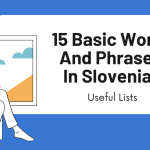 Useful Lists Of 50+ Basic Words And Phrases In Slovenian