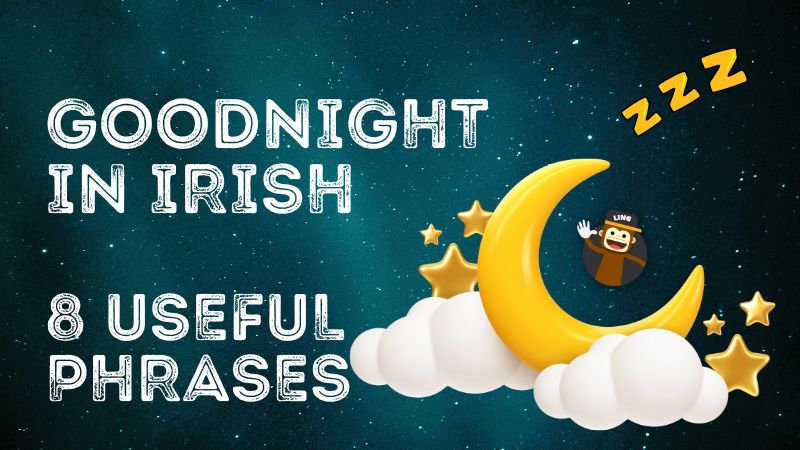 There are a few different ways to say goodnight in Irish, which are definitely worth knowing. The direct translation of goodnight is Oíche mhaith. However, you can also say codladh sámh, which means sleep tight.

Although you didn’t come here to learn good morning in Irish, it’s an interesting phrase to consider because there isn’t really an equivalent. People are more likely to say Dia duit, which literally means ‘may god be with you.’ It is used in the morning, evening as well as night.

There is a version of good morning that you might find in textbooks: maidin mhaith. Although traditional Irish Gaelic speakers see this as an unfortunate anglicized translation; they will understand if you say it to them.

Do you want to sleep well knowing that you’re doing everything possible to maximize your language learning goals?

Software experts and language learning specialists have designed Ling to deliver the perfect blend of a sleek user interface with a well-constructed language course. Ling has state-of-the-art SRS flashcards and mini-games and quizzes that keep you entertained.

Ireland has a rich and interesting folklore generally, so unsurprisingly, the same is true around dreaming and saying goodnight in Irish.

The internet is awash with different symbolic meanings of dreams, some of which are vaguely scientific, but most of which fall into the category of pseudoscience.

For example, I read this in an account of an Irish immigrant to America in the 1880s. ‘Never tell your dreams fasting, and always tell them first to a woman called Mary. To dream of a hearse with white plumes is a wedding; but to dream of a wedding is grief, and death will follow. To dream of a woman kissing you is deceit; but of a man, friendship; and to dream of a horse is exceedingly lucky.’

In my research, I couldn’t even find an Irish God representing the world of dreams. The closest it seems is Angus, who in one account is the God of dreams and love but in another source is described as The God of youth, love, summer, and poetic inspiration. I suppose poetic inspiration has a certain relationship with dreams.

Has Anyone Attempted To Systematically Categorize Dreams?

The most famous proponent of dream analysis was Sigmund Freud (writing a little after the aforementioned Irish woman was making her way to America).

Freud thought that analyzing dreams was the golden road to the unconscious, and the whole point of psychotherapy was to resolve problems birthed in the unconscious mind.

The interpretation of dreams is a difficult book to get through, mainly because the writing is quite dense and antiquated. However, there are some valuable insights and hypotheses’ such as a person’s dreams are driven by their wishes, which are often suppressed by the conscious mind.

Why Do Modern Scientists Think We Dream?

Modern dream scholars take a more scientific approach, and several theories have been put forward to explain why we dream.

After reading Freud’s book, I found that I began to analyze dreams more rationally. For example, in one dream, I was standing beside a brown river where bottles stuffed with notepad paper floated down. In the dream, I had a desire to retrieve the messages. Perhaps it seems like madness, but what’s also to consider is that I was late for work and my job is as a writer. The brown river represents the coffee that I drink every morning before starting, and the messages in the bottles are the words still floating unformed!

Learn The Irish Language With Ling

We hope you enjoyed this article on how to say goodnight in Irish.

Are you looking for a bitesize Irish Gaelic class that does more than just teach you one individual Irish word at a time?

Do a Ling lesson just before sleep, and be confident that you’ll drift off into a peaceful and undisturbed night’s rest. All you need to do is sign up and do your 15 mins of Irish study a day.

Rome was not built in a day, neither was Dublin, nor will you fully master Irish in 24 hours, but Ling is the single biggest step you can take to accomplish your goals.

If you liked this blog, why not check out some other popular ones, such as regions of Ireland and Irish wedding traditions.