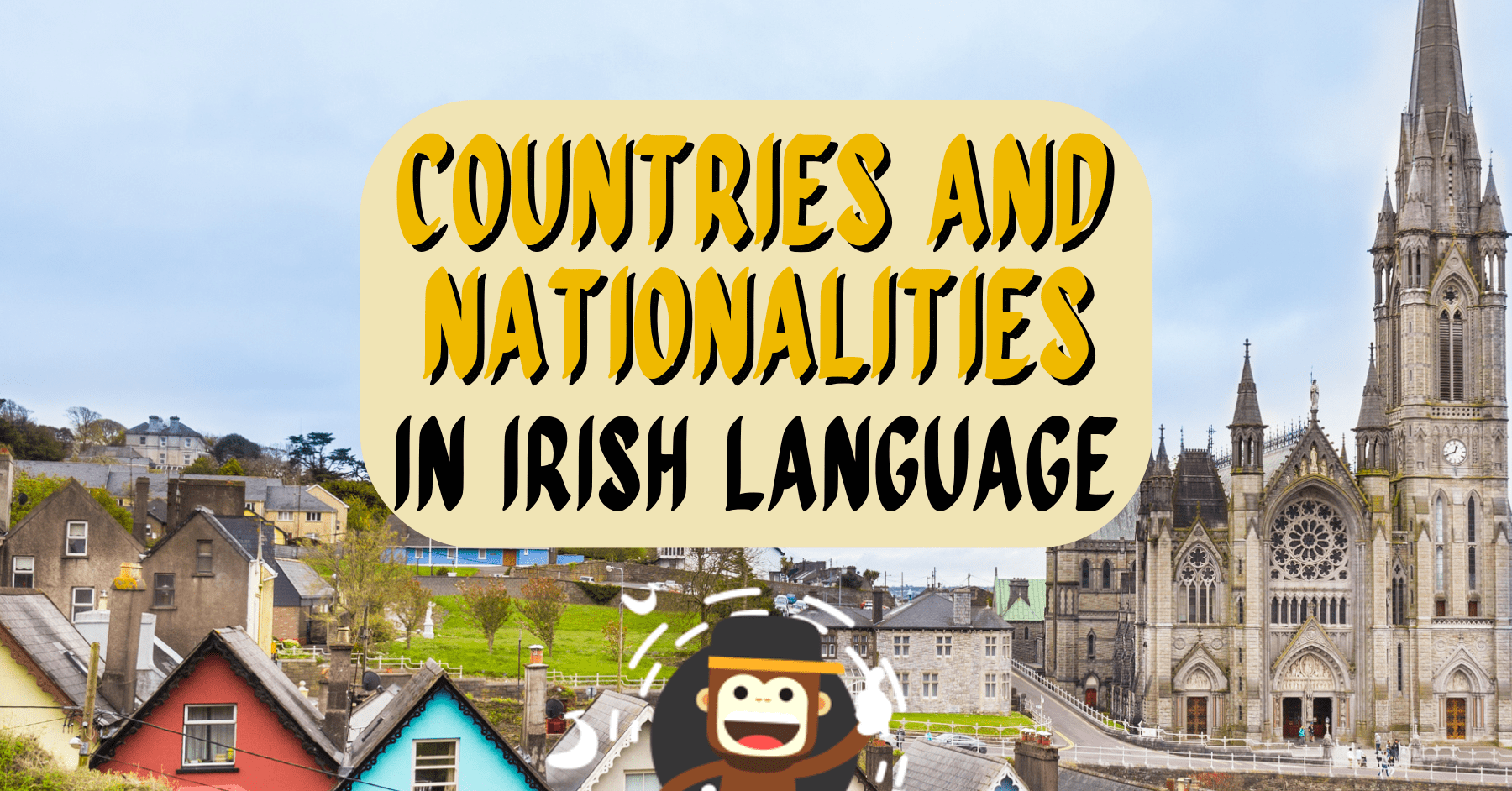 Ever wondered what An t-Sìn or Braiseal means for the Irish people? In today's post, we will walk you through the correct translations for the names of countries and their citizens so that you can answers critical questions like cad as duit? (where are you from?) or cén náisiúntacht atá agat? (what is your nationality?) like a pro!

Ireland is a country situated in Western Europe and is famous for its food, drinks, arts, and landscape. It was even ranked as the 23rd best country globally, which is why there is no wonder why there is an interest in mastering the native language of this country.

Contrary to common belief, this category of vocabulary words under the Irish language is not as challenging to master as you think it may be. In fact, many of the ones you will learn here today are not that different from the English counterpart. You simply have to get used to the spelling and pronunciation. Another thing you should know is that the Irish language has two types of names for countries: with article and one without a definite article "an."

Here, the article "an" automatically alters the sound of a consonant when pronounced. So, for instance, when a country begins with the letter s, there will be a phonetic change so that it may sound like the letter t. And as a rule of time, do remember that this rule is the same for all the Irish nouns of feminine nature. To get to know further how it works, let's review the translations below for the most commonly visiting nationalities in the country:

Based on population studies in Ireland, there are over 10,000 migrants that came from Brazil or Braiseal. The Brazilian nationals or Breatannach have influenced the country in different aspects such as in cuisine, language, and even the way of life.

Morocco or Moroco is one of the closest Arab countries to Ireland, so they share a history of bilateral trade and are pretty much involved with each other's growth affairs. The Moroccan people, or simply Moroccanin Irish language, are some of the people who are actively traveling to the country.

The Irish people know the country as an Pholainn, and its citizens are best known as Polainnis. Nevertheless, the countries are very much connected, especially when Ireland willingly accepted Polish immigrants way back in early 2004.

This country is best known by the Irish as an Fhionlainn and is one of the most popular foreign countries since their football teams are usually playing against each other. The nationalities of the people who come from this country are known as Fionlainnis.

The country is known by the Irish as An Eilvéis, and its people are fondly called Eilvéiseach. Based on reports, the number of citizens coming from both countries increases with about 8,000 Irish people in Switzerland and about 88,000 Swiss tourists coming to Ireland.

An Iodáil or Italy is one of the closest political allies or Ireland, and they have shared this relationship for centuries. With this being said, both countries have influenced each other, especially in terms of cuisine. In fact, recent reports show that Italian or Iodáilis food is the most popular international cuisine.

The country An Rúis or Russia is another close ally of Ireland since they are both full members of the Organization of Security and Cooperation in Europe and the Council of Europe. So the direct translation for Russians is Rúiseach.

The Kingdom of Belgium is known by the Irish people as An Bheilg, while its citizens are called Beilgeach. As of today, both countries have a massive number of immigrants, with about 30,000 Irish living in the country and about a few thousand Belgians in Ireland.

The Republic of China is known as an t-Sìn, and its people are known as Sínis. The two countries have deep connections, but given the current aggressive stance of China, Ireland is still on the rut on how their relationships will be in the near future.

Spain is known as an Spáinn, and its people as Spainnis. Among all the countries, the history of these two is deeply connected as they are allies in terms of military, economic, political, and even religious forces.

Other Translations For Country Names And Nationalities

As we reach this part of the post, we hope that you were able to discover the correct translation and that you may be able to use any of these when introducing yourself. You can simply use the basic formula like:

Tá mé as + the country to express what country you are from. Also, you may say, "Is Meiriceánach mé" If you want to say that you are an American.

If you enjoyed this post, be sure to check out our other posts related to the Irish language, like the family words, how to introduce yourself, and the vocabulary words about transportation. However, if you'd like to master the Irish language truly, we have a language learning application that is perfect for you! Continue reading below to find out!

Learn More About Ireland And Its Language Today!

Whether you are traveling to a country for the first time or planning to learn a foreign language truly, you recommend that you use tools that can keep you motivated and excited to learn. Our advice? You better check out the Ling App by Simya Solutions!

The Ling App is a modern language learning tool perfect for language enthusiasts of all levels. It comes equipped with lessons and fun games in over 60+ languages, making it one of the more comprehensive tools today! At the core of its development is the idea of gamification which means that the whole app is guaranteed to make you learn without ever feeling stressed or overwhelmed! To make things much more interesting, it even integrated an AI chatbot so that you can practice your freshly learned words anytime!

So, what are you waiting for? Download the Ling App from the PlayStore and AppStore, or try out its web version today! 50+ Best Irish Slang Words And Phrases To Try Out