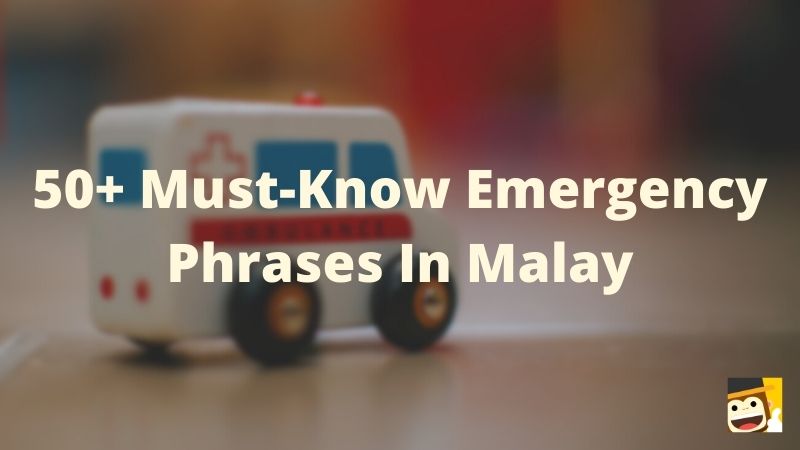 No matter where your travels take you next, you should always be equipped with the most important emergency phrases in that native language. You never know what could happen on your trip - you might fall and injure yourself, lose your friend while hiking, or be on the brink of dehydration and desperately need water. But, if you know some emergency phrases, then you don't have to worry about ever being stuck in one of these situations!

If you're making a trip to Malaysia, don't worry, we have 50+ must-know emergency phrases in Malay that can help you if you find yourself in unexpected circumstances. That way, you don't need to spend time scrolling the internet to find each phrase. In fact, we have compiled them all for you in this post! All you have to do is put in some time and effort, and you'll be able to learn Malay and these basic Malay phrases before you know it!

What Is The Malay Language?

Now, what exactly is Malay? Is Malay hard to learn? We'll answer these questions, and many more, here!

What Exactly Is Malay?

Malay is an Austronesian language, which is a language family that's spoken throughout Maritime Southeast Asia, Madagascar, the islands of the Pacific Ocean, and Taiwan.

Where Is Malay Used?

As you might have already guessed, Malay is widely used in Malaysia, a country located in Southeast Asia. However, the language can also be found in Indonesia, Brunei, Singapore, East Timor, and southern Thailand. To this day, there are 290 million Malay speakers in the world.

As you can see, learning Malay will allow you to use your language skills in multiple countries. So, if you love traveling to Southeast Asia, are planning on being an exchange student, or want to work there in the future, Malay is definitely an important language to learn!

Why Are There So Many Names For Malay?!?

Yes, there are different names for the Malay language, depending on where you are. We know it can be confusing, so we're here to help you! Please refer to the following table to learn what each country calls Malay.

We hope this helps clear things up and that you're never confused again!

Is Malay Hard To Learn?

Of course, this all depends on who you ask. But, for the most part, Malay shouldn't be too difficult to learn if you dedicate some time to learning every day.

Malay is now written in the Latin script, so if you're already familiar with this script, then writing and reading shouldn't be too challenging.

Malay is also not a tonal language, so you don't need to worry about pronouncing words according to a certain tone. This is the opposite for a language like, for example, Thai.

For the most part, Malay also doesn't use punctuation. When writing or typing out sentences, you don't need to think about where to place periods, question marks, or any other form of punctuation!

So, how does all that sound to you? Pretty easy, right? You can always do more research if you're really interested to know more about the structure of the Malay language. But, for now, let's move on to talk about the 50+ emergency phrases in Malay!

Here are the most important Malay phrases to know if you're ever in an emergency situation in Malaysia or another country that speaks Malay.

Are you interested in learning more about Malay? The popular language-learning app, Ling, has lessons in over 60 languages and can teach you all you need to know!

Ling tailors its app in order for you to learn as effectively as possible. The app features hundreds of lessons with retainable and relevant vocabulary, meaning that you'll actually be able to use what you learn in the real world. You also have the opportunity to practice writing the language correctly, which a lot of language learning apps fail to include. Most importantly, you can practice your pronunciation and conversational skills by communicating with the app's interactive AI chatbot. These are just are few of Ling's great features, not to mention that it's available to download for iOS, Android, and desktop devices!

Outside of the app, Ling has an amazing free language blog if you want to learn more about a specific language, country, culture, food, or just get some extra language tips! The support team at Ling is also very helpful if you ever have any questions about or problems with the app.

Whether you're an avid language learner or just starting your language learning journey, Ling is a great app to have by your side!