5 Best Places To Visit in Serbia

I believe many people will agree that there are a lot of places in Serbia that deserve to be on this list of 5 places to visit in Serbia. It was not easy to make a cut and decide on this one, because the title of the most beautiful places in Serbia should be taken by the very special ones, which leave the strongest impression and to which we would gladly return again.

Serbia has landscapes that range from the endless plains of Vojvodina in the north - the country's breadbasket and wine cellar - to the dramatic mountains and gorges of the national parks in the south, west, and east of this former Yugoslav republic.

The legacies left by former rulers such as the Habsburgs and the Ottoman Turks can be found in everything from the architecture to the cuisine, where East really does meet West.

Here are 5 places that will whet appetites for this underrated corner of Eastern Europe when you travel here:

For three centuries, Novi Sad / Újvidék / Neusatz has been a space of diverse, rich cultural heritage of many peoples living in it under these names. Tangible and intangible cultural heritage created in past centuries has been the basis on which the interactive network of scientific and cultural institutions rests, making Novi Sad today a space for an active meeting of cultures and different identities. It's the second-largest city and one of the best places to visit in Serbia.

The urban city center is adorned with Baroque, Neo-Renaissance, Classicist, and Bauhaus buildings, as well as numerous religious buildings. Every visitor, according to their inner feeling of beauty and pleasantness, attractiveness and cheerfulness, usefulness and accessibility, can create their own atmosphere by getting to know all the layers of the past and present of Novi Sad. It's a city on the Danube, a city of European history. Its tradition and Balkan hospitality are experiences you will miss.

So-called "Serbian Athens" attracts visitors with its orderliness, secure anchorage next to the Petrovaradinska tvrđava (Petrovaradin Fortress) – so-called Gibraltar on the Danube - home to the City Museum, a church, and the annual Exit music festival. There are many more reasons why tourists love to visit this fantastic city - the different languages spoken by its inhabitants and the rhythm that deviates from the hectic, chaotic city weather.

In the vicinity of the urban city center, there are picnic areas, beautiful flora, and fauna served ecosystems and a complex of Orthodox monasteries in the area of the Fruška Gora National Park. Farms, čarde (restaurant on the riverside), and wine roads on the outskirts of Novi Sad offer visitors the opportunity to experience all the richness of gastronomy and rural customs.

Kalemegdanksa tvrđava (Kalemegdan Fortress) is one of the symbols of Belgrade and a location that must be visited by anyone who comes to the capital of Serbia. Many consider the sunset from Kalemegdan to be one of the most beautiful scenes you can experience in Serbia.

Kalemegdan Park and Fortress are arranged, organized, and adapted to tourists. The popular Kalemegdan consists of the Gornji and Donji grad (Lower and Upper Town). Within Kalemegdan, there is a military museum, the National Observatory, the Gallery of the Natural History Museum of Kalemegdan, the Church of the Rosary, Chapel of St. Petka, Winner, Tomb of National Heroes, Nebojsa Tower, Belgrade Zoo…

Dorćol is one of the city's most attractive neighborhoods and has dozens of kafana (Serbian traditional bars where Živeli is the most common word) and restaurants. Visitors can check out the lively nightlife along the Sava and Dunav rivers, where floating clubs and bars hug the riverbanks. The buzzing nightclubs of Savamala are passed along the way.

Meanwhile, Skadarlija, the closest thing Belgrade has to a touristy district, features 19th-century cobblestone streets filled with restaurants and kafane that hum to a live soundtrack provided by folk musicians.

One of the first things everyone thinks of when talking about Uvac is the beautiful meanders of Uvac. Meanders can be seen from numerous lookouts from the surrounding villages and by far the most famous is the lookout Molitva (Prayer).

If it is not enough for you to just watch the meanders, you can cruise them with boats, and you can catch some fish if you are a fan of fishing. Uvac is very rich in trout, carp, chub… As Uvac is a nature reserve, fishing is possible only if you have a permit for recreational fishing.

If you are lucky, you can also see the unique dance of beloglavih supova (Griffon Vultures) during mating, when they fly to incredible heights, grab their claws and then perform a free fall.

In addition to the small caves in which these beautiful birds hide, the Uvac reserve also hides several large caves in its gorges, the largest of which is the still insufficiently explored Ledena pećina (Ice Cave). The access has been arranged with about 600 meters of trail through the halls, which you should not enter without a jacket, even in summer, because the temperature is around 8 degrees Celsius.

If you love nature, water, quiet places, and good food, Krupajsko vrelo is the right choice for you. Passing by the old mill, you come to a narrow road along the rock wall, where there are pools with oblong trout.

Continue along the forest path and spring will appear in front of you. The blue color on the surface and the greenery in the surroundings make the place feel unreal. There is no word that can describe the idyll of Krupajski vrelo - it just has to be seen.

Tip: It is best to visit the spring in spring or summer, especially around noon when the sun is at its zenith and when the most beautiful shades of blue create an even more magical scene.

Stopića pećina is specific in that the Trnavski stream flows through it, which with its water flow makes this cave extremely attractive for visitors. At higher waters, a unique 9.44 m high waterfall is formed. Of course, you will also notice the inhabitants of the caves, bats, who are accompanied here by shrimps, spiders, and fish. Bigrene kade (Bigrene tubs), with their specificity, represent a trademark of the cave. Our advice is to visit this cave after the rains when the tubs are filled with water and when all their beauty and exceptionality come to the fore. It is only 19 km away from the tourist center Zlatibor.

Those were only the best places to visit in Serbia in my opinion. Serbia has many more beautiful places to offer like Tara national park, Studenica monastery, Mokra Gora, Skull tower in the city of Niš, Golubac fortress, Sremski Karlovci, Drina river, Devil's town, and other great places for day trips in Serbia.

There is no better way of learning languages than to visit the country where people speak it. Serbian can be hard to learn and the best way to do it is to surround yourself with people who speak that beautiful language, along with the culture, buildings, history and so many other things that are related to it.

Using language learning apps such as Ling App can be a very good way to learn Common Serbian Phrases For Travel to be ready for the adventure of your life in Serbia. 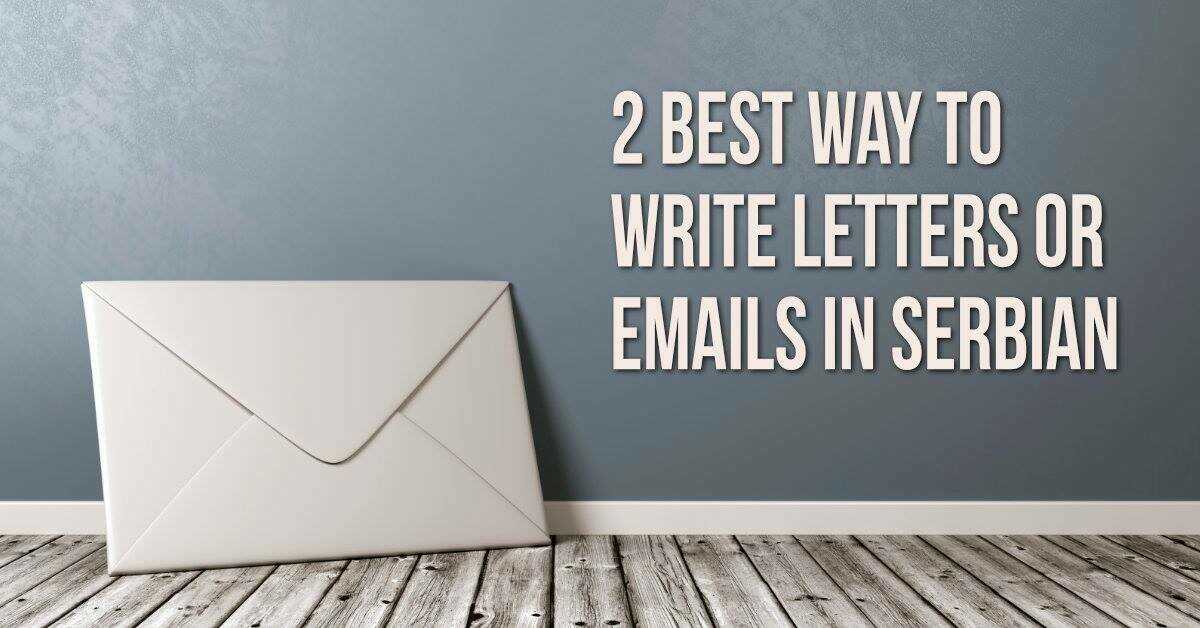