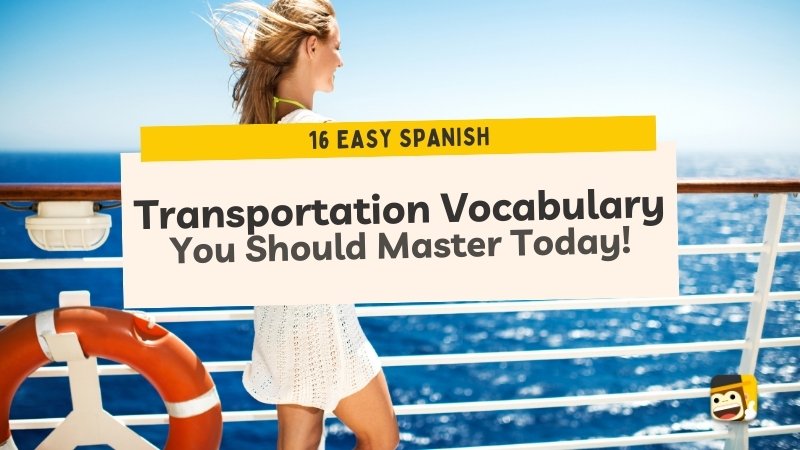 Summer is almost here, which means many people are beginning to plan their next vacation abroad. Or maybe you are planning your Spanish language study in a Spanish-speaking country.

If this is the case, you are most likely interested in knowing how you will get to your destination and move around once you get there. Will you take a plane? Will you have the most fantastic cruise experience? Or maybe you are traveling on your continent, and a train or a bus are good options for sightseeing.

Whatever your answer is, having enough Spanish transportation vocabulary can give you a trouble-free journey. It will help you while booking or talking with natives about your travel options around Spanish-speaking countries.

Why Should You Learn Transportation Words In Spanish?

Transportation is what makes our travel a reality. Knowing that you can travel from Asia to America or from Africa to Europe in a short period makes you appreciate the means of transportation that humanity has.

While learning Spanish, or any other language, you should practice the phrases and words native speakers use to talk about different transportations in their region. Knowing the local language is always a big plus for you!

It can come in handy in different situations. For example, you may come across a bus ticket booth where the staff doesn't speak English, so you would have to communicate in Spanish to buy your tickets.

That reminded me of a story that happened to some foreign friends in my country, Ecuador. They tried to buy boat tickets in a very touristy area.

However, they had to go through a complicated language barrier since they could not express themselves in Spanish. They didn't know how to say 'boat,' much less any other important word such as 'cost' or 'quantity.'

As you can see, it is not a given that you will find English-speaking staff abroad, whether it is in Latin America, Spain, or any other country, you should go prepared with at least some basic vocabulary. Even more, if your travel purpose is to study and practice Spanish to become fluent.

That being said, let's begin with today's lesson about transportation vocabulary in Spanish!

What Is The Word For Transportation In Spanish?

This term would refer to a single mode of transportation, for example, one bus, one taxi, one car, etc.

You can also use this term to refer to transportation in general terms. For example, you can say 'Medio de transporte' (Means of transport)

On the other hand, you can use this term to refer to more than one vehicle.

For example, two cars, three buses, four boats, and so on, are 'transportes'.

An example in a sentence would be: 'Cooperativa de transportes' ('Transport cooperative').

Me bajo en la siguiente parada de bus. (I get off at the next bus stop.)

Atravesare el país en moto. (I will cross the country on a motorcycle.)

El taxi cobra demasiado. (The taxi charges too much.)

Mi sueño es viajar en limusina. (My dream is to travel by limousine.)

Mi abuela me cuenta historias de sus viajes en caballo hasta la hacienda. (My grandmother tells me stories of her trips on horseback to the hacienda.

Me encanta salir al parque en bicicleta. (I love going to the park on my bike.)

¡Me encantaría montar un monociclo! (I would love to ride a unicycle!)

El helicóptero está por llegar. (The helicopter is about to arrive.)

Navegué en un barco en una playa cerca de Madrid. (I sailed on a boat on a beach near Madrid.)

¿Dónde hay lanchas para cruzar el río? (Where are there boats to cross the river?)

Construimos una barcaza, pero se destruyó antes de salir de la tierra. (We built a barge, but it was destroyed before we left the land.)

Durante mi viaje pude observar la estatua de la libertad desde el ferry. (During my trip I was able to see the Statue of Liberty from the ferry.)

¡Me da miedo subirme a la moto de agua! (I'm afraid to get on the jet ski!)

Depending on your destination, you will find a variety of vehicles that may surprise you with how unique they look. Like the bus from the Netherlands that can also navigate on the water!

In a Spanish-speaking country, you can also find unique means of transportation you will use to get around and have a unique cultural experience during your trip.

This traditional Ecuadorian and Colombian transportation can be considered entertainment for locals and tourists. A Chiva is a kind of bus with no windows in which people are standing while listening to music and dancing as if it were a disco. It is also used for sightseeing.

The best part is that their designs are extravagant and generally have cultural connotations of the place. It is a super fun ride!

In addition, there is also the Chiva Express, another Andean vehicle very similar to the conventional Chiva, but with the difference that it runs on rails. That is to say, it has the shape of a bus with extravagant designs like the Chiva, but it goes like a train. In addition, this one does have windows, and the routes are long.

It is used as a means of tourism, passing through impressive sites in the Andes of Ecuador until reaching the coast.

In the previous Spanish transportation vocabulary, you learned that the taxi is also called the same. But, depending on the type, different words are added to the term, like in 'coconut taxi.'

Coco means 'coconut,' a name given to this unusual vehicle because of its concave, coconut-like shape. It is a moto-taxi famous in Havana, Cuba, and well-known among locals and tourists.

On the other hand, it should be noted that in several Latin American countries, there are also vehicles similar to Thailand's Tuk-Tuk. A scooter with a roof on which some passengers sit in the back. For example, they are widespread in the coastal region of my country.

In various countries of the world, people still turn to certain animals as transportation. For example, in Malaga, Spain, there is the so-called donkey taxi. Just as its name suggests, you pay to get on the donkey (burro) and be taken to your destination, just like a taxi car would do.

This type of transport has been around since the 60s when locals used donkeys to get around. It was such a curious sight for tourists that they started to ask for photos with the donkeys. Or even asked the owner to let them have a ride in exchange for a tip. It gave the locals a great idea to start a donkey taxi business, mainly targeting tourists.

Practice using this Spanish vocabulary by reading each example sentence! If you already have enough vocabulary to form sentences, make your own to practice even more.

And if you are still having difficulty making sentences, Ling App is here to help you make your next step towards Spanish fluency.

Start learning the Spanish language with 50 entertaining lessons that will teach you everything you need to know, from grammar to everyday vocabulary. You will be able to practice conversations with the chatbot and sharpen your ear while listening to the Spanish pronunciation of native speakers. Ling will make you feel like you are playing because learning languages can be fun too!

You can also visit our blog to learn more about musical instruments in Spanish, how to introduce yourself, and how to say you're welcome. There are so many topics to discover that it would undoubtedly be a good idea to start today.

So don't wait any longer and download Ling to try the first lessons for yourself. You'll love it!