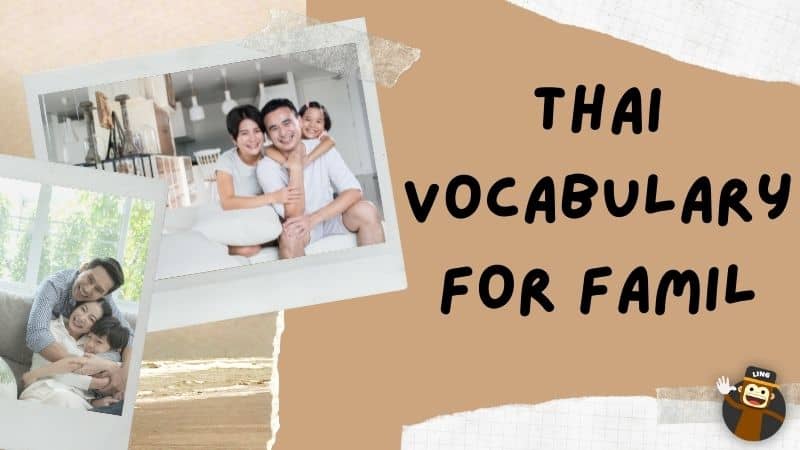 In Thailand, it is not unusual for extended families to all live together in one house. They say that, if you marry a Thai, you also marry their whole family. While this might seem strange for some, it actually works out quite well. When parents need to go to work, they can leave their child with their grandparents, so there is no need for a babysitter. There is always someone on hand to take care of chores, make the food, and everything like that. No one would get lonely, that is for sure.

I thought that today we could look at some vocabulary relating to family or ‘khrawp krua’ (ครอบครัว) as it is known in Thai. Think of it as an extension of introducing yourself – family values are strong in Thailand so people are likely to ask about them. Prepare yourself with this Thai vocabulary for family.

How To Say Mother And Father In Thai

Let’s start off with talking about parents. They are the head of the household and their children are expected to take care of them as they get old. It is not uncommon for those who move out of their village to the cities to send money to their parents every month. The point is, that there is a lot of respect for parents in Thai culture.

When addressing parents, you can use the word ‘mae’ (แม่) for mother/mom, and the word ‘phaw’ (พ่อ) for father/dad. Then, you should also know the words for addressing the in-laws too, especially as you will be spending a lot of time with them. There are different names given based on whether they are the parents of the husband or the wife.

For those interested, these would literally translate as ‘father wife’ and ‘mother wife’ etc. where ‘saa mii’ (สามี) means husband and ‘pan ra yaa’ (ภรรยา) means wife. That works out well, as there are fewer words to learn overall.

Starting with the father’s side, we have the Thai word for grandma, which is ‘yaa’ (ย่า). Grandpa in Thai is ‘bpuu’ (ปู่). On the mother’s side, you would use ‘yaai’ (ยาย) and ‘dtaa’ (ตา) for grandma and grandpa respectively.

What To Call Your Siblings

Now is the time to take a look at brothers and sisters. In this case, the Thai language differentiates between younger and older siblings, unfortunately meaning more words to learn. As a way to denote the age of siblings, the terms ‘pii’ (พี่) meaning elder and ‘noong’ (น้อง) meaning younger are used.

Hopefully, now you know how to address your mother, father, grandparents, and siblings in Thai. You can use this knowledge when talking with them or talking about them with others which are perfect for making new friends or, in the case of a relationship, talking to your partner’s family. Whatever the reason, it is always a good idea to expand your vocabulary with new words and phrases and keep testing yourself with the Thai language.

Another great way you can test your language skills is with the Ling Thai app. Boost your ability to read, write and speak by using the app for just a few minutes every day.