Incredible 18+ Thai Homonyms That Are Fun To Learn 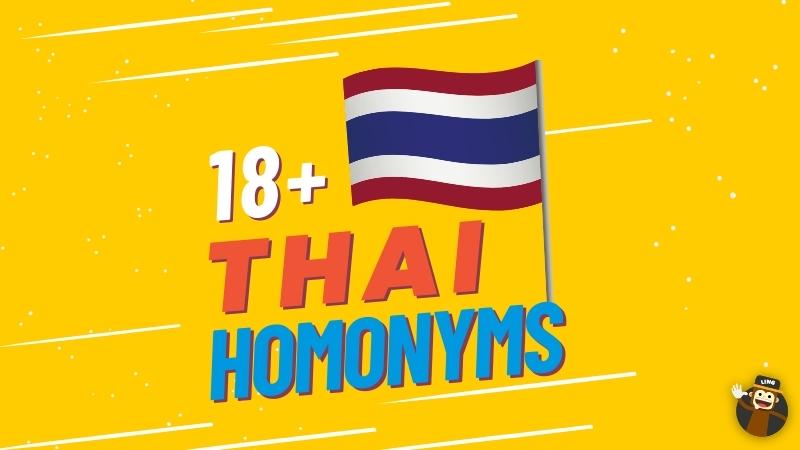 When learning Thai, how often do you feel confident in a word you learned from a local, only to find out it meant something entirely different? If this has happened to you often enough that studying Thai seems like a hopeless struggle, take a deep breath; you may simply need to brush up on your knowledge of Thai homonyms.

Many languages have homonyms, and it's up to the language learners to memorize them and use context clues to determine the correct word. Some examples of English homophones include the words to and two, or another one is sight and site. When learning Thai, it's a good idea to practice Thai spelling words and Thai grammar to get a sense of how fantastical some Thai words can seem. There're lots of words that sound the same yet have various spellings and meanings. If you take the time to study Thai homonyms now, you can end your problem tomorrow.

What Are Thai Homonyms?

Homonyms present a unique linguistic obstacle for Thai learners, in addition to the Thai vowel sounds. Similar to English, Thai has homophones and homographs. Homophones are lexical items that share the same pronunciation but are spelled and interpreted differently. However, homographs are words that seem alike in writing but are pronounced differently and have different meanings. Yet, homographs can also have the same or similar spelling but different pronunciations. Let's take a case-by-case look at this before we make things more confusing for you.

In Thai culture, people like playing this joke on others and find it amusing to throw off the person's trying to determine the specific time at which they were stung by a bee. Because instead of เพิ่ง (pə̂əng), which means just now; Thais often pronounce it as พึ่ง (pʉ̂ng), which sounds similar to ผึ้ง (pʉ̂ng), means a bee. Example frustrated conversation would be as follows;

Let's discuss some Thai homographs then, words that look identical in writing but have different meanings. On the other hand, as we discussed at the beginning of this article, there are two major types.

So, let's see a few examples to understand this better.

After reading all these sample Thai homonyms, you should be more confident and energized. Because the more you are familiar with this vocabulary, the more you can successfully catch up with what locals say and interpret the situation correctly. The most helpful tip for comprehending Thai homonyms is to read or listen to the whole sentence. When you don't know what individuals are trying to express, you should evaluate their entire sentences or don't be afraid to ask them to clarify that single word for you. So you'll grasp the language better and allow you to keep learning new words daily. So we hope that Thai homonyms will not overwhelm you; in contrast, they make you want to challenge yourself to study more Thai homonyms.

Learning the language is your best bet for having an enjoyable and enriching experience during your time in Thailand. Therefore, it's highly recommended that you use your thumbs-up gesture to download the Ling App to your mobile device. If you do this, you can be confident that you will never be without the world's best language-learning application. We also make it easy to access our massive resources, such as lists of Thai words organized by topic and audio recordings of Thai conversations performed by local speakers to help you learn the natural pronunciations.

Because we understand that learning a new language should be fun, we've included mini-games and quizzes that are both enjoyable and useful for memorizing key Thai words and phrases.

Are you ready to start now? So download the Ling App from the Google PlayStore and Apple AppStore now, and prepare to be fluent in Thai very soon!