5+ Ways To Say I Love You In Malay 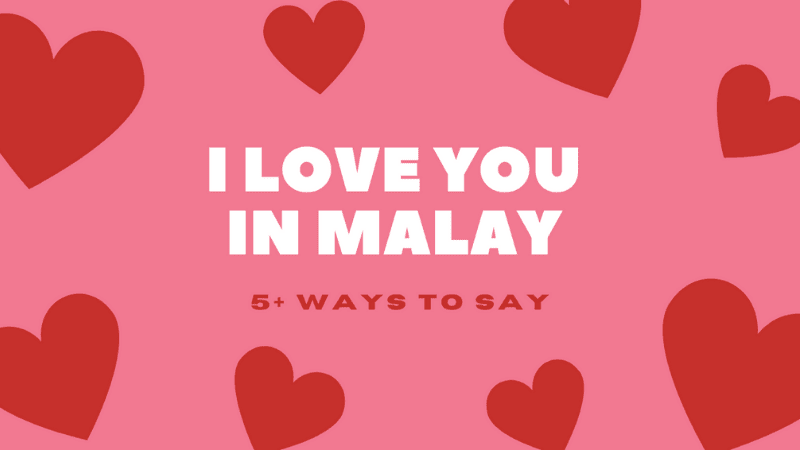 Love phrases are some of the unique aspects of a language, and important too (especially if you plan to be in love!). In today's sharing, you'll see and understand some new words and expressions that Malaysians use to express and convey their love to lovers, friends, and family members. Let's start learning how to say I love you in Malay

I Love You In Malay And Other Common Malay Love Phrases

In Malaysia, there are so many ways that the locals use to express and articulate their feelings. Today, our main focus is to see, know, and acquire the common words and expressions used to profess one's feelings to another in the Malaysian language, both spoken and written context.

In the Malay language, there are a few basic expressions that are used in both written and spoken contexts in conveying one's love. Here are some of the most typical Malay phrases that a Malaysian uses when expressing fondness and a sense of endearment to someone:

If you happen to fancy someone from Malaysia and you want to translate your feelings to the lucky person in their native language, this is how you should say and spell 'I like you' in Malay:

In Malay, you use saya suka awak to tell a person that you like him/her. The word suka literally means like if it's translated Malay-English. So, it's quite straightforward and easy. But then, if you want to tell someone that you love them, you should say these phrases instead:

Saya sayang awak and saya cintakan awak are two of the ways to say I love you in Malay. To compare, the word sayang connotes the feeling of intense attachment, infatuation, and affection while the word cinta refers to one's intense feeling of deep affection. Most of the time, in the Malay language, both phrases are used interchangeably because they essentially carry the same meaning. But some people may see it differently - the word cinta may be regarded as more powerful in terms of its meaning than the word sayang.

Plus, if you hit Google and look for how to say I love you in Malay, you might question why the words are slightly different - why is it saya cintakan awak, instead of just saya cinta awak?

Great question! - the answer is because you are being taught how to speak like a native Malay speaker! In spoken Malay, kan serves as a suffix - it is included to signify the current action of loving. By saying saya cintakan awak, it gives a kind of impression that you love (and are really loving) that person!

Also, for your information, none of the Malay locals actually say saya cinta awak. It's a phrase that only foreign speakers or tourist use. It sounds a bit too standard, too formal - and that is not how the Malay spoken language works. The Malaysians use Bahasa colloquially, so if you want to speak like a true local and impress your loved ones, go ahead and say saya cintakan awak!

Congratulations! You have now learned how to say I love you in Malay!

As you love someone, you can never run away from the feeling of missing a person - especially if the people you love are physically distant from you. You can translate that feeling of need for someone by including the word rindu. In the Malay language, the word rindu literally means miss. So, in the Malay spoken context, you can tell them that you miss them by saying:

Naturally, when a person tells "I miss you," one would often feel appreciated and supported. Words like saya rindu awak can definitely please a person and enhance the adoration between the two people.

How Do I Reply I Love You And I Miss You In Malay?

Since you have comprehended the words used for expressing love, now is the perfect time to know what to reply (in case you're lucky and someone says saya rindu awak!)

Similar to English, you either answer 'I miss you too' or 'I love you too' in Bahasa. This table shows you how you should reply to some of the love phrases.

Simply put, to support and return one's confession of love, you can use words such as jugak (/ʤugʌk/) and pon (/poʊn/), which means also/as well/too. So, to translate the meaning,

Saya pon rindukan awak = I miss you too

Literally, the word jugak and pon is identical in their meaning but the way you use them is different. Commonly, the word jugak is placed in the final part of a sentence. Pon, on the other hand, is put in the earlier part of the phrase, right after the subject (saya). Both words can be used interchangeably because they carry the exact same meaning.

One important disclaimer - something that needs to be remembered is the replies provided are entirely colloquial. If your confessions of love take place in a highly formal setting, the usage of the word pon is not an option because that particular word only exists in an informal, casual context. So, how do we reply to love phrases in a formal spoken Bahasa context? You answer by using the word jugak but the 'k' sound needs to be dropped, juga.

If you are still wondering how are these phrases articulated in a day-to-day context, here are a few examples:

Sometimes, the locals just answer saya pon (me too) in responding to some of the love phrases (because it's shorter and easier). The words also retain the same exact intended meaning. These phrases can always be used when in a text, email, or even letters to your loved ones! In a way, it is not restricted to only the Malay spoken context.

Knowing how to convey your emotions and express love in Bahasa Malaysia is significant especially if your lover or future spouse is a native Malay. Saying love phrases in their native tongue will not only make them appreciate you and see your efforts in showing support for their first language - but it could also be the reason for your blooming relationship!

Learn other Malay basic phrases and expressions. The Ling App from Simya Solutions can definitely help you acquire the most important words and key phrases in Malay – it has the best, interactive features that will get you speaking Malay in no time!