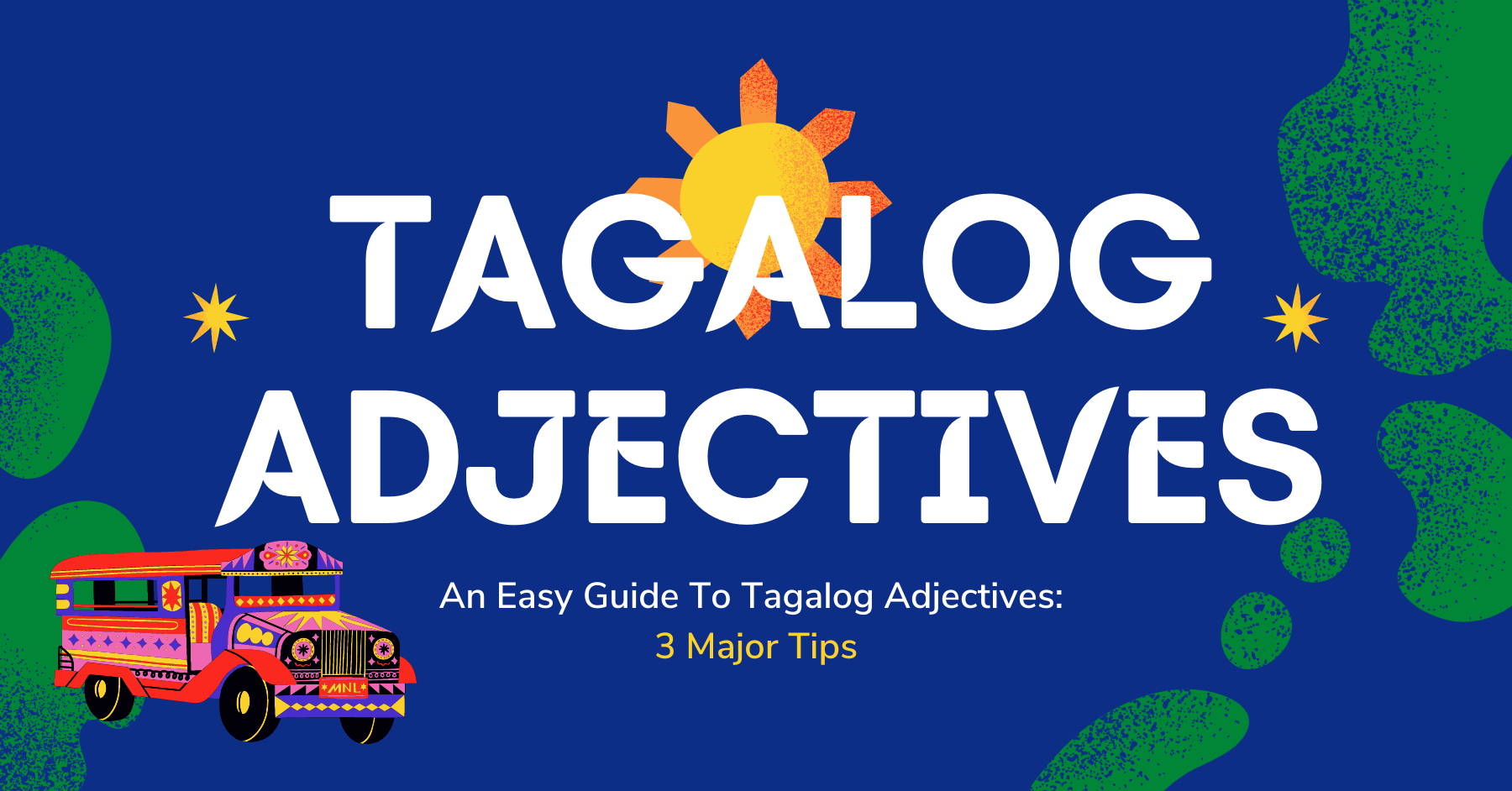 Wondering how pang-uri or Tagalog adjectives work as compared to their English counterparts? In today's content, we will walk you through the critical points to remember about this grammatical lesson and walk you through the most commonly used adjectives to describe people, places, and things. We believe that it is essential for you to master this since it is one of the first words you'll ever have to learn when learning a totally new language. Ready for the challenge? Let's get learning!

Same as in English, there are also nine major parts of speech in the Tagalog grammar, including nouns (pangalan), verbs (pandiwa), adverbs (pang-abay), pronouns (panghalip), prepositions (pang-ukol), conjunctions (pangatnig), particles (ingklitik), adjectives (pang-uri), and ligatures (pang-angkop). If you are just starting to master this, we highly recommend that you start by mastering adjectives in order to express your thoughts and describe an object or a feeling.

This is particularly important too if you want to give compliments. You can use adjectives to modify or describe a quality like the examples below:

To help you get started on how the adjectives work in Tagalog grammar, continue reading below.

Tagalog adjectives can take many forms, and this is something that you have to get used to. At times, it can be used to describe nouns and pronouns, but you can use it as an adverb or as a replacement for a noun or predicate. Take the case of the example sentences below:

There are four adjective forms to follow, and this includes the simple (payak), affixed (maylapi), repeating (inuulit), and compound (tambalan). Thankfully, differentiating the four is pretty easy! Below are the examples:

Degree Of Comparison In Tagalog Adjectives

Tagalog grammar is heavily based on English adjectives which is why you can also expect three degrees of comparison here, such as the positive (lantay), comparative (pahambing), and superlative (pasukdol). The comparative degree also has two major types known as similar (magkatulad) and sisimilar (di-magkatulad), which compare two nouns or pronouns. If the comparative form is dissimilar, you may use palamang (to show supremacy over the other thing compared to) or pasahol (to show a lack of supremacy).

Below is an example of how it works:

3 Tips To Remember About Tagalog Adjectives

Learning Tagalog languages is not as easy as it looks. However, it is not entirely impossible not to master it on your own. Here are a few tips which can help you out in remembering the Tagalog Adjectives.

Tip #1: Remember that the basic Tagalog word form for adjectives uses "ma" as a prefix

Tip #3: Tagalog adjectives can differ based on the number of what is being described

Interested to learn more about the most common adjectives used by Filipinos? We have compiled here and listed below all the commonly used words that you can try out when describing or modifying a statement. Most of these can be used for all the forms that we have discussed early on, so be sure to review the explanations above before using them.

On the search for language learning tools?

Out with the old, and in with the new! Instead of using plain-old materials for learning the Tagalog language, you can widen your vocabulary and learn about the critical grammar points just by using free language learning applications like the Ling App of Simya Solutions. This mobile app offers high-quality lesson content that will show and guide you on the proper ways to use, say, translate, and pronounce words, expressions, slang, and phrases.

The best part? It can be accessed via the website or even downloaded to small devices so that you can take your learning on the go. From the inside, you will get help for other 60+ languages and be assured that real professionals and native speakers update every lesson. Ready to take it on for a spin? Download using PlayStore or AppStore today!