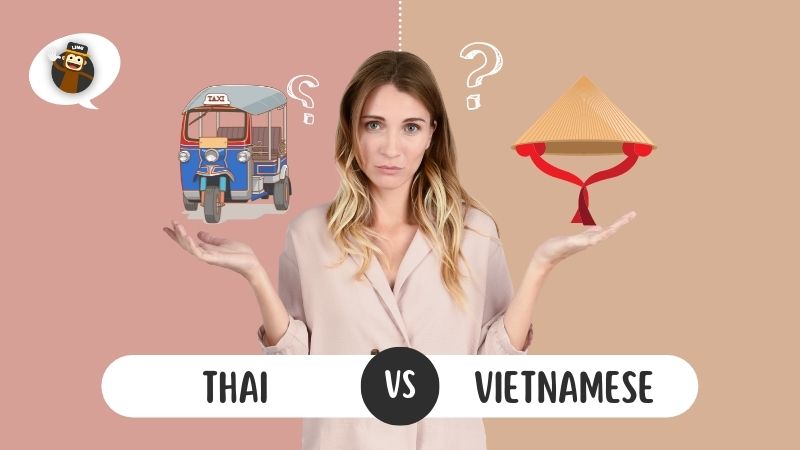 Today we’re looking at Thai vs. Vietnamese and considering how similar they are. To save some of the suspense, though, let me say that linguistically speaking, the languages are not similar because they belong to different language families. Thai belongs to the Tai language family, and Vietnamese belongs to Mon-Khmer.

Whether you’re learning Thai or Vietnamese, Ling is perfect for you. Native speakers design Ling’s courses, so you’re guaranteed the real deal.

Another useful feature is that you can cycle between different languages. You could study Thai and Vietnamese on the same day if you wanted to! What’s more, is that if you’re a native Thai speaker, you could use Thai as your L1 to study Vietnamese as your L2.

What Are The Similarities Between Thai And Vietnamese?

Another thing to consider is that both languages have changed a lot. Old Vietnamese didn’t have many of the features it has today until it came in contact with Thai. This happened in numerous different ways, particularly in Southern China, where Thai and Chinese met, and the result filtered down to Vietnam. This is an ongoing process, and both languages are constantly in flux.

What Is The Biggest Difference Between Thai And Vietnamese?

That question is easy to answer. It has to be the script. The first time you look at Thai writing (akson thai), it barely even looks real! Whereas Vietnamese uses a version of the Latin alphabet.

What Are The Similarities Between Thai And Vietnamese Cuisines?

Similarities include the ingredients used in food such as rice, noodles, chili, soy sauce, fish sauce, peanuts, and ginger.

The common wisdom among chefs is that cooking Thai food is more complicated because they have more ingredients and a more complex base. Thai dishes often use coconut milk too.

In terms of methods of the cooking process, both cultures like to stir-fry and deep-fry food; however, the Vietnamese do a lot more boiling and steaming.

It’s also important to consider the French influence on the Vietnamese. The Banh Mi took its influence from French cuisine.

My experience with Vietnamese and Thai food is that Vietnamese cuisine might be preferable for someone who prefers more of a Chinese vibe, whereas Thai cuisine is more Indian.

Some famous Thai dishes include:

Some famous Vietnamese dishes include:

Whether you prefer Vietnamese cooking or Thai cooking, you’re in for a sure-fire treat. However, a word of warning, if you’ve never been to southeast Asia, give your stomach some time to acclimatize. It is very tempting to eat street food(particularly in Thailand), but my experience is that if you pay a little extra, you get the same food but in a setting where the food has been properly washed, etc.

What Are the Similarities Between Thai And Vietnamese Culture?

Comparing something like Vietnamese and Thai foods is easy compared to comparing entire cultures.

This is an extremely difficult question to answer because of its complexity. It is difficult to reduce entire cultures to just a few variables. However, I’ve lived in both countries at different points for a number of years, so perhaps I can at least attempt to comment on differences and similarities.

Generally speaking, I find the people of both cultures to be much less aggressive and more respectful than any western country. Again, we are all prisoners of our own experiences, and as a (relatively) young white man, I find that men and women from both countries are shy when it comes to talking to me. Perhaps you could put that down to a language barrier, but even in English classrooms where students have an excellent grasp of the language, they still remain deferential and are very rarely cheeky (impossible to imagine if you’ve been in an English classroom).

Politically speaking, the countries are different. You can’t engage in a political debate with a Vietnamese person. Protesting is outright outlawed. In Thailand, political debate is everywhere. Be very careful about bringing the royal family into a conversation, though.

In terms of the general mood of people, for me, Vietnam seems a lot more optimistic about the future. Perhaps this is due to both countries’ economic and political situations, or perhaps it’s because Thailand was westernized much earlier. Speaking to young Thai people, there is much more of a sense of nihilism and cynicism. In Vietnam, there is a feeling that the country is moving in the right direction.

And there are also a few little odd curios to consider, like why the tuk-tuk is so famous in Thailand, yet I’ve never seen one in Thailand. If you’d come to Vietnam in the ’70s and ’80s, you would have seen a lot more; however, the government banned them completely in 2008. In Vietnam, the motorbike is king, and long may it reign!

Learn Thai (And Vietnamese) With Ling

Ultimately there are no winners in this Thai vs. Vietnamese language battle. Both languages are unique and beautiful.

Ling is the place to learn a lesser-spoken foreign language!

We have everything you’ve come to expect from the very best language learning apps, including flashcards, native audio recordings, and fun mini quizzes and games.

We also have a super popular Thai and Vietnamese blog.

Until the next time,