The Truth About The #1 Closest Language To Thai 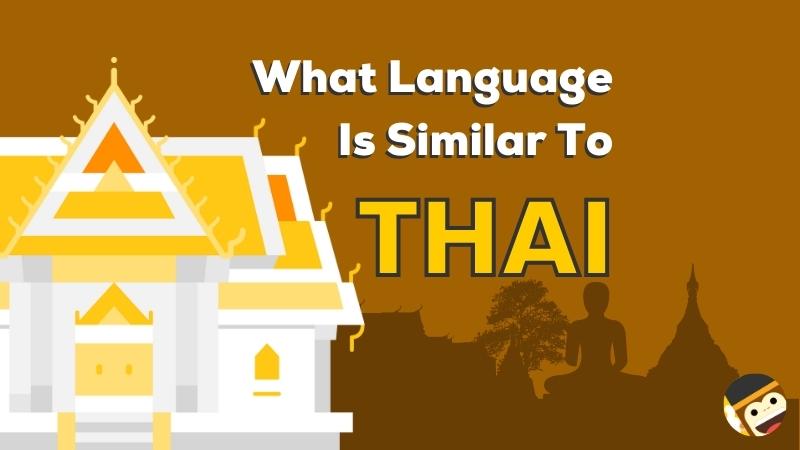 Can't wait to visit or เยี่ยมเยียน (pronounced as yîamyian) Thailand? We cannot blame you since the country is filled with incredible people and off-the-radar tourist spots in secluded provinces. If you are interested in connecting much deeper with the locals during your travel, we highly recommend that you surprise them with your knowledge of the Thai language. Fortunately, it is easy to learn, especially if you know the closest language to Thai. Ready to find out what this is? Keep reading below!

What Is The Closest Language To Thai?

Are you a first-time traveler to Thailand? If you are, then hats off to you since you have chosen one of the best countries in Asia to visit! From jaw-dropping temples to mystical islands, the country has so much to offer foreigners across the globe. To make your travel hassle-free, we highly recommend that you learn the Thai language too, as it can help you appreciate the country better and make lasting bonds with the locals. To do this, let's first learn the closest language to Thai.

Thailand has its border close to many countries, such as Myanmar, Cambodia, Malaysia, and Laos. Many tourists love to take a long backpacking trip in Southeast Asia by crossing the border from Thailand to Laos, then from Laos to Vietnam or Cambodia. Interestingly, they will soon notice the similarity of some vocabulary used between Thai and its neighbors. And most of you can guess that Lao is most similar to Thai. Yes, we could not agree more. But before we jump into more detail, let's get to know more about Thai dialects together.

The Thai Language Has 4 Dialects

Of course, Thai people speak the Thai language. In any case, Thai learners may sometimes get frustrated because Thai is one of the tonal languages. Though there are also four significant dialects in Thailand, you should keep them in mind. They are not only using different tones but also different words that are other definitions, and it sounds like foreign languages. So we cannot conclude that Thai and Lao languages are entirely identical, while Thai people speak differently depending on where they come from.

If you are currently learning Thai, this is an official language. So it is widely spoken by the rest of the country.

Have you been to Phuket or anywhere in the southern area? If so, you must realize that southern Thais speak extremely fast and love to shorten words. And they have their own words, and even simple daily life vocabulary differs from the central area.

For example, in the central area, 'how are you?' is เป็นอย่างไร [bpen à yâang rai]. In the southern region, พันพรือ [pan prʉʉ] is 'how are you?'. Looking closely, you can see that the language structure, vocabulary, and even grammar are unlike central Thai.

Most Thais agree that northern Thais speak slower and softer than other areas. They also have their own words, like southern Thais.

For example, in the central area, speak is พูด [pûut]. In the northern region, อู้ [ûu] is speak. So you can see it is totally different.

So here, it is time to talk about the Thai dialect closest to the Lao language. Thai-Isan people say there are only slight differences between these two languages. However, the Lao language is not only similar to the Isan language but also shares many similar words with northern Thai.

For example, in the central area, dinner is ข้าวเย็น [kâao yen]. On the other hand, in northern, northeastern, and Laos, people say ข้าวแลง [kâao lɛɛng]. In this case, Lao differs from standard Thai. However, it shares a similar word with the same meaning and pronunciation as the other two areas in Thailand.

Brief History Between Thailand And Laos

Let's travel back to the past.

Thai and Lao languages are categorized in the Tai language family. Examples of languages included in the Tai language family are Thai, Lao, Myanmar's Shan language, and Zhuang (Southern Chinese). Before Thais declared themselves "Thai," the whole country used to be autonomous, such as Ayutthaya, Thonburi, and Lanna. During that period of time, ancients frequently moved around whether for food or war escape. At that time, the Ayutthaya people told the French King's envoy that their ancestor was Thai Noi, which means Lao people.

From there, it is unsurprising to know Thai and Laos people started sharing a language over 1,000 years ago. Generally, people learn how to speak before practicing writing systems. So indigenous languages had brought people together before they created the national language. Even in ancient Thai literature, the Lao language is also mentioned. And we want to show you modern Thai and Lao alphabets that look similar in writing methods. Imagine you are learning these two languages simultaneously and being able to guess it all correctly. Sounds fun!

Examples Of Thai And Lao Words

Words With Same Meanings And Pronunciation

Words Pronounced The Same But With Different Meanings

Is Thai Similar To Any Other Asian Languages?

Some languages must change the form of words to define time, past, present, and perfect tenses. English and Japanese are examples of languages that need to change their word form. At the same time, Thai and Chinese grammar share similar sentence construction patterns, and it is unnecessary to change the word form. Instead, they add one or more words to indicate the time.

Apart from sharing the same grammatical rules, there is plenty of word borrowing. In this case, the Thai language borrows Chinese-Hokkien and Chinese-Teochew, such as เก้าอี้ [gâo îi] chair, ซีอิ้ว [sii îu] soy sauce, and เจ๊ง [jéng] fail or go bankrupt.

In Myanmar, there are many autonomous areas where they speak their own languages, such as Burmese (official language), Mon language, Hmong language, and Shan language. Those languages are classified in the same language family, the Tai languages. As we mentioned earlier about the Tai language family, the Shan language is spoken by groups of people in several areas, such as Northern Myanmar, Northern Thailand, and Southern China. So it works the same way as Thai-Isan and Lao languages.

Surprisingly, uncountable languages are shared among Southeast Asia and other Asian countries. However, it would help if you were careful when using the same words since they may have different meanings. In this case, you can learn more about their background, geography, and history, so you will realize how cultural differences can be blent together under language families. Learning both majority and minority languages is beneficial even though they are spoken in a specific part of the country. Because the more we know about local languages, the more we understand their culture.

If you are the one whose schedule is out of control but willing to boost your Thai language skills, I suggest you study Thai online. The Ling App is the perfect mobile application to help you learn Thai more efficiently. So no matter how busy you are, you swipe your phone and jump into the Ling App. A ton of knowledge is awaiting, such as language lessons, grammar tips, hundreds of dialogues to practice, and mini-games that will surely boost your Thai skills faster.

This is the most fun language learning app that is convenient and will pave your road to success! So, what are you waiting for? Download it today!