Ever heard of the Swahili language? If setting foot on the lands of Africa has been on your wish list, you must’ve heard of this language somewhere. Like Malay and English languages, Swahili is one of the easiest African languages to learn, especially if you speak English. It’s OK if you haven’t heard of the language because today, we’ll look at the common Swahili phrases and words you must know.

Swahili is the native tongue of the Swahili people. The Swahili people (also known as Waswahili) are a Bantu ethnic group who inhabits the lands of East Africa. The Swahili language is originally known as Swahili and it’s the national language in Kenya, Uganda, and Tanzania. As mentioned before, it’s one of the easiest African languages to learn and acquire as the pronunciation of Swahili words sounds exactly as how it is spelled out. Let’s not waste time and learn how to speak Swahili.

What Are The Basic Swahili Words And Phrases

How do we greet a person in Swahili? What are the common Swahili phrases beginners and travelers need to know? How do we respond to Asante Sana (thank you very much)? Keep reading if you want to find out all the answers and discover the basic Swahili phrases.

Let see how to use each word/phrase:

Hujambo in Swahili means hello. It’s the basic word in Swahili greetings. It’s used to greet one person – it’s the singular version of hello in Swahili. If you’re greeting more than one person, use Hamjambo instead, as it’s the plural form of Hujambo.

Habari gain means how are you in Kiswahili. Sometimes, it’s shortened to habari. Yet, if you’re greeting the elderly, use Habari Yako instead. The greeting bears a sense of formality and respect, which is more suitable to be addressed to the elderly. So, if you’re looking for a way of asking how are you, these are the useful Swahili phrases and words you must know.

This is how the Swahili people often greet each other, anywhere. It’s the English equivalent of ‘How are you doing‘ or ‘how is it going?

If you’ve been to the land of East Africa, you’d probably know how people say Mambo vipi? when greeting each other on the street – it’s the lingo in Swahili greetings, most commonly used in Swahili spoken context.

The Swahili community also uses Unakuwaje? to ask “How are you?” – it’s a useful phrase that the locals use.

How to respond to habari? By saying Sijambo, as it means the English equivalent I’m fine. A synonym of Sijambo is nzuri, which exactly means the same. 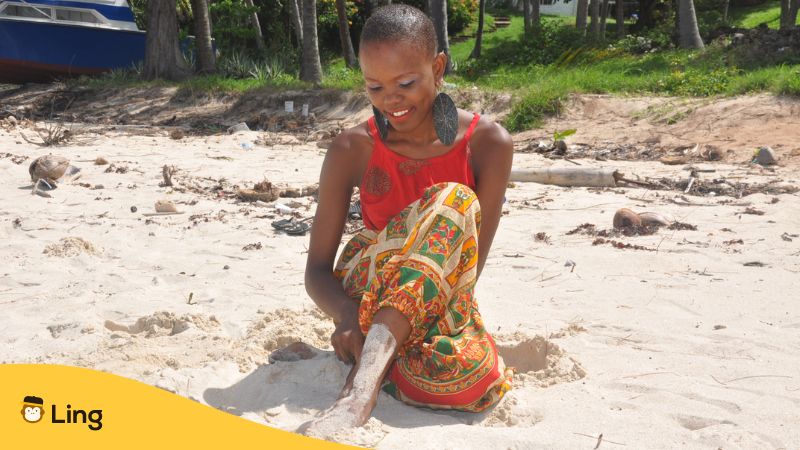 This particular phrase is the one you must know – it’s the most basic and useful phrase in Kiswahili vocabulary. If you want to find a way of asking a person’s name; jina lako nani?

So what do we answer if a person greets and asks us what’s your name? You say jina langu ni + your name in return.

When greeting someone, and you would like to know where they are from, you can ask unatoka wapi, which means where are you from, in English.

To answer the previous question, you can say Natokea + place, which translates to I’m from in English.

Yes, this is the most fundamental phrase you must learn in Swahili – how to say thank you. Going to a foreign land will be a memorable experience if you have a pleasant time. And to get that, it’s best for us to be as polite and respectful to the native as possible. What’s the simple magic word? Asante – thank you!

If you want to show gratitude to a lot of people, the right phrase to use is asanteni, which is the plural version of the singular thank you, asante. If you want to emphasize your appreciation, you can use an alternative phrase; asante sana! This is a useful Swahili phrase – it means thank you very much!

If a person offers something to you, but you don’t really want his/her offer, you can decline by saying no thank you; hapana asante.

After meeting someone new, you might want to say “it’s nice to meet you“, just to appear friendly and elevate the mood. In Swahili, it’s nafurahi kukuona!

Now, let’s learn what are the phrases and words for parting. In the Swahili language, goodbye is known as kwa heri. If you’re saying goodbye to two or more persons, say kwa herini (plural form).

After meeting up with a friend, you can see this phrase if you’ll be seeing that person again. This is also a part of Swahili greetings – it’s used when people want to part ways. Like English, this word is often said right before saying goodbye.

In Swahili, the word for yes – ndiyo. If you want to respond yes to someone, this is the way of doing it.

In contrast t the previous Swahili word, if you want to disagree and say the English equivalent no, you may say no; hapana.

In East Africa, the more Kiswahili vocabulary you know, the better. Here are a few more useful Swahili words you need to. 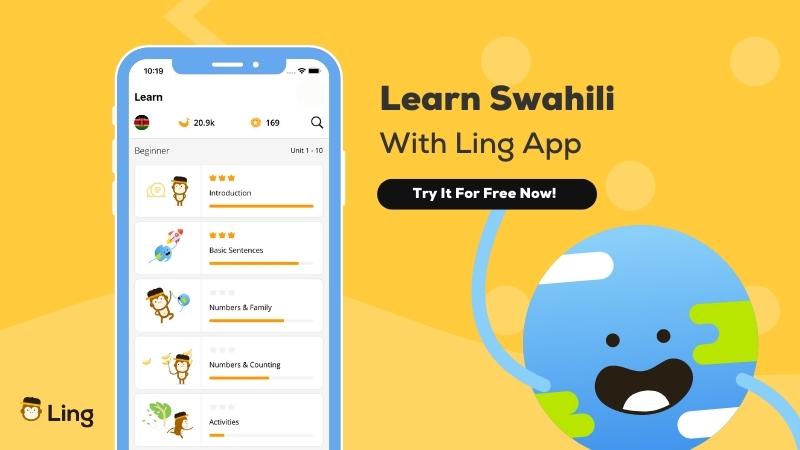 As mentioned before, Swahili is the language used by many East African communities. If you want to speak Swahili and sound like a native, you can! Take your time learning the language in the Ling app. Out of a million people, you may be among the ones to speak Swahili like a pro. Install Ling App and take a tour around the mobile app – you’ll see how Ling can help you master everything from scratch. Ling App has a full collection of Swahili words, useful phrases, vocabulary, grammar and so much more!