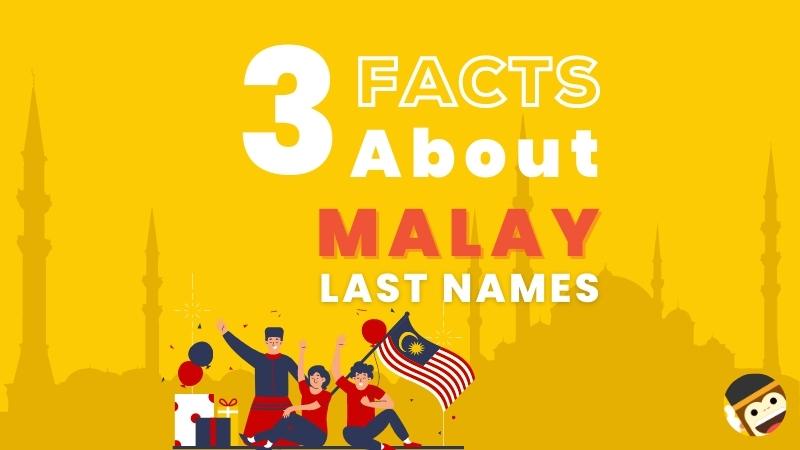 Do you know that almost 300 million people speak the Malay language (Basaha Melayu)? With such an incredible number, you can imagine how influential Malay is. In fact, the language itself can be reflected through the typical Malay last names. Yep, you read that right! Contrary to common belief, names actually have the capacity to reflect a person's cultural and linguistic identity. Ready to learn more? Keep reading below!

Names are magical because they offer you a lot of information about one's origin, culture, beliefs, and nationality. For instance, some cultures place last names at the start of their full name, while others place them at the end. In addition, some names can be ridiculously long or highly influenced by their religion, while countries like China may even have one-word names!

Want to know if someone is from Malaysia? Well, you are in luck because that is what we will cover today. If you are ready for that, let's get started!

Who Are The Malay People?

If you thought Malay (Melayu) and Malaysian are the same, it's not a hundred percent correct. The term Malaysian actually refers to the whole population in the country. On the other hand, Malay represents an ethnic group in Malaysia. From this part, Malay seems diverse, which motivates us to discover more about Malay people.

Malaysia is one of the countries that have various ethnic groups and cultures. However, more than half of the total population are Malays. Among Malays, there are also Malaysian Chinese, Malaysian Indians, and other groups. At the same time, while the country has cultural diversity, its constitutional court announced Islam as Malaysia's official religion. However, Malaysians who are not Muslim are still free to practice and follow different faiths.

Due to the religious beliefs and the influence of the Arabic language in their society, many of the locals say that Arabic and Islam remarkably shaped the Malay naming conventions. Let's find out more about that below!

There are so common names in Malaysia. In fact, you probably have heard of names such as Ahmed, Muhammad, Abdul, Farah, and Hafiz. Most of the aforesaid first names are influenced by the Arabic language. Far before Malays carried Arabic names, there was also a mix of Malay, Thai, Sanskrit, and other names that you can find within the country. So apart from religious relations, traditional Malay names are impacted by other languages.

The 3 Facts About Malay Last Names

1. Malays Do Not Have Family Names

Malay families do not have last names, unlike other sides or countries. On the other hand, their name is followed by their father's personal name. So their naming convention structure will be [given name + the title + father's given name]. Some examples are;

Let's clarify the first one only, so Ahmed is a given name. The title bin means 'the son of,' followed by their father's name. Then it means Ahmed, the son of Ibrahim.

So the daughter is called Aisyah, followed by the title binti. So now you can translate the whole as Aisyah, the daughter of Musa.

These two titles are the most commonly used. At the same time, some Malay families use terms like 'anak lelaki,' which means "the son of," and 'anak perempuan,' which represents "the daughter of."

3. Malay Married Women Will Not Take Her Husband's Name

Commonly, women change their last names to their husbands at marriage. So, from the above truth, you probably thought a Malay daughter's name would follow her future husband when they marry. But, actually not, a Malay married woman will not take her husband's given name but remain using her father's personal name.

Some Malays Do Carry Family Name

A few Malay families carry family names, such as Abang, Che, Raja, Meget, Raden, Tengku, Nik, Wan, etc. However, they put it in front of their names, similar to the Chinese naming convention. And nowadays, if a Malay woman marries a Western man, she can carry her husband's surname and put it after her given name—this is the same for Malays who have a foreign father.

Simple as it may be, names are so interesting since they tell us much about a person. In addition, some names may sound alike, but there is certainly a reason why they are named as such. Whether the name is based on religious beliefs, culture, or foreign-sounding, it is crucial that we show respect towards every name.

Are you seeking the most helpful way to be fluent in Malay rapidly? So you have come to the right place! The Ling App is our most recommended resource as it offers a broad range of language learning features and lessons, from easy Malay words to more advanced levels. While learning Malay may not be easy, it will open up many new opportunities. You won't only be able to communicate with Malay people from Malaysia but also Indonesia, Singapore, and Brunei.

Does that sound exciting? So stop procrastinating, and let's set your language learning schedule. Download the Ling App from the Google PlayStore and Apple AppStore now and prepare to speak Malay like a local!