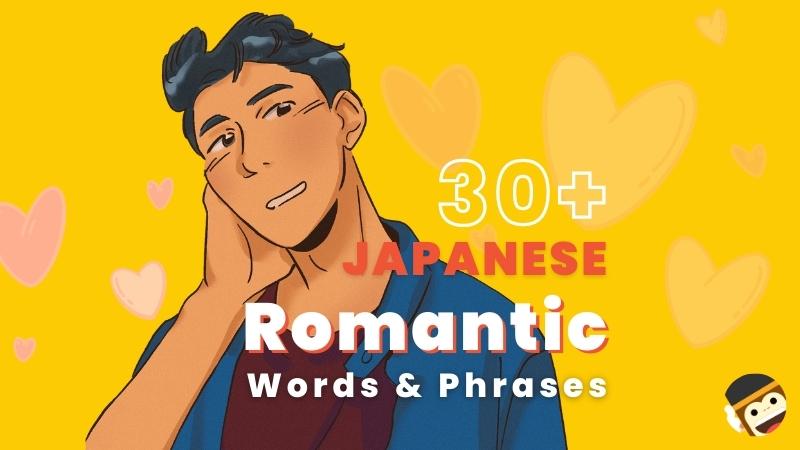 Have you ever heard of the Japanese romantic expression "愛してるよ" [aishiteru yo], meaning I love you? For JPOP lovers, we are certain that you have heard this expression along with other Japanese romantic words in anime, drama, and music. But did you know that the locals rarely use these sweet words and phrases in real life? Unlike in western cultures, couples say "I love you" in any situation. However, that is not the case for Japan.

Today, we will talk about expressing love in Japanese. If you're dating a Japanese person or have a close relationship with the locals, you probably sense that Japanese people don't tell their feeling directly. In Japanese culture, even though they feel something so strongly, they tend to hide it as profoundly as possible. So you may wonder how to recognize their affection and which Japanese romantic phrases you should remember. If that is the case, then keep reading below!

How Do Japanese Couples Express Love?

When it comes to romance, Japan is on another level. Even though Japanese people quickly say thank you and sorry most of the time, they become tight-lipped when saying I love you. Does it mean that your Japanese partner does not have feelings for you? Let's answer that in this section.

Let's learn a bit more about Japanese culture to answer the question. First, there is the Japanese idiom, 以心伝心 [ishin denshin], meaning communicate with each other without words. Its concept is influenced by their religion. To clarify this, it means their action is louder than words. So though your Japanese sweetheart doesn't say 'I love you' that much, they express it through body language or work hard to build a future family together.

So to answer the question... your Japanese partner loves you! It's just that their culture shows more importance to the concept of acts of service and quality time than words.

Asking Someone On A Date In Japanese

Have you ever watched such a scene that urges your heartbeats from anime? Japanese high school students commonly write a love letter and hand it to their crush. And say these phrases;

It's different from western cultures that they straightly go on dating and later officially be a couple. In contrast, Japanese people prefer to make it unmistakable before they push forward to another step.

I Love You In Japanese

In fact, Japanese people frequently say 大好き [daisuki], which is softer than 愛してるよ [aishiteru yo]; note that softer doesn't mean weaker feeling. Also, other phrases that 'love' doesn't even exist in a sentence, but it represents the exact romantic definition. And here are Japanese phrases that contain romantic feelings without the word 'love.'

Have you ever watched a romantic Japanese movie called When I Get Home, My Wife Always Pretends To Be Dead? The crazy storyline is about one Japanese salaryman who gets home and discovers his wife pretends to be dead in considerable creative ways every day. One day, his wife picks him up from a random restaurant after work, and she stops a car on the way to look at the moon. And she says this;

He doesn't realize it until he finds an old book that belongs to his wife. And this phrase has been mentioned in a book as this sentence is a traditional Japanese term, meaning "I love you."

I Miss You In Japanese

One point for you to keep in mind, be careful to use あいたい [aitai] too often. Because Japanese people take this phrase thoughtfully, for example, you and your sweetheart live in a different country. If you say it repeatedly daily, they will get irritated that you don't understand the situation. Even though you don't mean to see them right then or now, they bear it that way.

Will You Marry Me In Japanese

The Japanese word for marriage is 結婚 [kekkon], and it's a direct way to ask someone to build a family together. If you have been dating your Japanese loved one for a while, and they finally invite you to visit their parent, so you should be happy. Again, taking someone to see parents is big for Japanese people. It literally means they're serious about stepping forward with you.

Other Romantic Love Phrases In the Japanese Language

Trying to speak Japanese has always been challenging. And when it comes to romantic relationship conversations, it can be more complicated than we ever imagined. Since Japanese people are generally sensitive to surroundings, they're serious with the phrase like 愛してるよ [aishiteru yo], I love you in Japanese. But now, you have learned a lot from this blog. So the next chance you spend time with your Japanese sweetheart, don't forget to show your profound love with any of the Japanese phrases we have recommended.

Are you going to see your sweetheart in Japan and looking for the most helpful way to say love you in Japanese naturally? Then, you will get what you want! The Ling App is our most recommended resource as it offers a complete lesson so that you can learn Japanese more effectively. While learning Japanese on the Ling App, you will enable to use many valuable features, from listening improvement to a better vocab memorizing technique.

Does that sound exciting? So let's set your language learning schedule. Download the Ling App from the Google PlayStore and Apple AppStore now, and prepare to show your love in Japanese in the most natural way!