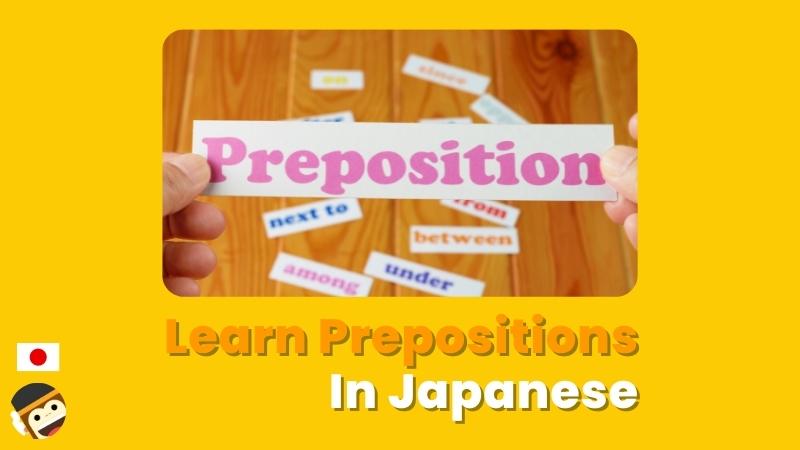 Japanese is considered one of the most challenging languages to learn on earth. People probably think so because of the kanji writing system and the Japanese grammar.

But first, let's see what actually is a preposition in linguistic terms.

What Is A Preposition?

A preposition is a word or group of words used right before a noun, pronoun, and noun phrase. They can indicate a direction, time, or location or introduce an object. The most common English prepositions are "in, at, on, of, and to."

I think prepositions are a kind of assistant words that help us to complete our sentences fully and perfectly.

What Is The Difference Between Prepositions In English And Japanese?

Prepositions in Japanese have the same function as in English; however, they show differences in how they are formed in a sentence. Japanese prepositions often come right after the noun phrase they modify. So they're like postpositions in English.

The other difference is that a Japanese preposition is usually separated between one or more words, usually the standard Japanese particles.

How To Use Japanese Prepositions In A Sentence?

Unlike English, Japanese has an SOV sentence structure, is generally agglutinative, and usually adds particles at the end of sentences. Due to those reasons, prepositions in Japanese are formed differently than in English.

First, let's look at the three different ways to use prepositions in Japanese, and then we'll give you a list of Japanese prepositions where you can find any preposition you need.

Usually, you add aの (no) before the preposition so that you can connect a noun to a location word. To understand it better, please analyze this example:

If you want to describe where something is located in relation to another thing, you should use the particle は (wa). To understand it better, please analyze this example:

If you have to attach a preposition to two different nouns, you can connect them with と (to). The most common example of this situation is 間 (aida)which means ''in between''.

To understand it better, please analyze this example:

It’s possible to use a preposition without の (no). However, you must figure out what the preposition is related to based on the context. Most of the time, it is from the speaker’s perspective.

3 Japanese Words That Mean ''Next To''

There are three different words that you can use to say ''next to'' in Japanese. Since it may be a little confusing for new Japanese learners, we wanted to shed some light on this issue.

となり implies that something is right next to the object you’re talking about. There are no other objects in between.

よこ implies that something is on a horizontal line from the thing you’re talking about. It may sometimes be used instead of となり. However, keep in mind that よこ has other stuff in between.

わき implies that there is a small gap or space in between. For example, it’s usually used for the side of the road.

If you want to learn Japanese or any other 60+ languages offered in the app, then you should try the Ling App!

Ling is a language learning app designed to help all learners. With so many engaging activities to choose from, such as writing and listening exercises, mini-games, quick quizzes, and an AI chatbot to converse with, the Ling App is the perfect all-in-one language learning resource.

Also, don't forget to visit our Japanese blog weekly to learn more about the Japanese language and culture!

This app has everything you need to master all four language skills. You can try the app out for free today by downloading it from the App Store or Play Store.

Start learning Japanese or another new language by downloading the Ling App today!