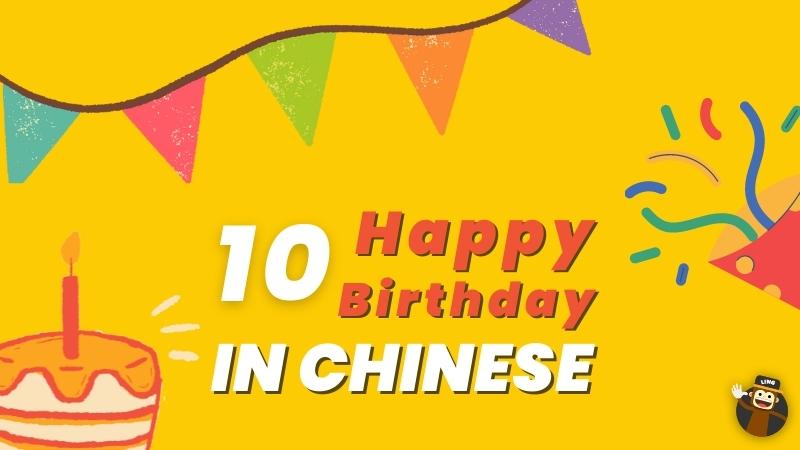 A birthday or 生日, pronounced as shēng rì, is more than simply a regular day. It marks the day you were born and began your lifetime connection with the world. As a result, birthdays have become a significant day for individuals worldwide, including Chinese people. If you have Chinese friends, now is the moment to amaze them by learning how to say happy birthday in Chinese.

While Chinese birthday culture is much more than you may think, from the different cuisine or dessert served at the celebration to the birthday song translated into their own language so, shall we learn more about Chinese birthday traditions before diving into the lesson on wishing someone a happy birthday in Chinese?

Food That Represents A Long Life

People in the Western culture celebrate their birthdays with a cake, and it's also becoming popular among Chinese people. However, there's one of the Asian traditional foods that represent long life. Can you guess what kind of Asian food a long and happy life symbolizes? Tik... tok... tik... tok... time's up!

It should be the food with a lengthy form. Yes, it's noodles! While the cake is common, there're birthday people in China who still celebrate in a traditional way by continuing to eat longevity noodles at their birthday party.

Typically, if we want to know someone's age, we would inquire about their date of birth or just go straight to the point of their age. Chinese people, on the other hand, are an exception. A Chinese zodiac sign is a good place to start when you doubt someone's age. According to the Chinese zodiac (or horoscope), a person's zodiac sign is determined by the order in which the 12 animals appear in their respective year. For those who don't know about the Chinese zodiac, the 12 animals that belong each year are Rat, Ox, Tiger, Rabbit, Dragon, Snake, Horse, Goat, Monkey, Rooster, Dog, and Pig. As a result, knowing a person's zodiac sign allows one to estimate their age.

The Chinese zodiac is a fascinating concept, but it isn't necessary to study everything about it. 你几岁了？ pronounced as nǐ jǐ suì le, which means how old are you is all you need to ask. Yes, it's perfectly OK.

Any present is generally entirely acceptable to offer your Chinese friends. However, there are several Chinese taboos to be aware of. For example, gifting someone a clock or watch is considered impolite since it implies that you are expecting them to die soon. Also, when deciding how many gifts to buy, you should avoid buying four because the number four is 四, pronounced as sì, which has the same pronunciation in Chinese Mandarin, 死, pronounced as sǐ, means death. On the other hand, gifts presented in pairs or eight are considered to be happier.

Chinese learners will have no trouble picking up this music because English and Chinese versions are the same tunes by simply repeating 祝你 生日 快乐 (zhù nǐ shēng rì kuài lè). So the only thing you can do to prepare is to practice properly pronouncing the words. If you're ready, so don't be shy to sing it at your friend's birthday.

How To Make Chinese Birthday Wishes

After learning how to sing and celebrate birthdays in Chinese, you'll also want to send birthday wishes in Chinese. Because of this, it's best to send birthday greetings to your Chinese friends that are appropriate for their age and reflect their personality. No need to worry; we've gathered all the options for you. Then, let's take a deeper look at each one.

The Birthday Person Is Your Friend

The Birthday Person Is Your Co-worker

The Birthday Person Is Elderly Person

The Birthday Person Is A Student Or Child

On the other hand, Chinese people have their own dialect, which can confuse those learning the language for the first time. Learning how to pronounce Chinese words correctly may take some time, but it will help you become a better Chinese speaker in the long run. Also, Chinese birthday celebrations are much different from those in other nations. In place of a traditional Western dessert like cakes, they serve well-known Asian dishes like noodles, which has a wonderful metaphor for life according to their distinct traditions.

You can't deny that knowing about Chinese culture will help you become more proficient in Chinese, can you?

Why not brush up on your Chinese language abilities now? Perhaps you're also looking for the ideal tools that enable you to achieve your goals.

We highly urge you to download the Ling App immediately! For the simple reason that Ling is the most popular language-learning app in the world, we don't want you to lose out on the greatest value. Because it's an easy-to-use application, you can study whenever and anywhere you choose, and most importantly, you can set your own pace and timetable. You may use the Ling App to learn Chinese in various ways,  such as listening to native speakers, memorizing valuable vocabulary, and learning how to write Chinese letters.

Are you ready to start now? So download the Ling App from the Google PlayStore and Apple AppStore now, and prepare to be fluent in Chinese very soon!

More From The Chinese Blog