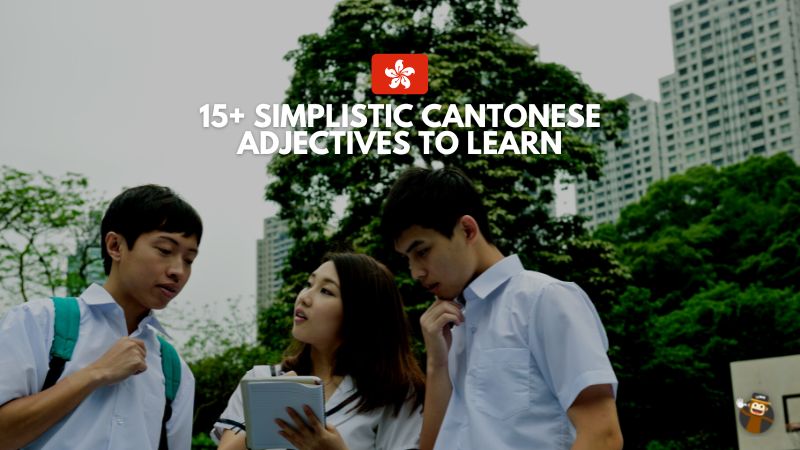 Want to find the best Cantonese word to describe Hong Kongers or their country? Why not learn these Cantonese adjectives 形容詞 (jing4 jung4 ci4) today?

Adjectives describe the characteristics or states of a noun. It basically modifies or describes a noun. Whenever we use adjectives, they elevate the visual quality of what we are describing and give them a more recognizable identity.

The Cantonese word for the adjective is 形容詞 (jing4 jung4 ci4). Learning Cantonese adjectives will be useful in different situations. For example, if you want to go shopping, you’ll use adjectives to describe the item you want to buy or what you’re looking for.

Adjectives can also be useful when you’re traveling. If you’re looking for a specific place or destination that you don’t know the name of, you can use words to describe it so that locals will understand what you’re talking about.

In dining or exploring Cantonese cuisine, adjectives can help you to express your food preference. Do you want your food to be spicy or not? Is it too sweet? Is your food delicious? The list goes on.

Want to learn more about Cantonese adjectives? Keep reading below!

Before we know different Cantonese adjectives, you’ll first have to learn how adjectives are used in Cantonese sentences. Here are three basic ways:

With the tall skyscrapers and bright night lights, you’ll easily fall in love with the beauty of Hong Kong. So, the adjective that fits this is, of course, beautiful. To say beautiful in Cantonese, you can say 靚 (Leng3). You can also say that to a beautiful person you’ve met in Hong Kong.

The next common adjective to learn is good. The Cantonese word for that is 好 (Hou2). You can use this to describe your meal, overall condition, or a person’s characteristic. Well, most of all, being a good person is really important in their culture.

The word “red” is translated as 紅色 (Hung4 Sik1) in Cantonese. Colors are also important adjectives, and one of the most significant colors in Chinese culture is the color red. In fact, you might be familiar with the red envelopes of Chinese, which are called 利是 (lei6 si6) and are usually seen on special occasions like weddings and Chinese New Year.

When it comes to tall buildings and skyscrapers, Hong Kong is known for them. In fact, having a night view of these skyscrapers is one of the highlights of a trip to Hong Kong. So, if you have seen these tall buildings, the Cantonese word for that is 高 (Gou1).

Hong Kong has a subtropical climate; that’s why the weather is one of the weather that locals usually experience is sunny. In Cantonese, the word for sunny is 曬 (Saai3). If you want learn more about Cantonese weather vocabulary, you can check this blog out.

You couldn’t miss tasting the Cantonese cuisine when you go to Hong Kong. So, you might need to learn how to say delicious in Cantonese. The Cantonese word for delicious is 好食 (Hou2 Sik6).

The next Cantonese adjective that you should learn is “right or correct” or 正確 (Zing3 Kok3) in Cantonese. This is really helpful, especially when you’re learning Cantonese when you wanna know if you’ve got the right meaning of the words or phrases.

The adjective easy 易 (Ji6) is also a common word that you’ll hear every day. It can be used when you want to try doing something for the first time, like learning Cantonese.

The Cantonese word for expensive is 貴 (Gwai3). With Hong Kong being an economic powerhouse, it’s not surprising that there are lots of great stuff that you can buy, but it can be too expensive. So, if you’re in Hong Kong and you’re into buying expensive designer items or branded items, you’ll surely love it.

The adjective smart 聰明 (Cung1 Ming4) is also one of the most commonly used adjectives. This word does not just describe people with high IQ, but it can also be used to describe people who are street smart or other kinds of smart.

Hong Kong cities are one of the busiest and fast-moving cities in the world. Everything is fast-moving, like the people, the transportation, and even transactions. So, it would be ideal to learn the Cantonese word for fast. In Cantonese, they say 快 (Faai3).

If you visit Hong Kong and you don’t have any friends yet, it’s better to be friendly 親切 (Can1 Cit3). Making friends with the locals is really one of the most amazing things that can happen.

Traveling around Hong Kong can be tiring and exhausting. So, you should also learn how to say the adjective for “tired.” In Cantonese, they say 攰 (Gui6) for the adjective. You can use it to have a rest when you’re tired.

Did you know that in 2021, Hong Kong ranked 3rd for health security in the world? When we talk about adjectives, it’s impossible not to include the word clean, and the Cantonese word for that is 乾淨 (Gon1 Zeng6).

We will end this list of basic adjectives in Cantonese with the adjective happy. At the end of the day, we all want to see ourselves and the people around us happy. A survey done in Hong Kong at the end of 2021 showed that about 29% of the people who lived there said they were happy in the past year. This showed that people were much happier than they had been in the previous two years.

In a place as developed as Hong Kong, it’s important that you learn Cantonese adjectives with connections to numbers, values, and sizes. Here are some of them:

The main purpose of adjectives is o describe a noun, so here are the Cantonese adjectives with connections to characteristics, appearance, and conditions:

Cantonese Adjectives For Weather And Temperature

Colors are important in our daily lives. Aside from improving the visual appearance of everything, it also makes everything alive. Here are the Cantonese effects for colors. You can also read this blog if you want to learn more about Cantonese colors.

Cantonese Adjectives For Taste And Flavors

Who doesn’t love food? Well, traveling to different countries and places will let you taste their local cuisine. So, learn these Cantonese adjectives for tastes and flavors.

Cantonese Adjectives For Feelings And Emotions

One of the hardest things when you’re in a foreign land, is expressing how you feel. That’s why learning Cantonese adjectives for feelings and emotions is important.

There’s so much to learn when learning a new language like Cantonese, not just adjectives. You need to develop all your language skills like listening, speaking, reading, and more. Ling App has a lot of features that can help you improve these skills. You can also read blog posts like this on the website. With these features and resources, language learning would be a lot easier.

So, if you want to speak and use Cantonese like a native speaker, learn Cantonese with Ling App now!