5 Best Tips: How To Learn Languages With Netflix 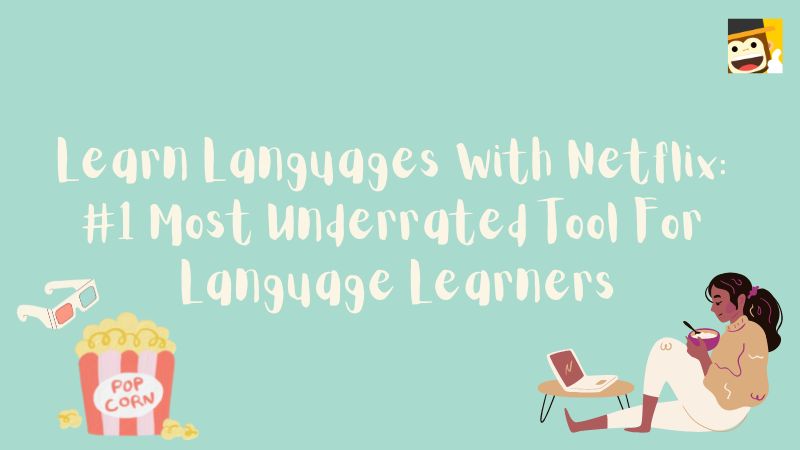 Did you know that there are 222 million Netflix subscribers in the world? That's approximately 28% of the total global population! Aren't those some crazy numbers? Yet, not many people know how to truly maximize their experience on Netflix in a way that can both stimulate their brain and be tons of fun! That's right! We're talking about how to learn languages with Netflix.

Netflix was founded in Scotts Valley, California, in 1997 by Reed Hastings and Marc Randolph. By 2003, their customer base had expanded to 1 million subscribers. Nearly 20 years later, the company has grown to be worth over $176 billion. However, Netflix has evolved a lot over the past two decades. In fact, subscribers in 2003 used Netflix entirely different from how the average subscriber nowadays uses it.

With such a powerful, accessible tool at our fingertips, it's time to learn how we can utilize Netflix and all it has to offer, starting with learning foreign languages!

What Are The Benefits Of Being Able To Speak Multiple Languages?

The list of benefits tied to being able to speak two languages or more is endless. But, to keep it simple, some benefits include improved memory, concentration, problem-solving skills, listening skills, and the ability to multitask.

Everyone knows that learning is good for the brain regardless of the subject. However, learning languages has immense promise for increasing cognitive ability. For instance, studies show that those who know a foreign language are less likely to develop early-onset dementia.

Of course, we could write entire blog posts about each benefit, but that's not why we're here today. We just want you to realize that language learning is so important and something that anyone can achieve, whether you're learning at your local university, through online classes, by watching movies, traveling to another country, or through mobile applications.

Besides the obvious cognitive benefits, learning different languages means better connecting with people from around the world, a deeper understanding of other cultures, experiencing life from different perspectives, and more job opportunities. Just like the cognitive benefits, these social and cultural benefits are endless.

What Are The Top 10 Easiest And Hardest Languages To Learn?

If you're eager to learn a new language but don't know where to start, check out our list of some of the easiest and most complicated languages. Keep in mind that this list is subject to change depending on the individual and what your native language is. We'll be focusing on the easiest and hardest languages to learn for native English speakers for our list.

There you have it! Now you can't delay learning a new language by using the excuse that you don't know what language to learn! It's time to move on to our tips on language learning with Netflix!

5 Tips On How To Learn Languages With Netflix

It's not too good to be true. You can learn languages by watching Netflix! Here are our five tips to help you!

If you already have an existing Netflix account, you can get yourself more organized by creating a separate profile for language learning. You have two profiles: one for personal watching and one specifically for learning. This is important because the movies or shows you watch may differ depending on your intent.

Besides creating separate profiles, you can organize yourself more by looking at how Netflix works. Look at the categories and genres offered. Next, if you find a movie or show that seems interesting, don't forget to add it to "My List." This will prevent you from endlessly scrolling on Netflix trying to decide what to watch. That, in and of itself, can be enough to make you give up on language learning!

Of course, this can differ from person to person. Some language learners might prefer to watch an entirely new movie or show that they aren't familiar with, while others might find it easier to watch something they know.

Actually, RM, a member of the famous KPOP group "BTS," has expressed in multiple interviews how he learned English from watching the classic tv show "Friends" repeatedly! You, too, can benefit from this language learning strategy.

Here are some steps to follow once you eventually find the right movie or show:

Feel free to eliminate or add steps as you see fit, but this is an excellent place to start for language learners!

There's a pause button for a reason. Use it!

Suppose you aren't using audio or subtitles in your language, depending on your preference and language skills. In that case, you can hit pause every 30 seconds to a minute and write down everything you understood in that interval. It's even better to write it all in the target language, but with no pressure! By breaking the content up into smaller chunks, you will increase your level of understanding and avoid getting overwhelmed.

You can also try to listen for a few words or phrases that keep being repeated. If there are any, be sure to note them to either practice now or later. Repetition out loud is another excellent way to memorize new words and improve your accent!

The Google Chrome extension Language Reactor is all you need if you want to get in that extra language practice and watch Netflix, YouTube videos, or any other type of media with double subtitles. The extension is super easy to download and integrate into websites, but remember to use a Chrome browser for it to work.

Here are some examples of how Language Reactor will look once you integrate it into Netflix:

The example above includes both English and Thai subtitles.

This example is for more advanced Thai language learners, including Thai and Thai transliteration subtitles. Yes, Language Reactor can do transliterations!

You can watch all your favorites, from Stranger Things to Money Heist to countless other Netflix originals, with a customizable subtitle menu using this simple extension!

A VPN, otherwise known as a virtual private network, allows you to change your location. For instance, you might be watching Netflix in Canada, but you've changed your location to Thailand.

By changing your VPN, you will be able to access a whole different set of movies and shows, but you will be able to find more content in your chosen language. After all, if your target language is Indonesian, wouldn't it be better to access Indonesian Netflix rather than French Netflix directly? This way, you'll have more options to choose from in your target language, and you can even get to know the target country and culture more by watching their shows and movies.

If you're on the fence about VPNs or have never heard of them before now, they are a safe and helpful resource!

Now would you consider to learn languages with Netflix? If you're part of the 72% of the population that doesn't have a Netflix account, not to worry. We have the perfect alternative if you're looking for another tool that still makes studying languages easy and fun.

The Ling App was designed to help language learners like yourself learn a new language as effectively and efficiently as possible. The app was also developed to help smaller languages gain more recognition. With over 60 languages available, you can find languages ranging from Korean and Spanish to Serbian and Urdu. No matter what language you want to learn, Ling will have it!

Some additional key features of the app include comprehensive lessons that are easy to get through, applicable vocabulary that can be used in real-life scenarios with locals, engaging writing exercises to help improve your written words, and fun quizzes to track your language learning progress. But, perhaps Ling's best feature is its interactive AI chatbot that can converse with you and let you know if your pronunciation needs improvement.

The app is also available in both the App Store and Google Play, so nothing is stopping you from downloading it. In terms of the app's actual hardware, Ling is known for running smoothly, offering clear, crisp audio, and being easy to navigate. Whether you're 16 or 60, you can use Ling!

Apart from the app, Ling has a huge language blog filled with thousands of content related to different languages, countries, cultures, food, and more! If you're ever unsure about anything or interested in learning more, all you have to do is head to the blog.