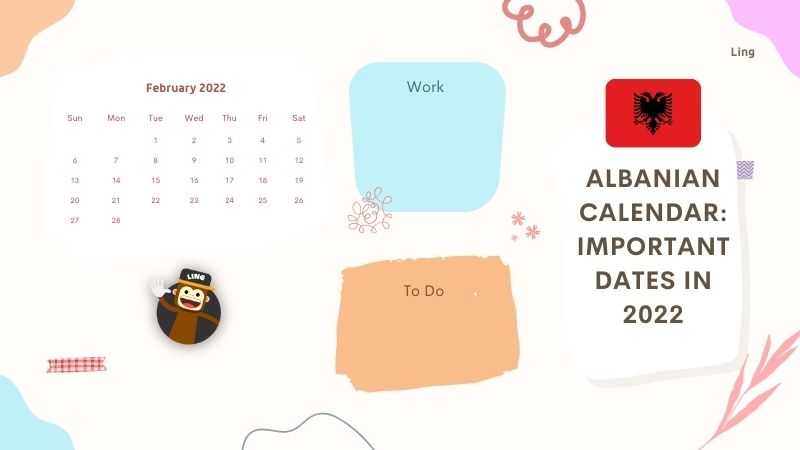 This is a key one today. Knowing times and dates are an important part of orienting yourself in Albanian society, whether you're traveling to Albania for a holiday or whether your career path has taken you there. You need to know when is a good time to travel there and what kind of hours you're expected to work. Here we go! Important dates (and facts) about the Albanian calendar.

The good thing is that Albania uses the same calendar type as Europe and North America, and many of the public holidays and events you will recognize like New Year's Day and Christmas.

If you find this blog useful, you should consider downloading Ling- the app that brings cutting-edge language learning onto your mobile and P.C There is a section on the Albanian calendar as well as how to read times and dates. Ling also has countless other units that will take you from beginner to advanced in Albanian.

Note: these are dates for the calendar year 2022. The days and dates might be different for other years.

Difference Between Orthodox And Catholic Christians In Albania

The Orthodox Catholic Church grew out of the Catholic church. It currently has about 200 million members, mostly in Greece and Eastern Europe.

The most famous date was 1054AD, or what has become known as the great schism when the two finally split apart. Rome(the traditional Catholic base) separated from Constantinople(the Eastern base).

Probably the biggest difference between the 2 branches of Christianity is the concept of papal supremacy. Catholics believe the Pope in Rome is Christ's representative on Earth, so thus has authority over all bishops, something the Eastern branch disagrees with. A similar concept is papal supremacy, i.e., the pope can say no wrong, which the Catholics believe.

The biggest in terms of how it affects the lifestyle choices of the clergy is undoubtedly the notion of celibacy. Catholic priests are not permitted to marry a woman, whereas Orthodox priests are.

In terms of matters related to the calendar and the reason Orthodox easter is celebrated at different times is because of the split in calendars between the Catholic Church and the Orthodox Church. The Orthodox Church follows the Julian calendar, whereas Catholics follow the Gregorian calendar.

What Are The Differences Between The Julian And Gregorian Calendar?

The history of the Julian calendar is fascinating and retains a certain aura because the legendary Julian Caesar designed it. Caesar took his inspiration from the Egyptian solar calendar.

What Is Nevruz Day?

Nevruz Day is a Muslim holiday celebrating the birthday of Ali Ibn Abi Talib and the Persian New Year. Nevruz actually means new. It is also no coincidence this takes place in the Spring as it also commemorates new life.

However, not only does it symbolize new life, but it is also a time for reflection, and it is common for people to visit the graves of their deceased relatives.

Regarding Albania specifically, the holiday has been celebrated since the 1300s when the Sufi version of Islam spread into Albania. Typically speaking, the holiday lasts 3 days and is a very important date on the Albanian calendar. The first is a day for close family, the second is for old people, and the third is for women and new brides.

Ling has been making waves in the language learning app market since 2017.

Now that you know some more about the Albanian calendar, you can begin building more skills in the language. Ling has 50+ units, all with multiple lessons in each unit.

Ling has reading, writing, speaking, listening, and grammar practice. If you've used language learning apps before, then I'm sure you know what to expect. But we like to think Ling offers a little something extra. The leaderboard and points system is effective at getting students motivated. Download now!

That's all you need to know about the Albania calendar. Thanks for reading.