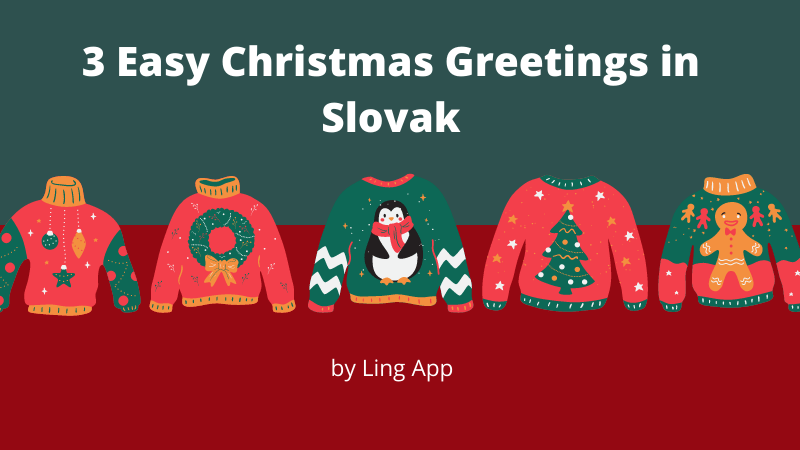 The Slovak culture celebrates the holiday season with particular fervor. It is not uncommon for people to put up lights on the trees or decorate their homes with lights and traditional ornaments before the first snowfall arrives.

Although Slovakia's Christmas probably doesn't sound a lot different from other countries you've been to, there are some peculiar traditions to it. So how is it celebrated? We'll have a look at the typical Christmas traditions in Slovakia and what you can expect from their celebration.

When Do Slovak People Celebrate Christmas?

Christmas is a very important day for this country, and it's filled with customs and traditions that are unique to it.

Slovakia has two significant holidays during December: Christmas and New Year's Eve. The Christmas celebrations start on December 13th and end on December 25th. Many of the traditions typical for this time of the year are pretty standard. They include visiting friends and family, exchanging gifts, decorating trees, singing songs, having a big main Christmas meal at midnight ("the Christmas dinner"), and playing traditional games.

Other customs are not so widespread and famous around the world. However, Slovakia has some unique traditions that will leave you feeling inspired to celebrate its Christmas festival this year.

Slovak Christmas is about people spending time with their family and friends. Traditions for this holiday vary depending on the region, where you live, and the people in your close family.

The Christmas dinner consists of twelve different dishes of peoples' choice, equal to the number of Jesus's apostles.

The Christmas tree is kept in homes until January 6th. This day is called the Feast of Three Kings, or the Epiphany holiday.

In Slovakia, many old traditions are still practiced today. They go beyond the Christian holiday and touch upon the Slavic culture, which is why they are very different from other European Christmas celebrations. For example, a female stranger should not be allowed to enter the house on Christmas day, as it's viewed as a sign of bad luck.

Besides that, you've probably heard of an ancient Roman belief that breaking a mirror brings seven years of bad luck. In Slovakia, it is believed that breaking anything on Christmas brings the amount of bad luck equal to the number of shatters, so make sure you don't break a thing.

In some Asian countries, like China, it's common to sweep away the bad luck for New Year's festival (the Spring festival). But, on the contrary, in Slovakia, it's a common belief that sweeping the house during the Christmas holidays would also sweep away the souls of the dead - which you don't want since you took the time to prepare the extra plate, right?

CChristmas is a time of sharing, goodwill, and celebrating. It is also a time when people are starving for food. There are many Slovak Christmas foods that you might have never tried before in your life. The most common Slovak Christmas foods include a variety of different dishes. The main Christmas meal usually consists of a fish dish, such as a roasted carp with potato salad, dried mushrooms and mushroom soup, golden roast pig, chicken or turkey with sauerkraut soup, and fruits from the forest - dried plums, apples, and pears. Some families make a traditional "Kapustnica" soup, a cabbage soup with meat, cream, and dried mushrooms, but every family has its own recipe, so it's not set in stone.

"Kapustnica" soup, a cabbage soup with meat, cream, and dried mushrooms, but every family has its own recipe, so it's not set in stone.

As a dessert, it's a common tradition for people to eat special poppy seed dumplings called "makové opekance." Other sweets include a wide variety of Christmas cookies, such as gingerbread cookies, vanilla roll cookies, and cookies with dried apricots and nuts.

Other dishes might include sausages, baked ham, roast goose, "pirohy" dumplings, and plenty of vegetables.

IIf you plan on spending the Christmas season in Slovakia, you'll definitely need to learn the most common words, slang, and phrases related to Christmas prior to that, so stay tuned and check out the table below.

Christmas is a time for giving, and the Slovak culture has a few well-known phrases that are said during this holiday.

1) Veselé Vianoce is a standard Christmas greeting that translates to "Merry Christmas."

2) Šťastné prázdniny: we've learned that in Slovakia, the Christmas season consists of several crucial days, not only one, so it's not uncommon to hear this greeting, which means "Happy holidays" in English

Have A Perfect Slovak Christmas With Ling App

Hopefully, you've enjoyed learning about Slovak Christmas customs and traditions, since it's one of the most important holidays for this country. If you're curious and want to know more about their language, check out our other blog posts about Slovak and get ready for the holiday season with Ling App by Simya Solutions! The Ling App is a language learning app with interactive lessons, vocabulary lists, and more to help you learn the language quickly and easily.

With the help of the Ling App, you can put your grammar skills into practice with a variety of exercises that will help you improve your language abilities.

Wait no more, download The Ling App now and learn Slovak on the go!