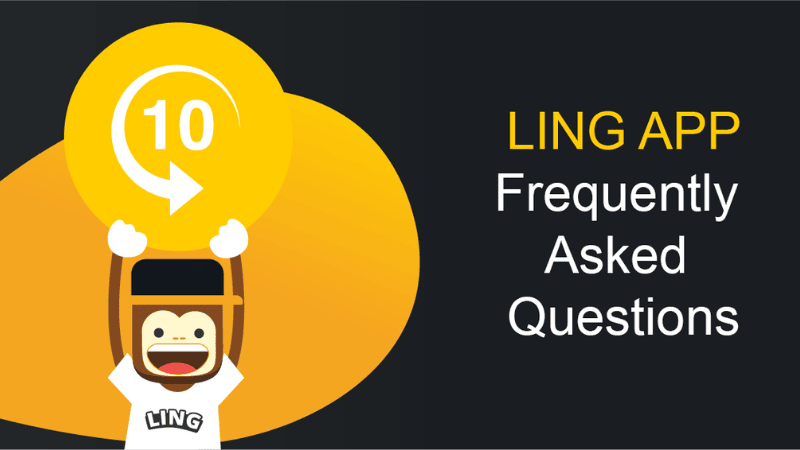 Are you looking for a decent application for learning languages? Ling can be a good option for you to choose from. Below are frequently asked questions by people all around the world about the Ling App. Hopefully, with the answers given, you can decide whether or not to give the Ling App a try.

Is The Ling App Free?

You can learn languages with a free version in the Ling App, including 8 lessons and 60+ language courses. You can subscribe to a Premium version to enjoy more lessons and content. The subscription will help the team maintain and improve the app.

How Much Does The Ling App Cost? Ling App Price

Ling App has a free version. If you want to upgrade to a Pro version, you can select a monthly, yearly, or lifetime subscription. It costs about 4 USD/month if you pay yearly. For a specific price, open the Ling App, then open the Shop screen.

Ling App is encrypted to protect its users so it is impossible to be cracked. If there are any resources providing a cracked version of the Ling App, be careful because they might include viruses, spyware, or malware to steal your personal information.

Is The Ling App Available For Pc?

Ling is available for computers. This web version (Ling Web) is accessible from website https://ling-app.com/, copyrighted by Simya Solutions Ltd., the company which developed the Ling App.

Download Ling on App Store for your iPhone, iPad: https://apps.apple.com/us/app/learn-languages-with-ling/id1403783779

Can I Learn With The Ling App Online And Offline?

You can learn languages with the Ling app online and offline.
All features are available on online mode. For offline mode, you can access almost all content in the app as long as you have opened the units or languages you want to learn when you are online. Some features are not supported offline including Speaking Games, Leader Board, Share to Social, and Send Error Report.

Where Can I Get Ling App Updates?

We usually release a new update every 2 weeks on Play Store and App Store to improve the quality of the app and/or bring more features to our users. Check the latest updates on our stores:
- Play Store: https://play.google.com/store/apps/details?id=com.simyasolutions.ling.universal
- App Store: https://apps.apple.com/us/app/learn-languages-with-ling/id1403783779

What Do People Say About The Ling App On Reddit?

What people say about Ling on Reddit: Duolingo vs. Ling - Which languages can you learn in each app?

Do You Have A Ling Cantonese App?

We do have a Cantonese course in the Ling App. You can learn Cantonese with Ling App at https://ling-app.com/learn-cantonese/

Can I Learn Malayalam In A Ling App?

Yes. You can learn Malayalam with Ling App at https://ling-app.com/learn-malayalam/

Do You Teach Serbian In A Ling App?

Serbian course is available in the Ling app. Check it out at https://ling-app.com/learn-serbian/

Do You Have A Ling App For The Tagalog Language?

You can learn Tagalog with Ling App at https://ling-app.com/learn-tagalog/

Can I Learn Thai With Ling App?

Absolutely. You can learn Thai with Ling App at https://ling-app.com/learn-thai/

Learn about what people in over the world are talking about Ling app:
1. A Duolingo Replacement? This App Has WAY More Languages | Learn With Ling App Review

Is Ling A Real Word?

According to Oxford Learner's Dictionaries, 'ling' is a low-growing plant that is a type of heather and that grows on areas of wild open land. On the website Dictionary[dot]com, 'ling' is an elongated, marine, gadid food fish, Molva molva, of Greenland and northern Europe. 'Ling' is also the name of a language app that teaches more than 60 languages including less-spoken languages like Thai, Serbian, Tagalog, and so on.

What Does The Name Ling Mean?

'Ling' has different meanings in different languages such as English, Thai, and Chinese. In English, 'ling' is a name of a low-growing plant that is a type of heather and is also a type of fish in Greenland and northern Europe. In Thai, 'ling' means monkeys.

What Does Ling In Chinese Mean?

Ling is written as 靈 in Chinese traditional and as 灵 in Chinese simplified. In both Chinese languages, 'ling' means spirit.

Is Ling Another Word For Heather?

As mentioned in the Oxford Learner's Dictionaries, 'ling' is a type of heather. You can google 'ling heather' to see the images of this plant.

Ling app is a game-like application that teaches languages. There are more than 60 languages in Ling such as English, Spanish, Chinese, Thai, and so on. Ling app is available for iOS, Android phones, tablets, and web browsers.

Can You Become Fluent With Ling?

It depends on how much time you spend on Ling. Ling can level your language skills up from beginner to advanced. As Ling provides you with vocabulary and sample questions, speaking and writing tests, and spaced-repetition games, you can definitely get to a certain fluency. The key to being fluent in language learning is practicing the language as much as you can.

How To Become A Ling App Affiliate?

You need to contact our support team and request deleting your Ling app account. In the Ling mobile app or Ling web, open the Settings tab, then tap/click "contact us" to send us an email. Kindly provide your account's email address, so our supporters can help you out.

Can I Get A Discount On The Ling App?

You can sign up for our newsletters to receive promotional emails from Ling when there are active campaigns. On the sign-up screen on the Ling mobile app, make sure you enable the toggle "Sign me up for Ling updates, learning tips, and exclusive offers!" (see the screenshot below for reference). Remember to confirm via email to start receiving newsletters from Ling. 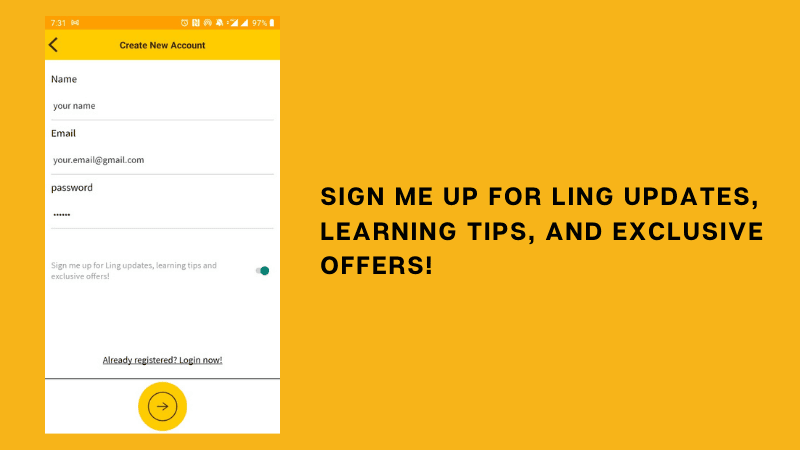 If you still have more questions about Ling App, send us an email via our Customer Support System.

More From The Press Releases