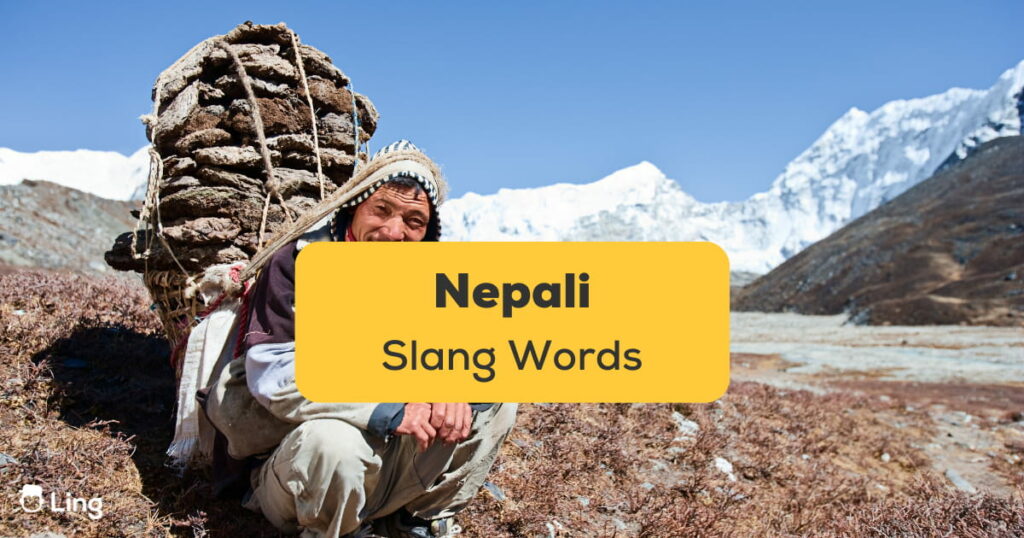 The Nepali language contains a rich collection of Nepali slang words and phrases. It can be heard when examining the everyday language of ordinary Nepalese.

For those who do not know what “slang” is, it is a kind of term that has arisen from different groups of people usually formed during a conversation. Yet, they have different meanings on their own, but over time, meanings vary and become slang.

Nepali slang words are enjoyable to use, but it is challenging to use and understand in some ways. I hope in this blog to collect many of these vocabularies with a brief explanation.

It is used mostly by teenagers, and it means to irritate someone. For e.g.  Gidi nagarana tme and so on.

Hait is one of the popular Nepali slang words to express the extremity of any situation. E.g., Hait! Kina risako esto or Hait! Kasto Garmi?

This word is probably one of the favorite Nepali slang words by everyone, and it has been widely used across the country. This expresses the speaker’s indifference but in an aggressive manner. Example: Ta jey sukai gar, malai baal xaina!

The word is used slang to refer to people who belong to rural areas and villages. Also, it gives the same sense as “Pakhe.” Example: Raddi camera rahexa!.

The word is slang used to refer to people belonging to villages and rural sides. It also gives the same meaning as “Pakhe.” Example: kaathe rahexa or Kasto pakhe!

The technical definition of ‘Patyaune’ is foldable, but Nepalese teens use it as slang to impress a boy/girl or get a boyfriend/girlfriend. E.g., Sathi taile kt kaile patyaune ho?

The phrase refers to rubbish or nonsense and expresses strong disbelief in a person. For e.g., Taato-na-chharo nachaine kura garxa!

Other Common Nepali Slang Words To Sound Like A Native

Learn Language Of Nepal With Ling

Before you pronounce Nepali slang words, you need to find a way to learn the essential words and phrases of Nepali to interact with the locals easily. In addition, if you learn Nepali greetings, it will be helpful for your business meetings or family trips. So, join the Ling app, Simply Learn, or  Write Me by Simya Solutions to learn an international language and make your business flourish, or you can use it when you choose to travel.

In addition, if you have any questions, you can visit the FAQs page of the Ling App blog.