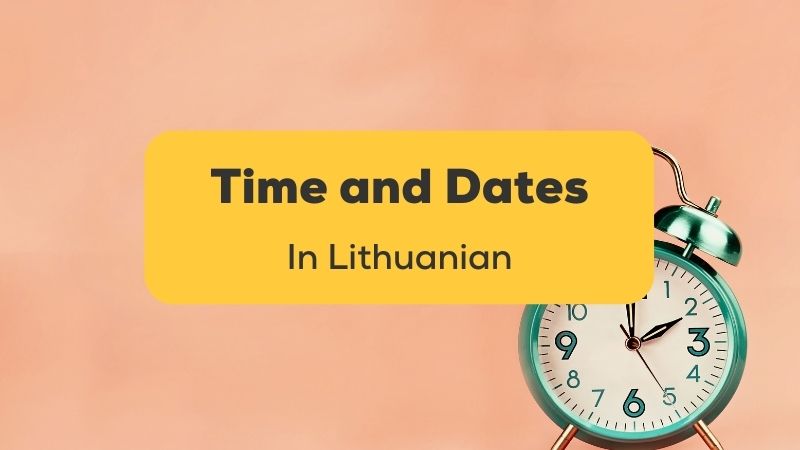 Kiek dabar valandų?, simply translating to “What time is it?”, is one of the most useful sentences you may need while walking the beautiful streets of Vilnius. Knowing how to tell time and dates while traveling in a country where they don’t speak your native language is very important. The last thing you want is to miss your important meeting or appointment because you misread the time and date!

In this article, I’ll tell you everything you need to know about telling time and dates in Lithuanian and make sure you always stay on time! Before diving head first into learning more about this language, you should probably have some notions on how to read and write numbers. If you haven’t read it yet, check out this amazing text from the Ling App blog, where learning Lithuanian numbers is made super easy to learn!

Let’s Start From The Top: Time And Dates In Lithuanian

Now that you know how to say your numbers, you’re ready to dig deeper into a new vocabulary. Here I’ll teach important words and phrases that you’ll use to tell both the time and the dates in Lithuanian.

How To Write The Months In Lithuanian

In this country, the Gregorian calendar is followed, so the process of learning the months in this language is a simple task of translation. Although the similarities with English cannot be seen, once you get the hang of these words, you’ll see how easy they are to memorize.

Meaning “dry” due to the fact that the month of January is in the middle of the winter, which usually is very cold and dry.

Coming from the word vasara which means summer, this refers to the wish of people that summer comes and winter ends.

References to the bird rook that starts to return to the country during this month.

Straight translation to “pigeon.” In April, winter starts to turn to spring, and birds start to chirp. Pigeons remind people of that.

“Cuckoo” in Lithuanian, marking their return to the country.

Comes from the word biržis, a mark on the ground where a plant should be planted.

Also related to ryes, literally means “sowing rye” where the ryes for the next harvest are being planted.

Meaning “fragments of the husk of flax”

Simply meaning the time of the year when leaves start to fall.

It came from the word “gruodas,” which means lumpy frozen land when cold winter days are about to start.

How To Write Years In Lithuanian

As in many other European countries, years are read exactly as they are written, each number one by one: for example, 1990 will be read as “one thousand, nine hundred and ninety,” or tūkstantis devyni šimtai devyniasdešimt. To help us figure this out, let’s break it into parts:

Here are a few examples of how to read years:

How To Write The Days Of The Week In Lithuanian

Saying the days of the week is also one of the fundamental skills you learn when dealing with a new language.

Lithuanian language is what I call a very pragmatic language, and one of these examples is how weekdays are written. Basically, Monday – that is the first day of the week – is written just like that “first day,” or pirmadienis. Is there an easier way to write the days of the week? You just take the word pirmas (first) and add dienis (day). The same logic follows for the remaining days.

How To Write The Seasons In Lithuanian

Just like the days of the week, learning how to say the different season in Lithuanian is also a fundamental vocabulary asset that you should master.

How To Write The Date In Lithuanian

The date in Lithuania is given in a different format than usual: the year comes first, and a letter m is added (m for metal, or year). Next is written the month and it is followed by the day, where the letter d is also added (d for diena, or day). The logic behind this format is to narrow it down as long as we keep telling it, starting with the most general information and ending with a specific day.

Sound easy? Well, this is when I’m here to say that nothing is as easy as it sounds!

Let’s start with an example: March 1st, 1990. This would be written as 1990 m. kovo 1 d. Notice how the month of March is written as Kovo instead of Kovas as I taught you in the Vocabulary section. This is exactly the same word, the only difference is that. as this is being used in the date, the word Kovas is being used in the genitive form Kovo instead of the nominative form.

For telling dates, months should be written as follows:

So how do you pronounce this date? In this case, 1990 m. kovo 1 d is read as tūkstantis devyni šimtai devyniasdešimt metais kovo pirmą, or “March 1st in the year one thousand nine hundred and ninety” in English.

How To Tell Time In Lithuanian

Laikas is the translation of the word for Time. In Lithuania, like in the great majority of European countries, time is told in a 24h format. Although AM and PM formats are not used, it is fairly easy to identify if a time is in the morning, afternoon, or night.

Time is told exactly as read. However, it can be told in several different ways. For example, to say 12:10, you can either say “twelve hours and ten minutes” (dvylika valandų ir dešimt minučių), “ten minutes past twelve” (Dešimt minučių po dvylikos) or even “after twelve ten” (Po dvylikos dešimt).

How to Understand Half-past, Quarter To, And Quarter Past

The term “Half Past” is said as “thirty minutes after…” or “half an hour after…”. For example, if you want to say the time 10:30, you would say either “thirty minutes after ten” (trisdešimt minučių po dešimties) or “Half an hour after ten” (pusvalandį po dešimties). Another example is the time 12:30 which is read as pusę pirmos – half past the first hour.

The term “quarter to” is not used. Instead, the word penkiolika, or fifteen, is used to express either it is passing within the hour or its absence for a specific hour. For example, to say the time 12:45, you would say “without fifteen (minutes) one” or be penkiolikos (minučių) viena/pirma.

Asking “What time is it?” is not as straightforward as you may think. Although the translation for this sentence may be koks dabar laikas, this is not used, and instead, you should ask, “How many hours?” or Kiek dabar valandų?

Cheatsheet To Telling (And Asking) About Time

Here are a few important phrases, sentences, and words that might come in handy when talking about time.

Besides important sentences, here is a list of a few important adverbs of time.

And that’s it! You’re officially started in your journey to learn more about this beautiful language! But why just stick to this when you can learn so much more? I have the perfect place for you!

Let me introduce you to my friendly monkey Ling, he is the mascot of our amazing learning language app, Ling App, which will help you master any language in a blink of an eye. This amazing app is filled with relevant and interesting content that is presented to you in a fun and interactive way, guaranteeing you the most effective and creative way of learning a new language.

Don’t waste any more time. Download the app from the Play Store and App Store to start learning Lithuanian today!