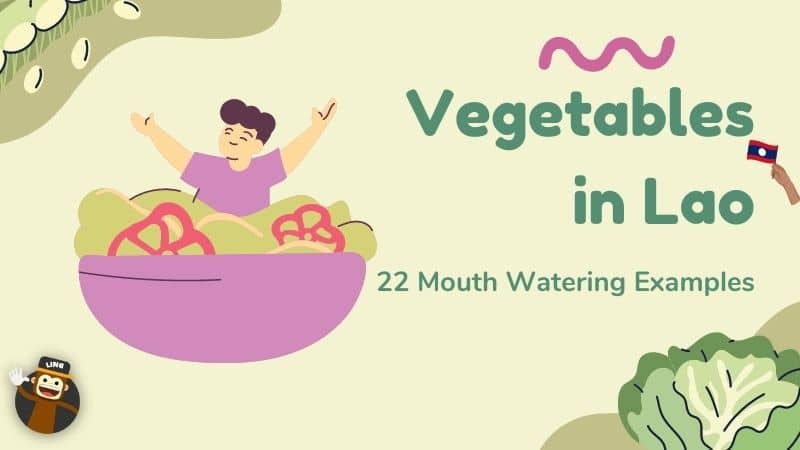 Everyone’s gotta eat, right? The following is a list of vegetables in Lao that you can utilize when conversing with the locals. Perhaps, you can use this list when you’re bartering at the chaos of the market or if you’re in a nice air-conditioned supermarket in Vientiane. Here are a few basic examples to get you started: Cabbage (ka loa pi) ກະລໍ່າປີ , Carrot (aekhlod) ແຄລອດ, and Mushroom (hed) ເຫັດ. Want to learn more? Keep reading!

Remember: If you enjoy this content, then download the Ling app where you can find similar lessons as well as countless more.

Climate is just a fancy word used to mean the weather. Obviously, for vegetable growers as well as tourists, it is tremendously helpful to know what the weather is going to be like.

If you want colder temperatures, head to northern Laos and places like Luang Prabang. However, at night throughout the whole country, it can sometimes get chilly,

Flora is just a fancy word for plants.

If you know anything at all about Laos, its probably that its extremely dense with jungle– the kind of landscape that botanists would call ecologically pristine(however, this is changing in recent years due to illegal logging (Laos’ actual logging exports are 900% higher than the legal limit).

In fact, around 60% of Laos is covered by jungle. To make it even more inaccessible, the country is also extremely mountainous. This is the prime reason Laos has lagged behind its neighbors in terms of economic development.

But what are tropical rainforests actually made of? Mainly trees like bamboo, Asian Rosewood, and teak. The rainforests have three vegetation layers. The bottom layer consists of wild grasses, shrubs, and bamboo shoots. The middle layer is where you find Rosewoods and teak. The top layer is made of dipterocarps, which are absurdly tall and flower beautifully when they come into season.

A ubiquitous flower you might see in Laos is the orchid. And the number of different fruit trees is staggering. The most famous plant in Asia(and one you can eat if prepared in the right way) is bamboo. Here are some interesting facts about bamboo.

For millennia farming was central to the economy of Laos, and it’s not surprising when you consider that it has a landmass of 23.68 million hectares. However, currently, only 4% of that land is cultivated.

The biggest crop, as you’d expect, is rice which dominates over half of the crops grown.

Anyone who has been to Laos and Northern Thailand will know that an unfortunate aspect of farming is the slash-and-burn tactics employed by farmers. This deforestation is vital for farmers who want to replace trees with crops, but it also tremendously damages the environment.

Another popular crop is coffee. There are two types of coffee beans, robusta, and arabica. The higher quality of the two is arabica, which is usually used for espresso. In total, Laos produces 20,000 tons of coffee each year. 20,000 tons is equal to 20 million Kg

This next entry is a little crazy, but Laos actually grows a lot of opium, the primary ingredient in heroin. The crop is grown by the Hmong ethnic minority in Northern provinces that rebel against government initiatives to shut down its production. However, the amount of opium produced is massively reduced to what it was in the past.

If you’d like a guide on Lao food, why not drop us a comment? There’s a lot you can do with vegetables, whether stir-fried or mixed with noodle soup, and we have a lot to say about fermented fish sauce, sticky rice, lemongrass, sesame seeds, lemongrass, papaya salad, rice vermicelli, and soy sauce. In fact, Lao cuisine is really exceptional and, in my opinion, better than Thai food. Lao dishes are more varied.

We hope that this guide was engaging for you to read. For more blogs, check out our homepage. The most clicked on recently have been Lao business vocabulary and hobbies in Lao.

So what specifically is Ling? It’s an app that allows you to learn Lao (as well as 60 other languages) in bite-size chunks. Ling is the modern way of learning a language removed from dog-eared books and dusty chalkboards. Pull out your phone while you’re waiting for a bus and do a ten-minute lesson on 50 different topics.

We have reading, writing, speaking, listening, vocabulary, and grammar practice.

What are you waiting for?