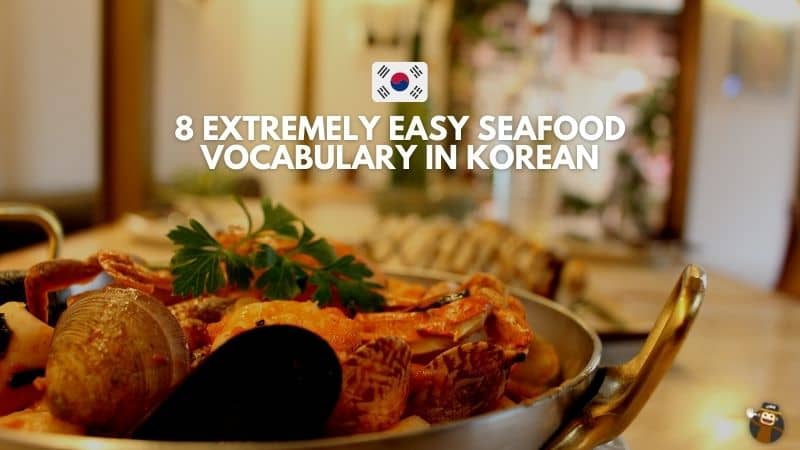 Hometown Cha-cha-cha is an amazing K-drama. It's because of the love story and seafood 산물 or haesanmul. Today, let's learn about seafood vocabulary in Korean. Keep reading below!

Korea is a peninsula bordered on three sides by the sea. Because of this, it's not surprising that Korean cuisine is rich in seafood. Their fondness for seafood can also be seen in their K-dramas like Hometown Cha-cha-cha Koreans eat seafood raw, dried, salted and dried, fermented, and prepared in various ways.

Today's lesson will focus on learning different seafood vocabulary in Korean. You will see the complete list of common seafood vocabulary that will give you a headstart learning about Korean seafood. There are also sample sentences related for you to practice to make everything even more fun. So, let's start!

The first vocabulary that we will learn is the Korean word for seafood. Koreans use the word 해산물 haesanmul to refer to seafood. Seafood refers to any type of sea life that humans consider edible, most notably fish and shellfish. South Korea has one of the highest seafood intake rates in the world. Given that it is a peninsula, this is hardly surprising.

Consumer views and behavior toward fish are shifting in South Korea and Asia. According to research, these customers are becoming increasingly concerned about pollution and climate change in our oceans. According to the same poll, 61% of consumers feel that to rescue the seas, we should only eat fish and shellfish from sustainable sources.

Given this information, we can imply that Koreans are not simply consuming seafood; they are also consuming them wisely. They are thinking about nature to conserve their resources for the near future. This is amazing about South Koreans.

After learning about the Korean word for seafood (산물 haesanmul), let us now learn some common seafood vocabulary.

Korea is a peninsula; they are surrounded by water. Therefore, they are rich in water, meat, and fish resources. Fish is essential in Korean cuisine. It is used to make different delicious fish dishes like the following:

In Korean, there are two fundamental words for "fish." The first is 물고기 (mulgogi), whereas the second is 어류 (eoryu). Both are equally correct when talking about fish, but you'll hear the word a lot more because it's mostly used in academic and scientific situations.

However, the more appropriate word to use when talking about 'fish' in terms of food you've eaten, wish to eat, or consume is 생선 (saengseon). If you want to talk about "fishing," you can choose from a few basic conjugations of the same word - the verb base 낚다 (nakkda) and 낚시하다 (nakkshihada). All of which fundamentally mean the same thing.

Do you remember the scene in the first episode of Hometown Cha-cha-cha when Hye-jin cleaned squid to earn money? Look how the locals enjoy doing that. This particular scene proves that squid is essential seafood in South Korea.

Squid 오징어 (Ojingeo) is one of the main ingredients in making Korean dishes such as Haemuljeon and Ojingeo Bokkeum. Squid is the economy's lifeblood for people living in Gangwon Province and North Gyeongsang Province. But in 2018, Because catches have decreased dramatically in recent years, squid has become much more expensive in South Korea than before.

But hey, when we hear the word squid in relation to South Korea, one thing will come into our mind - Squid Game, the hit Korean show. The squid game got its name from the numerous squid-body part shapes drawn on the playing ground in which the finalists are required to play the titular children's playground game.

Crab 게 (Ge) is the next vocabulary that we will learn. It is one food that you often see in a mukbang video. In Seoul, South Korea, the spring season is also called "King Crab Season." During this tie=me of the year, King crab restaurants adorn the streets of Uljin and Yeongdeok in Gyeongsangbuk-do. At the same time, more eateries providing this delectable seafood can be found in Seoul and Incheon's busy business districts. Although it's pretty expensive in South Korea, it's definitely worth it.

If you can't go to South Korea, you may start watching episode 5 of the Korean series called "Let's Eat" (season 2). You can also go to the nearest Korean restaurant and try crab dishes like 게장 Gejang, a traditional Korean dish made with marinated crabs. The classic marinade is usually made with soy sauce called gejang gejang, while the spicier version is called yangnyeomgejang.

Lobster 바닷가재 (Badaggajae) is pretty expensive seafood, especially if you live in a place far from the sea. But, if you go to South Korea, there are seafood buffet restaurants that offer lobster, so you can eat lobster all you want, like the Flavors Buffet Marriott Hotel.

In Korean cuisine, they have Sannakji, a popular South Korean dish made with a raw baby octopus that has been diced and drizzled with sesame oil. Because the dish is served immediately after cutting, some pieces are still moving about on the plate, twitching.

South Korea is also known for its Japanese-inspired octopus on a stick. It is a BBQ char-grilled octopus coated in umami-rich bonito flakes and sprinkled with slightly sweet okonomiyaki sauce. They also have the Stir-fried octopus, a side dish, or banchan 반찬.

Oyster 굴 (Gul) is one of the favorite seafood not just by South Koreans but also worldwide. In an episode of Let’s Eat two, a series about a food blogger named Dae Young, Im Taesu was led to this oyster restaurant by Dae young, and they enjoyed mouthwatering oyster dishes. If you're craving Korean oyster dishes, you can try Guljeon (굴전), a South Korean dish with a long history. Oysters are used in this form of jeon or pan-fried battered cuisine.

The next seafood vocabulary is salmon 연어. After a farm in Gangwon Province harvested 500 metric tons of the world's most consumed fish, South Korea has created Asia's first farmed salmon. It is the main ingredient of popular Korean dishes like Salmon Bulgogi, Grilled Salmon In Spicy Korean Marinade, and Spicy Broiled Korean Salmon.

Seafood And Sea Creatures In Korean

Learning Korean is like fishing in the sea. It would help if you had time, patience, and passion for succeeding and achieving what you want. Like fishing, learning Korean also needs tools to help you achieve your goals quickly. Luckily, there's Ling App.

With Ling App, you'll have lots of activities that will help you familiarize yourself with the Korean alphabet to read Hangeul effectively. You can practice using the dialogue feature, and you can also have fun while learning with the fun mini-games and quizzes. If you want more lessons, you can always choose without any hassle.

Learning Korean can easily be achieved with the right tool, patience, and passion. So, don't waste any time. Learn Korean with Ling App now!