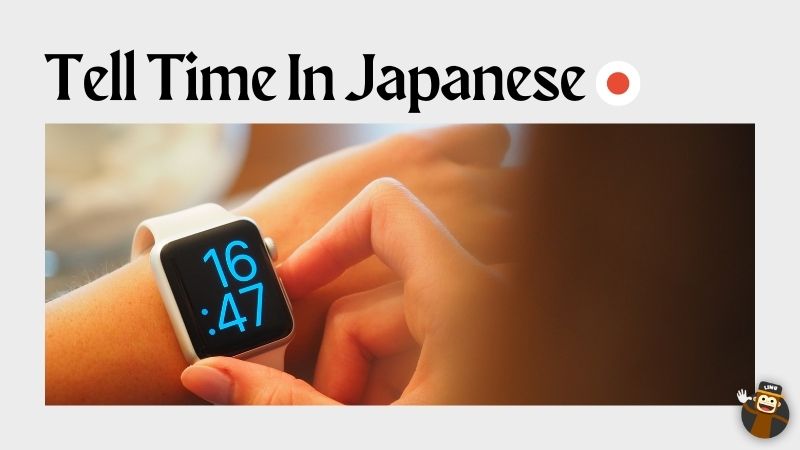 Knowing how to tell time or ask about time is an important everyday life skill to have, no matter where you are in the world. You've got places to be, meetings to go to, trains, planes, or buses to catch, or you simply just want to know, what time is it?!

When you're visiting or living in Japan, it's a vital skill to tell time in Japanese. The Japanese are sticklers for time, and everything in Japan runs like clockwork, and people are also expected to. It is considered rude and unprofessional to be late for anything, and no forms of transportation will wait for you, so you'd best be on time!

This article will cover all the different ways to tell the time in Japanese and give you useful basic vocabulary and Japanese time phrases to communicate about time in general. Let's go learn Japanese!

Which Clock System Is Used In Japan?

The 12 Hour Clock System In Japan

*Hiragana is a more widely used form of Japanese writing.

When speaking to others about time in general circumstances, you'll use the 12-hour clock. When discussing or asking about transportation, you'll need to use the 24-hour clock system.

The 24 Hour Clock System In Japan

Thankfully Arabic numbers are used to tell the time in Japan, which will make telling 24-hour times much easier. However, sometimes they may be presented in a slightly different way.

If you refer to the symbols from important time vocabulary at the start of this article, you'll notice that 時 (ju) means hour and 分 (pun) means minutes. Therefore 15時40分 means 15 hours 40 minutes.

To say 15時40分 in Japanese, you'd say じゅうごじ よんじゅっぷん (ju-go-gee-yon-jup-pun). You would state the hour first, followed by the hour value, the number of minutes, and end by stating minutes.

Presented in this table is how to read numbers in kanji. Kanji is a system of Japanese writing that uses Chinese characters. Also presented is Sino-Japanese. It also comes from Chinese origins. Sino-Japanese is used for numbers because native-Japanese numbers only exist up to 10.

How To Count Beyond 10 In Japanese

Once you get beyond 10, the Japanese use a different counting system where the tens and ones are added together to form a new number. For example:

When combined to form a number such as 41, the numbers look like this:

How To Say Hours In Japanese

If you are expecting the arrival of a person or a package, you may be asked, How long until _ gets here? In this example, you may be asked to respond in 2 hours or 5 hours. Here's how you can respond appropriately and to the point.

How To Say Minutes In Japanese

You may find yourself answering questions such as when will the movie start? Or when will the next train arrive? To answer these questions in Japanese, you'll need to know how to say the numbers and terms for hours and minutes.

How To Say Half An Hour In Japanese

Well, half an hour isn't a phrase used in Japan. Instead, they use the symbol 半 to indicate half past or thirty minutes past the hour.

For example, if you wanted to express 1:30 in Japanese, simply add 半 after the hour.

How To Say Quarter Past Or Quarter To In Japanese

Like with half past, there's no expression for quarter past or quarter to in Japanese. You would simply state the actual time. For example, 7:15 would be 7時15分 (shichi-ju-go-pun) or seven hours and fifteen minutes.

How To Say Seconds In Japanese

Although it's likely a rare scenario where you would need to know how to refer to time in seconds, this information may come in handy.

Useful References To Time Of Day In Japanese

These nouns and phrases relating to times of day may help explain or understand when certain events are happening throughout any given day.

Some Important Questions To Help You With The Time In Japanese

Some Important Japanese Phrases To Help You Answer Questions About Time

Turns Out, Telling Time In Japanese Isn't That Difficult!

It makes you wonder if learning Japanese as a language is just as easy. Well, it certainly can be! If you learn the Japanese language with Ling, you'll find it simple and fun.

With Ling, you'll learn everything from telling time in Japanese in real-life contexts, holding entire conversations, writing in Japanese, and learning proper pronunciation so you can sound just like a native speaker.

With only up to 15 minutes a day, you can be speaking Japanese (or any of the 60 plus other languages our app offers. Check it out now!

We hope we've given you enough examples to tell the time in Japanese. When you visit Japan, you will be able to communicate and not miss any appointments!