20 Most Common And Useful Greetings In Arabic 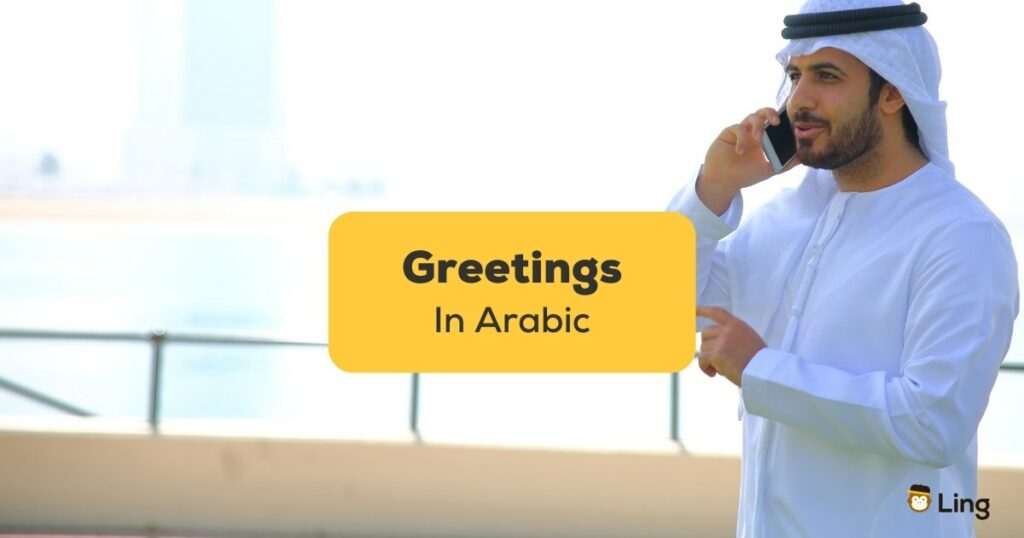 Do you often come across Arabic speakers, but do not know any common Arabic greeting besides saying hello? In this blog post, you will learn some fantastic greetings in Arabic to get the conversation going.

This article not only has almost every standard Muslim greeting for Arabic people but also the greetings that work for non-Arab Muslim speakers. So, let’s get started!

How To Say Arabic Greetings

Not knowing how to say hello in Arabic can be a big issue if you’re in an Arabic-speaking country. I went to various gulf countries to explore Arabic culture, but I refused to learn the language because it didn’t seem to be necessary.

I knew the most common way of greetings in Arabic including “waʿalaykum as salām” or saying “ahlan wa sahlan”, but these do not help you escape from situations of awkward silence.

After having a negative encounter with a native speaker due to my lack of understanding, I learned my lesson. I started practicing every verbal greeting in Arabic, which helped me learn Arabic quicker. Now that I have completed my journey of understanding every common greeting, I want to educate other people on this topic.

This is the simplest greeting used to say Hello In Arabic. It is a very polite greeting, soft to say and it has a neutral touch. This can be used for anyone at any time of the day. It is usually said by putting hands around the back accompanied by a small kiss on the cheeks saying “أهلاً” “Ahlan”.

“Salam Alaikum” “سلام علیکم” or “Assalamu Alaikum” “السلام علیکم” is a common Arabic greeting. It is commonly spoken by all the Muslims of the world and not only Arabs. It has a literal meaning of “peace be upon you”.

Salam is comfortably used in all places and at all times of the day whenever two or more people meet each other. “Wa Alaykum as-salam,” “وعلیکم السلام” meaning “and upon you peace,” is the standard response of Salam Alaikum. Salam Alaikum is usually used when speaking to groups. Despite being a plural, Salam Alaikum (سلام علیکم) is used in both ways (singular or plural). Some variations in salam are:

This is a nice thing to say, and it is in kind of a soft tone. In some parts of the Arab world, it is considered to be funny because Awefe isn’t commonly spoken by the local people. The word Awefe literally means “May you have a lot of health to keep you in shape for all the stuff that you are doing.”

The plural of “Marhaba” is ” Marahib. When there’s a group of people and just one “Hello” is not fulfilling its meaning, just throw a lot of hellos at them! Marahib!

It is commonly used by young ones among their friends or by anyone who wants to greet a group of people collectively instead of greeting them one by one.

It is kind of convenient. Levantine people use it for saying “Hello and Welcome.” A suitable reply is “ﻣَﺮﺣَﺒتﺎً” “Marhabaten” which means “Hello and welcome twice”. It is most commonly used among close friends.

It literally means, “May God give you health” and is usually used to greet people at the office or any other workplace where God may give them the strength to do all their work. It is important to know that it can be used in a neutral way, without a religious connotation.

This is kind of a question in the Arabic language that is used to inquire about someone’s well-being. And sometimes, it is used in a manner of greeting. Kifak is the word that is used commonly when someone wants to ask the question “How are you?” in Arabic.

Usually, a suitable reply is “الْحَمدِ لله” Alhamdulillah”. But if one is feeling bad or down, they can answer with “ماشي الحال” or “meshe lhal” which means “it is ok.” Normally, this question or greeting is never asked alone; rather, it is accompanied by some more questions like “كيف الحال؟” “How are things?” and “كيف الصَحَّة؟” “How’s your health?”.

“Sabaho” means “Morning” in English. It’s close to saying “Good Morning.” A reply to “Sabaho” would be “Sabaho” or “Sabah el kheir.”

“Sabah el noor” means the “morning of the bright light”. It is a beautiful greeting and you are wishing the other person a bright morning. A reply can be “Sabaho” or “Sabah el kheir.”

It literally means “good day” but is taken in its metaphorical meaning, i.e., “happy day”. It is used to wish people a “happy day”. Naharak Saeed is the sweetest greeting ever.

The literal meaning of Sho el Akhbar (شو الأخبار) is “what is the news?”. Usually, it is used for saying “what’s new?”. In everyday life, it means “What’s new”. Normally the locals don’t use it mainly for greeting. It seems better when used after Marhaba.

It is used as a second greeting while meeting someone in Arab. It is used by locals to know if something new has happened since they last met each other. Just like as we say in English “spill the tea” “Sho el Akhbar” is used in Arabic.

The meaning of this simple salam is ” We come in peace”. Salam (سلام) is one of the nicest words to use while greeting someone. All the world agrees on the fact that it is nice to be greeted by the word “peace”.

It is usually used to greet people before noon. Because that time is still considered to be morning. It is said after the first or main greeting which is usually “Marhaba”. It is accompanied by a smile and a handshake in the Gulf states.

You can also use “fursa sa’eda” (Nice to meet you).

This word or phrase Tasharrafna “تَشَرَّفنا” brings out one of the most important concepts in Arab society, honor. Whole books have been written on what “sharf” means in Arab society. A common way of stating something when one wants his/her speech or anything one says to be taken seriously is to say, just before the statement,” bi-sharafee!”, ‘By my honor!’.

This is a kind of a question greeting in the Arabic language. Kayfa Haluk (كيف حالك) means “How are you?”. This is a question that can be asked by anyone from anyone. Kayfa Haluk (كيف حالك) is used to ask about the general well-being of a person. It is asked after the main greeting of Salam. It is asked differently by everyone. It has a great variety.

This is a farewell phrase used in the Arabic language. Ella Al-liqaa ” إلى اللقاء” has a literal meaning of “until we meet again”. And it is used for goodbyes. People use it when they end their meeting and wish peace and safety to the other person.

It is said to someone when one is somehow sure that there will be another meeting and they will see each other again. If someone is not sure about the next meeting, this phrase or farewell greeting is not used.

The phrase  (تصبح على خير ) “tisbah ala khair” is the closest equivalent to the way people use the phrase “night!” in English. It is used as a way to say farewell in the evening.

This is a favourite phrase of Arabs at night as it translates into “I hope you wake up to all that is good”. It’s a very hopeful and relaxing statement and it’s commonly used on departure if someone is leaving another’s house at night, or someone is leaving the room announcing they’re heading to bed.

Ahilaman saeidatan means “sweet dreams” in Arabic. It is a farewell phrase in the Arabic language. It is usually said to small children when they are about to sleep. And this phrase is mostly used by lovers when they are also sleepy.

This phrase is not commonly used by the elderly because it is used at the end of Arab storybooks. So saying this is considered to be childish. Or people also use it ironically.

The reply to it is the same phrase or a thank you:  شكراً shukran.

Masah al khair” مسح الخير” is an Arabic farewell phrase. “Masah al khair” is a kind of praising phrase which means ” May you have a good evening”. Masah al khair ( مسح الخير) is specially used in Saudi Arabia. Other Arab countries like Lebanon and Syria usually use the words like  “Tisbah ‘ala khayr” which means “good night”.

Allah Yuhifzik is an Arabic phrase that is said on two occasions. Once it is said when someone is about to leave on a long journey.

The second use of it is by the locals who meet each other after a long time so when the meeting is over they say Allah Yuhifzik ( اللہ یحفظک) because they are very unsure about the next meeting.

Subha al ward “صبح الورد” is a morning greeting. It is made of two Arabic words. “Subah” means morning and “ward” means “flower”. Collectively when it is said the person means “May you have a flower-like  morning”.

This is one of the most pleasing things to say or hear. This alliteration of flowers is used because some flowers open up all their petals as the morning comes. So this phrase metaphorically means that a person may smile like that flower. The answer to it is “Jazakallah” (جزاک اللہ) which is just like a thankyou in Arabic.

Allah mahak “اللہ مہاک” is a type of good luck wish which is said to someone who is hustling in something or bearing the hardships of life. Allah mahak اللہ مہاک has a literal meaning of ” May Allah be with you”. Allah Mahak is usually said to a person who rants a lot about his bad life conditions.

If you often have to come in contact with people from many Arab countries, knowing just one typical response to a default greeting might be helpful if you want to fit in.

Learning Arabic and about Arab culture has become extremely easy with the Ling App which teaches essential key points about the region and its language.

Ling app has diversified the language learning experience for all learners by teaching other languages too. Download the Ling App from Google Play Store or App Store and start learning the Arabic language now!