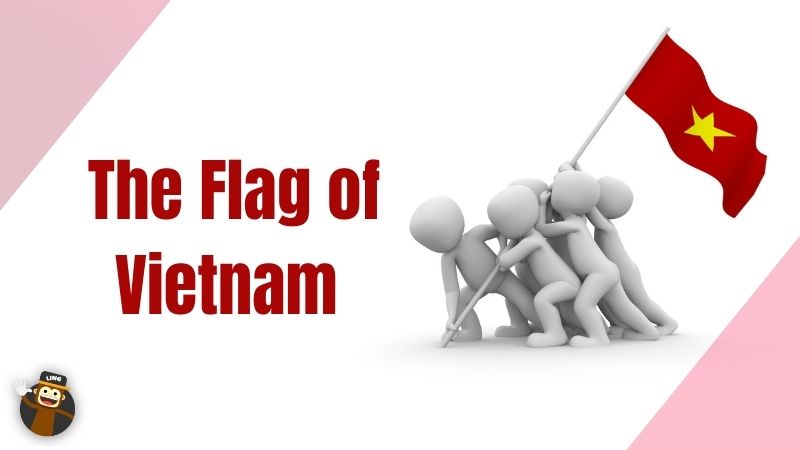 What is the history of the Vietnamese national flag? What does its design symbolize? If these are some of the questions that have been bugging you these days, you are at the right destination. Keep reading this post and learn eye-opening and shocking facts that you could never have guessed about the Vietnamese flag. The glory of the Vietnamese flag, its history, and its rich culture has always been a great story to learn. So, let's not waste any more time and dive right into it!

History Of The Vietnamese Flag

The national flag of Vietnam that has become the national pride of so many Vietnamese today has a long history that carries a special meaning and significance to the country's statute. The National flag that features an entirely red background with a large yellow five-pointed star at the center was officially adopted on November 30, 1995. As it goes with every other developing post-colonial country, the Vietnamese flag represents the struggle and revolution of millions of people for the nation.

The Vietnamese flag identified today by the global world represents an independent and unified Vietnam. It initially appeared first in South Vietnam on November 23, 1940. It was used as a local revolutionary flag against the French colonial rule in Southern Vietnam as Vietnam was a French colony back then. An uprising leader designed the flag, later arrested, namely Nguyen Huu Tien. As the first uprising ended in a disaster, he was executed by the French Government on August 28, 1941.

Later in 1941, the Vietnam flag was displayed at a conference where it became the flag of the Viet Minh forces, found and established under the leadership of Ho Chi Minh to support the Vietnam locals and fight against the horrendous rule of the French colonizers. Finally, on August 17, 1945, in the National Assembly meeting, the red-colored flag with a star was declared the official flag of the entire revolutionary period over the whole country.

Eventually, as World War II neared its end and the Japanese occupation failed, the Viet Minh entered Hanoi, and Vietnam was pronounced independent, making the red flag the national flag of North Vietnam. It was given the name of the Democratic Republic of Vietnam in September 1945.

Meanwhile, in South Vietnam, things took a different turn. The south government was re-occupied with French troops in October, and French rule continued. Officially called the Republic of Vietnam, the south was under control, and they had their flag. Their flag featured a yellow background with three horizontal stripes in red, inspired by old revolutionary flags in Vietnam's history.

Later in 1960, the democratic republic of Vietnam became the national government. The National Liberation Forces of Vietnam established a new government in the south instead of the Republic of Vietnam. They presented another revolutionary flag, a mixture of the red flag with blue lower half and a central yellow star.

When the American and the South Vietnamese troops were defeated in 1975 with the Vietnam war, the communists came to the spotlight, and the south flag disappeared. On July 2, 1976, the south and the north unified as the Socialist Republic of Vietnam, and the red flag was adopted in south Vietnam. Today it is raised throughout the nation.

Meaning Of The National Flag Of Vietnam

The bright red flag of the socialist republic of Vietnam found its birth when the first plain red flag became the symbol of left-wing politics against the French. Since then, the red color has become a primary symbol of the country. The modern red flag of today's Vietnam has its meaning rooted in Vietnam's history of struggle against the main classes of the French colonial government, and it has original and historical Vietnam features engraved in it.

The flag's design is rectangular with a bright red background and a five-legged yellow star at the center. The red and yellow colors have special meanings for why they became the nation's core. The flag designer, Nguyen Huu Tien, describes the red color as a symbol of blood. It symbolizes the bloodshed of the people and the struggle for the nation's independence. The yellow star represents "the color of our race's skin." The legs of the star have their distinction glorifying five principle classes, farmers, businessmen, workers, military, and intellectual.

Although quite plain to look at, the Vietnamese flags have always held a deep history of struggle behind it. It is, in fact, one of the simplest national flags in the world, but the red background and the gold star can tell a story that nothing else will. The Vietnam flag also holds another significant meaning to its design, which is to throw tribute to the soldiers who sacrificed themselves in the war and protected the peace and integrity of the county.

Today, the official flag of Vietnam is one of the historical flags that every Vietnamese person has faith, trust, and pride in. On every special Vietnamese holiday, locals proudly raise their national flag with a red background to give solace and respect to the bloodshed and the tears that filled every eye.

Interesting Facts About The Vietnamese Flag Now that we know the history of South Vietnam and North Vietnam, how they unified, how they fought against the french and gave rise to various Vietnamese flags, let us know some more fascinating facts about them.

The Flag Went Through Many Changes

The Vietnam flag went through many changes in its entire struggle course. The first edition of the flag presented in the 1940s had a large yellow star, bigger than what we see today. In 1955, it was made smaller with sharper and straighter edges. Even after independence, the bright red color was slightly changed.

There is a prevalent tradition in the Capital of the country, Hanoi. It is the flag hoisting ceremony that carries out every single day. It has also become a tourist destination. Many visit the area to see the ceremony from 6 AM to 9 AM. You will get to see Vietnamese soldiers and orchestras performing their national anthem and raising banners. This tourist attraction is open for anyone to visit.

After the long-run struggle in the south and north Vietnam, no wonder the flag of Vietnam gains a lot of respect and popularity today. Many Flag towers or city flagpoles have been located in different corners of Vietnam since the 19th century. On many, there are flag poles that hold the national flag. The Hanoi tower is the oldest and has about a 200-year old flag pole. The Hue tower of 1807, the Lung Cu tower, and the Ca Mau tower are popular.

The Glory Of Vietnam

Vietnam has faced several changes throughout its existence. From north Vietnam to a single unified country, it has fought many wars and countered many terrors to become like other countries in this universe. From yellow to one red flag with a large yellow star centered right in the middle, all the Vietnam flags have glories one cannot unsee. Apart from its struggle story, it also has traditional festivals and a rich cultural heritage that makes it more beautiful and unique.

Learn more about Vietnam, its flags, people, and language with the Ling App. This language learning platform has worked with experts from around the world to give you the most comprehensive lessons in 60+ foreign languages. Start learning Vietnamese today and become a beholder of its true magnificence.