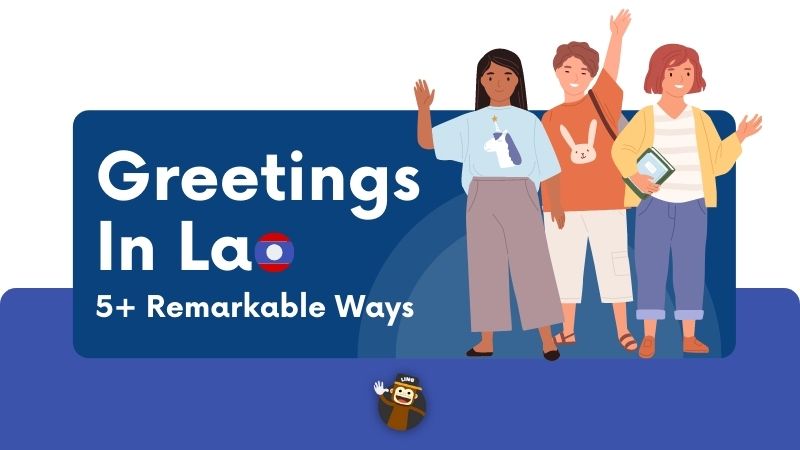 The land of a million elephants. Spirits, temples, and rice drive a country. The most frequently mispronounced place in the entire world. Laos (Lao) is the little brother of Southeast Asia you need to know more about. So before you visit Lao, why don't you learn some useful greetings in Lao? Should we start? Off we go!

In Lao, what is not said is just as important as what is said. The ‘nop’ similar to the Thai ‘wai’ shows respect and deference to whomever you are greeting (or thanking).

But don’t worry too much. In the heat of the moment (the temperature in Vientiane hovers around 30 degrees), a tourist will be forgiven for misplacing their hands. Remember: when traveling to a foreign country, it is the effort that counts.

Greetings In Lao You Need To Know

Laos is one of the most diverse places in the world, with up to 100 different ethnicities and languages. Here we will be focusing on lowland Lao spoken by the majority of the population.

For those who already know Thai, they will recognize the similarity with the standard Lao greeting:

An appropriate response (assuming you survived your first tuk-tuk ride) would be:

What you might hear after an initial greeting is:

A suitable reply would be:

Unless, of course, your name isn’t Michael.

Lao people, especially from the capital Vientiane, tend to be adept when it comes to pronouncing and understanding English names. The reach of Western culture is vast, although some of their references are a little surprising. (Every time I said my name, it was immediately followed by the reply ‘Ah, yes, Michael Jackson).’

Lao names are given in the Western order, the first name followed by the surname. It was only in 1943 that the French government demanded that every citizen must have both a first and last name, and still now, in some rural places, people may only go by a single moniker.

Other Ways To Greet People In Lao

A complicated element in Lao is the hierarchical title system. For example, if you are greeting someone in a position of power, you might say:

Then add the name of the people you want to greet.

There are also other titles for teachers, doctors, and police officers. If you happen to talk to an older man on the street without a professional title, you might use the title ‘aii’ (ອ້າຍ) meaning older brother.

Again, I want to stress that this should not put you off from communicating with local people. An effort is vastly more appreciated than accuracy. Even phrases as essential as these will see the local people of Luang Prabang lighting up in recognition.

There are few things in the world like the sunrise in Luang Prabang at Mount Phou Si… You want to get there just before 6 am to take in the full panoramic view in August.

Somewhere on the 328 step journey to the top, you’re bound to encounter a local person selling the sugary fuel it takes to make it all the way up, or perhaps a Buddhist monk (phasong) ພະສົງ clad in orange tending the grounds of Wat Tham Pou si.

An appropriate greeting would be:

Midday is hot in Luang Prabang. It is ill-advised to do any exploring after 12. But holidays are also for relaxing, right? Plus, you were up at 5 am to see the sunrise (tauaen khun) - ຕາເວັນຂຶ້ນ.

Beside the river and royal palace is the famous Saffron’s coffee, a fairtrade coffee shop that takes traditional café Lao and elevates it into an art form. Here, you will see a new generation of citizens carving a new future out for a place that was saddled with the title of the little brother of South-East Asia.

A nod and a warm:

Remember, In Laos, coffee, like most drinks, is served very sweet. The caffeine alone is enough to blow your head off, so if you want no sugar in your coffee, tell your barista: ‘bo min am tan’ (ບໍ່ມີນ້ ຳ ຕານ) Followed by ‘khop jai’ (ຂອບ​ໃຈ), which means ‘thank you’.

The only thing left to do now says:

That was your introduction, but there’s more. So much more! When I first went to Laos, I was armed only with mosquito spray and a dusty, old dictionary. The Ling language learning app has changed the game. With reading, writing, speaking, and listening resources, you can engage with the language in a fun and bite-sized ways.
Take a 10-minute lesson on buying groceries and then go to the ‘Khua Din’ market in central Vientiane and practice in real life. The Ling App has a structured reward system keeping you accountable! Then, turn the theory into practice. Turn those banana points into real-life bananas.

Who knows? Perhaps you become so enamored with Laos you decide to throw in the 9-5 and move to the jungle kingdom. You race through all of Ling’s lessons, and you’re starting to sound like one of the locals. Don’t fear. Ling is constantly updating its lessons, so you have infinite space to grow into.

‘To learn a second language is to possess a second soul.’ And everyone could do with being a little more Lao. Let us help.