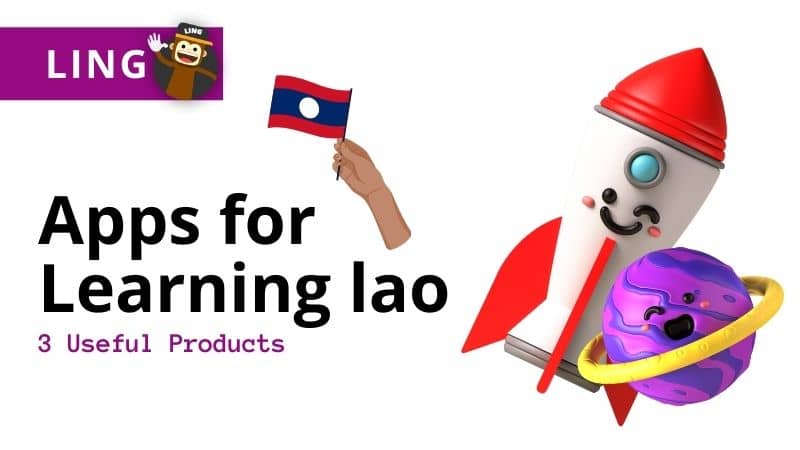 So, you want to learn a new Asian language? Perfect. You’re in the right place. Here’s our guide to the most useful Apps for learning Lao. We have some good news and some bad news. First, the bad news. Your options for learning Lao are quite limited. In terms of apps, there are only 3 options. And 1 of them has gained a number of bad reviews. However, the good news is that your other 2 options have amassed a host of high-quality reviews on the Google Play and App store.

Some Basic Information On The Lao Language

The first thing to say about Lao is that some people call it Laotian. However, this term has become slightly outdated. Lao is officially known as a Kra-Dai language which encompasses 93 million people. The most well-known of these is Thai, and there are clear similarities between Lao and Thai.

In Lao, there are 7 million speakers. Rather intriguingly, it is also spoken in NorthEast Thailand by 23 million people and is known as Isan. It is worth pointing out that there are multiple languages spoken in Laos, particularly by ethnic minorities; however, for the purposes of this article, we’re going to focus on official Lao.

Another important thing to note about Lao is that it is a tonal language, much like Vietnamese and Chinese. However, unlike those other 2 languages, there are 6 tones.

Again, when we refer to the Lao language, we’re talking about the Vientiane dialect, which has been the official one since the 1950s. However, other Lao dialects include central Lao, southern Lao, and western Lao.

Some Basic Information On the Country Of Laos

Laos, or to give it its longer title ‘The Lao People’s Democratic Republic’, is a country in Southeast Asia bordering China, Thailand, Vietnam, Myanmar, and China. Not only is the country landlocked, but large parts of it are also covered in dense mountainous jungle, which explains why historically, it was so hard to develop economically.

Modern-day Laos is descended from the Lan Xang dynasty, a kingdom that ruled the region for 400 years between the 14th and 18th centuries. The biggest change to the region was when the French colonized it in 1893. This rule of power was briefly interrupted during world war 2, and Western colonialism finally ended in 1975 when the communist government took full control.

In recent years, Laos’s relationship with China has seen it become a very interesting country to watch. It has a similar system of governance to China, i.e., a one-party socialist republic, and China has invested much in the country in the last 15 years, including a new superhighway between Vang Vieng and Luang Prabang. This heavy investment has seen the Lao economy grow approximately 7% year on year since 2009, making it along with some of its neighbors like Vietnam, one of the fastest-growing economies in the world.

Utalk is one of those language apps that seems to have come out of nowhere. Since its inception, it has gained 100s of reviews on the app store.

Utalk’s main selling point seems to be its sheer number of languages at 130, which outstrips many of its rivals by more than double. It offers topics on various subjects, including travel, business, and socializing, and claims to have content recorded by native speakers(which is difficult to verify because of the sheer amount of content). It also has interactive games, which make it appealing.

However, now to the drawbacks. Utalk is tanking on the Google Play store with an average review score of 3.8. Users report very limited functionality in the free version and issues with bugs, and some even commented that the app wanted access to contacts and photos when installed.

Simply Learn Lao is a phrasebook brought to you by Simya Solutions. It has an average rating of 4.5 on the app store. For those of you who have used Ling, it’s good to think of this as Ling Lite. For Lao, there are 1000 phrases with over 30 categories and content recorded by native speakers. It won’t get you fluent, but it might help you out of a difficult situation if you find yourself traveling around Laos.

About Ling: Ling was first conceived of in 2017, a part German and part Thai project, with headquarters in Chiang Mai. Now the app is approaching 10 million downloads and has become the #1 go-to app for students who want to learn lesser-known languages.

Ling has 60 courses on its app, and although we mentioned earlier that Utalk had 130, they are nowhere near as comprehensive or well functioning as the courses on Ling. Ling also guarantees that all of its content is provided by native speakers. No awkwardly generated robotic voices.

Ling harnesses state-of-the-art interactive learning techniques that are at the cutting edge of language learning apps.

Another key feature is your ability to learn Lao words written in the Lao script. The most difficult thing with Lao is not just that you have to learn a new language but an entirely different alphabet. You’ll find Ling’s practice games for this are vital.

If you hadn’t worked it out from this glowing praise, we think Ling is the best Lao language app. In the 21st century speaking your native language just doesn’t suffice.

Note: This blog is updated weekly. Let us know if you’d like more. Also, if you enjoyed this, why not check out some other popular blogs including Planets and Space vocabulary in Lao and Lao vocabulary for the Airport.